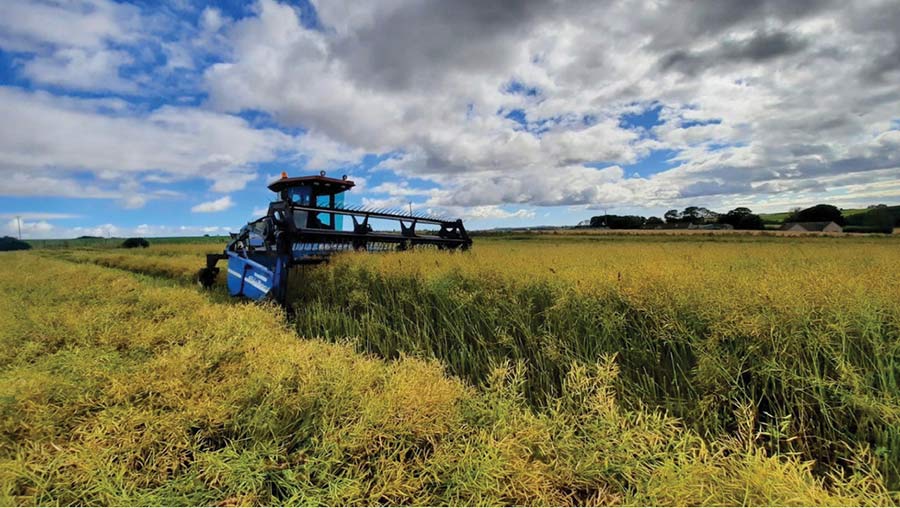 After seeing the success of organically grown rapeseed crops in Sweden on a trip last year, independent agronomist Andy Cheetham, of Ceres Agri Services, established organic oilseed rape trials in north-east Scotland, to prove the feasibility of growing the crop.

“There is a growing market for organic oilseed rape,” he points out. “It has a significant premium of about £520/t over conventionally grown crops and is an excellent replacement for imported organic soya meal, and is also used as cooking oil.”

The varieties were: Aurelia, Ambassador, Artemis, Darling, Dazzler and Elevation, as well as the spring varieties Mirakel, Lumen and Similla.

Autumn crop yields averaged 2.5t/ha, ranging from 1t/ha up to more than 3t/ha, with Aurelia coming out on top and with Ambassador and Artemis not far behind.

“The Aurelia did much better than many conventionally-grown OSR crops in this area, so quite a few local farmers asked what variety it was – and they couldn’t believe it was organic,” Mr Cheetham says.

The Darling and Dazzler mix grown on another farm had a much lower yield due to disease.

As expected, spring-sown crops yielded slightly lower than the winter crops, at 2.4t/ha, which was better than the team had expected.

“The results were unreal,” Mr Cheetham says. “The spring crops were quick-growing, taking just 62 days for them to flower from their sowing date.”

Robin Walker, a researcher at Scotland’s Rural College (SRUC) Aberdeen, who helped lead the project, explains that the investigations were not replicated trials, as the exact same management strategy was not carried out across all farms.

“The farmers had slightly different angles they were interested in, plus they were located on different soils with different climate characteristics,” he says.

Apart from two plots which failed to get going, Dr Walker says all other crops were successfully harvested.

One Elevation crop experienced a few problems not directly related to the variety. Volunteers from the previous winter oat crop hampered the rapeseed, meaning it was not harvested.

Another site in Angus had a few weather problems immediately after drilling, with 70mm of rain in a 24hr period. This prevented rolling and subsequent weeding, meaning the crop was used as a green manure instead.

Mr Cheetham explains how harvested crops were cut using the widest swather available, followed by the combine using a Draper header. Chaff spreaders were shut off to concentrate the volunteers to the combine windrow width. Swathing improved the harvest efficacy as it reduced the risk of pod shatter, minimising yield loss and volunteers.

“Quality of the crop was good. Oil content was guaranteed to be 43-46%. All the straw was baled and removed, the fields were lightly harrowed to get any volunteers to germinate, and some fields were grazed off with sheep,” he says.

He highlights how lessons can be learnt from organic production systems. Growers are gaining more interest in organic oilseed rape, with one of his conventional farming clients now growing conventional oilseed rape organically for the first time.

When it comes to growing a successful organic crop, Mr Cheetham highlights that the number-one priority should be in-depth soil analysis. This provides a foundation of knowledge on soil health, enabling optimal plant health and, ultimately, yields.

“As well as soil testing, we analyse tissue at strategic growth stages and apply any nutrients deemed essential through an organic derogation,” he says.

Phosphate is particularly important. One trial grower, Murray Cooper, had significantly low phosphate levels even though he had applied rock phosphate for many years, meaning a derogation of a foliar phosphate spray was granted, on the back of evidence from soil and tissue analysis.

Nitrogen is often the limiting factor in organic crops so ensuring soil nutrients are readily available is critical. 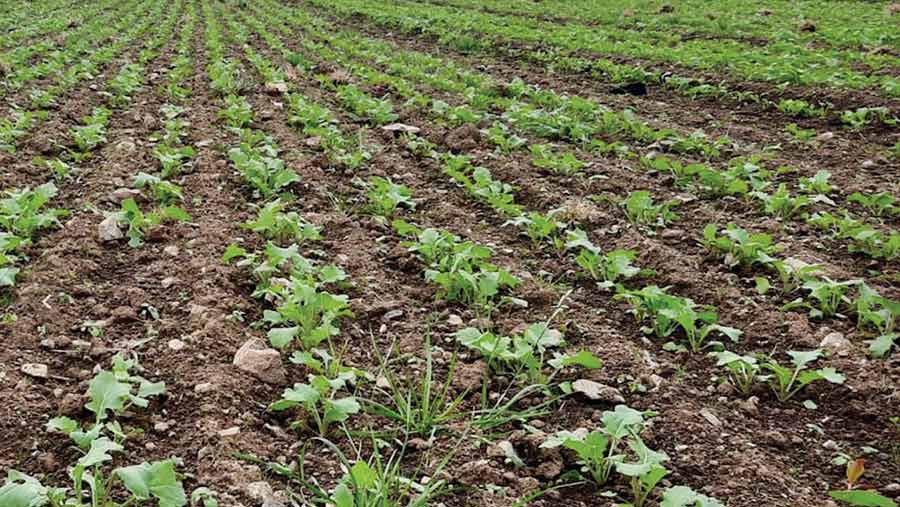 This is why an organic starter treatment mixture containing micronutrients is applied to the seed-bed to help get the crop going, while also protecting it from flea beetle.

In addition, all sites received a sulphur-based foliar nutrient product at the 5-leaf stage, at stem extension and then again during petal fall, to reduce risk of sclerotinia, as well as acting as a deterrent for pollen beetles.

Mr Cheetham now plans to do more with nutrition, feeding crops a little earlier. As soon as there is enough leaf an “organic cocktail” will be applied, with the aim of driving yield up by 20%.

Trials are being repeated this season. Crops are looking well with leaves already the size of an iPad and visible differences apparent in just 10-day intervals.

Another key factor to achieve good yields is choosing a variety with good autumn and spring vigour.

The organic control of weeds, pests and disease can be a challenge, but with healthy soils, help from a few cold frosts and organic control methods, the project team managed just this.

“Weeds are not really a problem as our cold frosts work well at controlling weed populations, particularly nettles,” says Andy Cheetham. “One of the farmer’s is using an 8m Cameleon drill for weeding.”

However, he admits that there can be issues with volunteers and says he also experienced a self-induced weed issue, where an inter-cropping trial with clover and oilseed rape didn’t work out as planned.

The intention was to enhance OSR yields by incorporating the leguminous clover, containing nitrogen-fixing bacteria, with the crop. Instead, wet conditions meant the clover swamped the rapeseed crop and the targeted 48-52 OSR plants/sq m fell to just 16-20 plants/sq m. What was left was a field full of clover.

Like weeds, pests do not pose much of a problem. Slug populations are managed using ferric phosphate, which is approved for organic use, while a secret remedy is deployed to deter flea beetle.

Slugs were a major issue at the Angus site which was not harvested, as a result of the very wet weather.

Disease-wise, Mr Cheetham stresses the importance of variety choice and highlights that too much nitrogen can cause disease in rapeseed crops because the larger canopies favour disease.

“It’s worth remembering that fungicides do not enhance yield, they only preserve yield. It is in fact nutrition which enhances yield,” he explains.

He uses a few organic fungicides, including one based on seaweed and other trace element mixes.