The high levels of light leaf spot in oilseed rape crops this season increases the risk of the costly disease hitting crops next year, which is why growers are being urged to make the most of varietal resistance.

Light leaf spot is the most costly OSR disease in the UK, costing growers £140m in lost yield. This year’s wet spring provided ideal conditions for the disease to flourish in crops, as it is spread by rain splashes.

Infection usually starts in crops at low levels from November and requires treatment into the spring months.

However, this year some growers missed their autumn sprays because it was so wet. While these autumn applications are primarily aimed at phoma, they also help control light leaf spot.

The implications of these high infection levels for next season’s crops are considerable, as the fungus that causes the disease will continue to cycle in the crop for the whole season if weather conditions are conducive.

It survives on debris after harvest and is then ready to infect nearby crops emerging in the autumn.

With this background pressure, growers are urged to consider the role genetics can play in helping to defend against the disease.

“Fungicides, of course, can play an important role in controlling the disease, but inherent genetic resistance will give an underlying protection that is invaluable when conditions are not favourable to spraying the crop, or the disease is not spotted.

“Last year we didn’t see such an effect on yield from light leaf spot in England, despite there being significant disease in crops in early spring.”

February and March were cold and dry, so leaves tended to drop off and the levels of infection were reduced. This year with the cold, wet spring, plants have held on to their leaves and it has been easier to see the symptoms develop and get progressively worse, he explains. 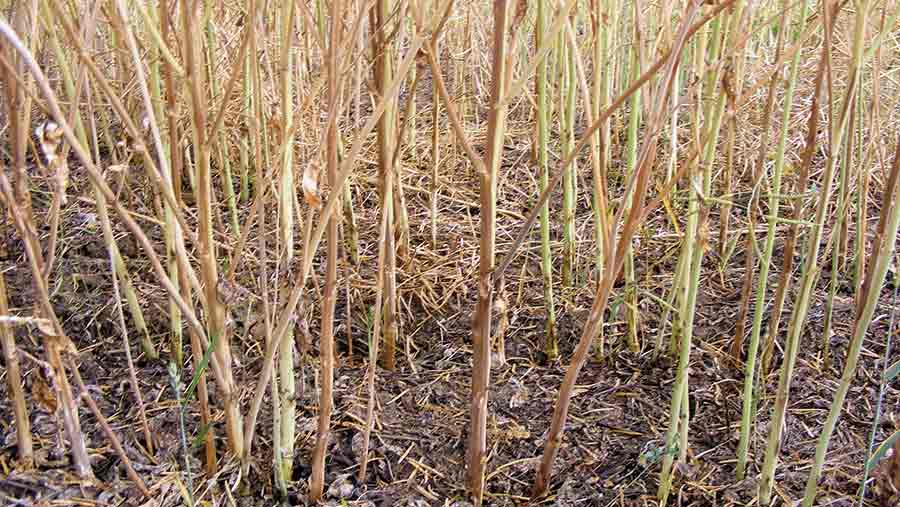 Adas plant pathology researcher Julie Smith agrees. “We have seen big yield losses from the disease in recent years, particularly when fields have been too wet to travel and fungicide timings have slipped.

“Even the strongest products will not perform well in highly curative situations, so it is important not to let the disease become established early on.”

She says as a rule of thumb, 15% of plants affected at stem extension equates to a 5% yield loss.

“I saw commercial crops in the spring that were close to 50% affected.

“In some years we only see disease in the lower- to mid-third of the plant, but I have seen several crops this season with actively sporulating lesions on upper leaves.”

These crops are particularly at risk of the fungus reaching the pods, which, once infected, are likely to senesce prematurely and shatter, causing significant seed losses, she says.

This high infection has also been seen in Agrii variety trials, including in the South, which is normally associated with a lower light leaf spot risk.

“We have five key trials sites: Cambridgeshire, East Yorkshire, Perth & Kinross, Wiltshire and Kent. We have plots of all of the main commercial and candidate varieties.”

With up to 40 varieties in the ground, Dr Leaper can see how the resistance ratings are standing up to the current pressure, as well as assess if future varieties are going to offer any more resistance than current varieties.

“We conduct both untreated and treated comparisons, but the fungicide regime used on the treated plots is more similar to that on farm, so we do see different results to the AHDB  trials that receive a fully comprehensive programme.”

Plots were scored in March/April with a rating of 1-9 (with 1 being no infection and 9 being severe).

“The results have been alarming, as there were only four varieties that showed infection of 2.5% or less,” says Mr Leaper. These were Catana, Nikita, Webley and Alizze.

Of these, conventional variety Nikita stands out with one of the lowest infection levels at 2.3%, taking into account both treated and untreated results.

Looking at this variety in more detail at both the Swindon and Kent treated sites, only 1% of plants were infected, and this only went up to 3% of plants infected on the untreated plots, clearly demonstrating the robustness of its 7 rating for light leaf spot.

“Interestingly, varieties with a resistance rating just one point lower did not perform nearly as well. For example, Campus – which is rated a 6 on the Recommended List – showed 6% infection in the untreated plot and 5% in the treated one.

“In addition, none of the candidate varieties offered any better results than current recommended varieties.” 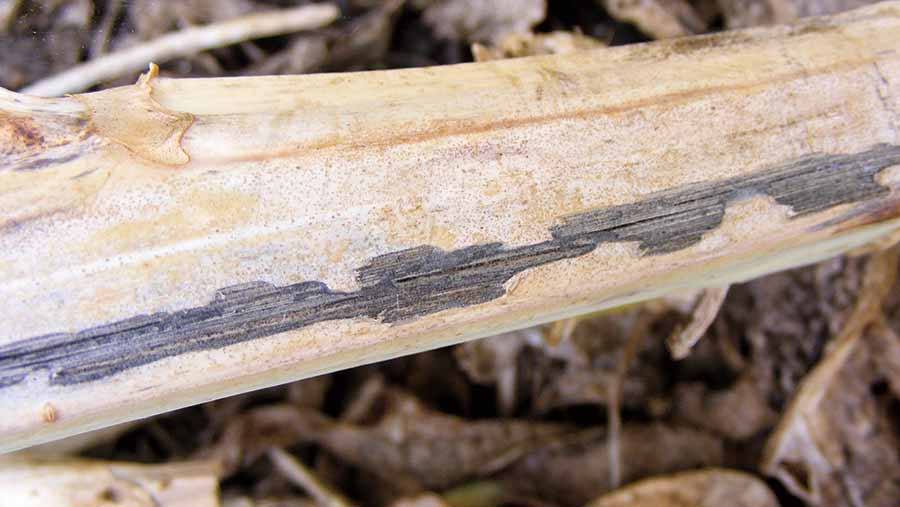 His advice to growers is to consider varieties with a higher resistance, such as Nikita. He believes even growers further south should look at this variety, despite it missing out on the east/west list because of its lower phoma rating.

“We know that in an open autumn a vigorous variety such as Nikita will grow quickly. The likelihood of phoma developing into the yield-robbing phase of the disease – stem canker – is much reduced,” says Mr Leaper.