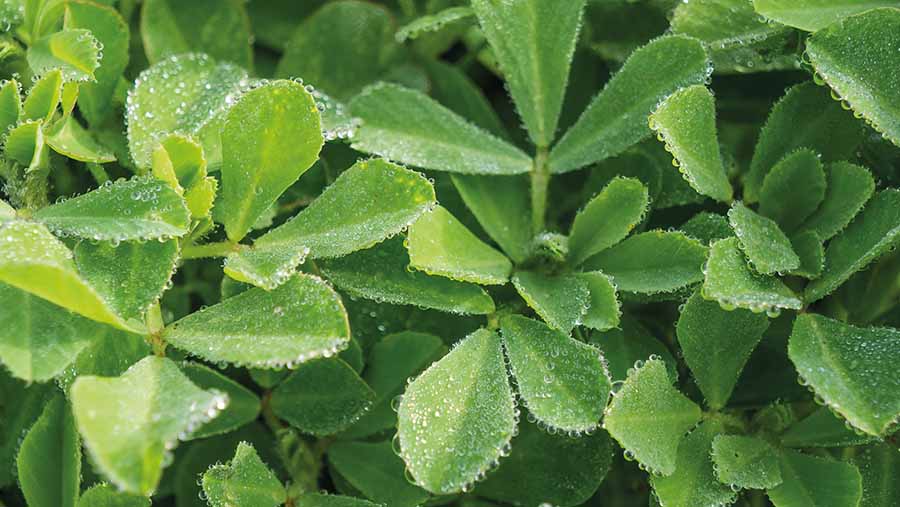 Companion cropping has received a mixed response among growers, most of whom have not been familiar with growing two crops simultaneously in the same field.

Farmers are understandably wary of weed issues or creating too much competition from the companion crop.

However, where growers are striving to control pests without insecticides – due to the loss of neonicotinoids, increasing pyrethroid resistance or simply because they are not keen on using chemical methods – it may be time to consider companion cropping.

Over the past few years, Kings Crops has looked at different companion crop species and mixes to evaluate how they can assist with integrated pest management (IPM), says Clive Wood, business development manager and northern area technical adviser at the company.

Too many species in a mix can lead to competition with oilseed rape, he says.

“It is a fine line and something we have taken seriously at Kings when choosing suitable species. A typical Kings companion crop mixture is fenugreek, berseem clover and common buckwheat.

What is companion cropping?

“We want enough cover, which can assist with weed control, without it being too thick and competing with the OSR plant.”

A key goal is to create a habitat within the OSR crop that can help encourage beneficial insects beyond field margins and deliver other benefits, explains Mr Wood.

“We have been looking at how companion crops can introduce beneficials further into the field, assist weed control and facilitate nitrogen fixing. We are also looking at how they could help rooting in OSR.”

Early flowering from buckwheat allows growers to create a habitat that gives beneficial insects such as parasitic wasps, ladybird and hoverfly a way of existing in the crop.

Buckwheat should be sown at the same time as OSR and flowers within three to four weeks of planting, explains Mr Wood.

“The faster growers can create a new habitat for predatory insects, the faster they can obtain some control of CSFB [cabbage stem flea beetle].”

Companion crops can attract many specialist and generalist predators of CSFB adults, eggs and larvae.

When used alongside methods that create minimal soil disturbance, farmers can further encourage the presence of these beneficial insects, he says.

Buckwheat is also beneficial for phosphate mobilisation and is frost sensitive, so breaks down readily to ease competition with OSR through the winter.

Buckwheat and fenugreek produce root exudates and Kings is continuing to look at how these might benefit OSR root systems, says Mr Wood. “It is a complex process and we hope to learn more about it.”

A key contribution from fenugreek to CSFB control is the odour it produces, he adds. “It is very similar to curry powder and is a deterrent to flea beetle.”

He is reluctant to recommend particular mixes or straights in general terms, saying that growers need to work with seed companies to discover which perform best on their farm.

“We have done a lot of plot work and seen large benefits in not solely having OSR in the ground. Growers need to look at their drivers and goals.

“They will have their own preferences concerning straights or mixes and quite a few have worked out what option works best on their farm.”

While companion crops are not a replacement for traditional methods of controlling CSFB, they have an important role, says Mr Wood.

“It is about increasing the percentage of control. None are seen as a complete replacement for traditional methods – we have not found a way of controlling CSFB without insecticides – but they can contribute to IPM.

“In the past three years, we have seen the use of companion crops growing quite dramatically,” he says. “Growers are adopting them.”

Frontier 3D trials have looked at how companion crops can be used within existing herbicide strategies, says Mr Wood.

“It is important to be able to control the more problematic weeds and avoid high glucosinolate problems, for example.

“Most of the companion crop species mentioned are weakly competitive types and not frost tolerant, so wouldn’t need to be sprayed out. Ensure you have a careful plan in place with your agronomist.”

These species also don’t tend to give rise to volunteers, but can benefit the following crop, often first wheat, he says. “Invariably, growers get the follow-on benefit of nitrogen fixing from vetch and berseem clover.”

When drilling companion crops it is important not to mix their seed with the OSR seed, he says.

“We’re not at the stage where we can mix them, as sown mixture compositions can be very variable. If you have a drill with additional seed hoppers, this will allow you to look at sowing a range of seeds at different depths and rates.

“Alternatively, companion crop seed can be broadcasted using a quad bike or a broadcaster fitted to a roller, allowing one-pass sowing.”

With the value of oilseed rape at £900/t, some growers who had abandoned the crop are coming back, adds Mr Wood.

“Companion crops give a chance to have an increased level of CSFB control. We’ve got to be in a position to provide all available solutions to combat problems when there is such demand.”

Benefits of companion cropping with OSR