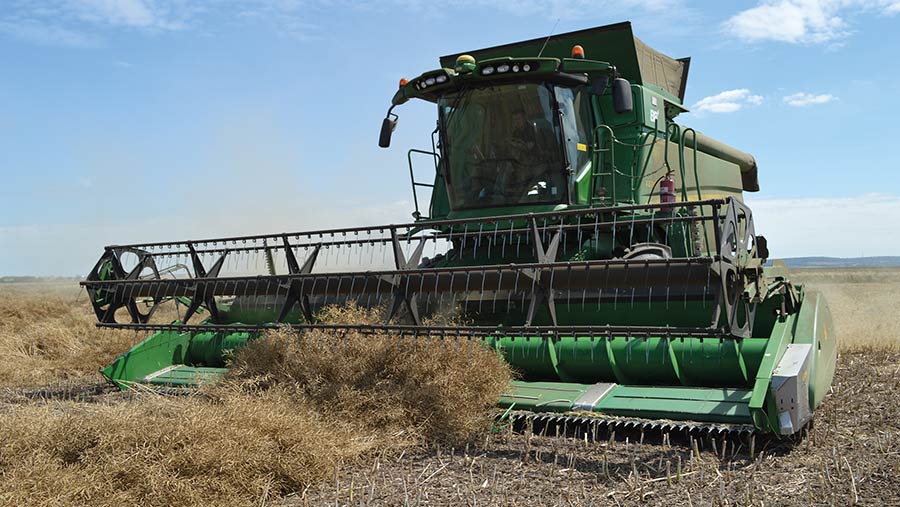 The oilseed rape harvest picked up pace this week under sunny skies, with a number of good-looking crops producing only average yields after an extremely difficult growing season.

Following a scattering of early, very disappointing crops, many yielded in the 3.0-3.5t/ha range. The average rapeseed yield last harvest was 3.3t/ha.

Down on the Isle of Sheppey, Ryan McCormack is seeing average yields, even after a three-year break from the crop, and not too much of a pest problem from the ubiquitous cabbage stem flea beetle.

He cut his first block at 3t/ha and a second at 3.4t/ha. His overall yield will likely settle at 3.2-3.3t/ha as he finishes cutting 180ha this week on some fertile, heavy clay loams on the north Kent coast.

“Yields look average for the farm, but I did not expect them to be spectacular given such a difficult year,” he says.

Only 20ha of the crop was lost to flea beetle damage, and he has a 50:50 split between the conventional variety Elevation and Clearfield variety Phoenix, cutting at 7% moisture with an oil content of 43-44%. Clearfield varieties can be grown using certain herbicides to control troublesome weeds, such as charlock.

For the coming season, Mr McCormack will be aiming to drill very early – in July – on a reduced area following 100ha of early-maturing winter barley. He will use a conventional variety and is looking to establish the crop without heavy expense and before any major attacks from flea beetles.

The oilseed rape crop is being grown on Burden Bros Farms on the eastern side of the island, along with milling wheat, winter and spring barley and forage maize to feed a 750-head sucker cow herd.

All the crop is swathed some two to two-and-a-half weeks before harvesting with the farm’s John Deere combine to protect the crop from wind and the occasional hailstone storms in the River Thames Estuary, while straw can be baled immediately for the horse-bedding market.

Oilseed rape straw that had been swathed (left) is ready to bale immediately, while an area treated with glyphosate for direct cutting is still green at Burden Bros Farms

Further west on the island, James Attwood has two Claas combines in action to finish cutting 200ha of oilseed rape this week, with early yields of about 3t/ha.

The crop is being direct cut, two-and-a-half weeks after glyphosate was applied, and all is of the conventional variety Elgar, cutting at 7-8% moisture.

The harvest has come five to six days earlier than usual, and he and his team were racing through the crop in ideal cutting weather under this week’s hot sun.

”With weather like this, the crop cuts nicely, and we have not seen too much of a problem from flea beetles this season,” he says.

The oilseed rape area has been trimmed this year as maize and rye have been expanded to feed the anaerobic digester plant on the 1,600ha farm, run by SW Attwood and Partners.

Next season, Mr Attwood is planning a similar area of Elgar and wants to establish the crop without great expense by using farm-saved seed. 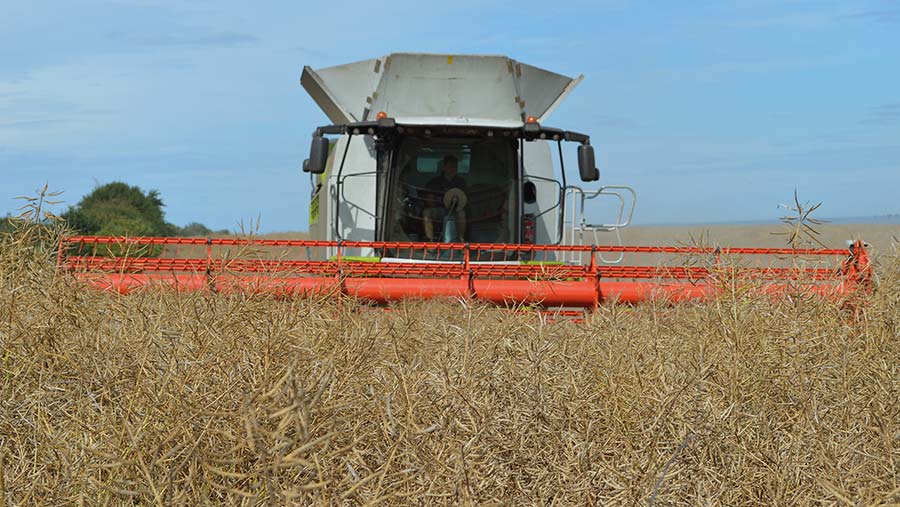 Just north of the River Thames in Essex, farm contractor George Matthews has cut a 50ha block of the conventional variety Campus at about 7.5% moisture, but he warns that it might be a protracted cutting season.

“We are happy with the yield of just over 3t/ha, but it is looking like being a drawn-out season, with another 100ha block of Campus on the farm still one to one-and-a-half weeks from harvest,” he says.

Mr Matthews and his company, GPHM Contracting, operate across a number of farms in Essex.

Further west, Oxfordshire grower George Farrant is pleased with his OSR yield of 3.5t/ha, and plans a bigger area next season after nearly abandoning the crop.

He finished combining all 120ha of his Clearfield variety Imperial at 7-10% moisture this week, with his oilseed rape coming to harvest before winter barley for the first time.

“We are very pleased with the yield, as we were on the verge of giving up on oilseed rape altogether, and the yield could have been even better without the drought in April and May,” he says.

This season, Mr Farrant halved his area of the crop after suffering from low yields due to damage from flea beetles. He also changed his growing strategy to use a starter fertiliser at drilling time and also sow the crop earlier, in mid-August, rather than at the end of the month.

The oilseed rape crop was cut by Mr Farrant using his new Claas Lexion 8700TT combine on its first outing this harvest.

For the coming season, he is taking on more land and plans to increase the farm’s OSR area to 200ha. Mr Farrant currently farms 1,000ha at Manor Farm, Drayton St Leonard, about six miles south-east of Oxford, on a range of soil types, from light, sandy silts to heavier ground, and trades as SJ Farrant and Son.

Owen Cligg, trading manager at co-operative United Oilseeds, predicts the crop area for harvest will be as low as 320,000ha, and with an average yield of 3.2t/ha, this would give a crop of just over 1m tonnes – half that of two years ago.

An AHDB planting survey was more optimistic, saying the area in England and Scotland fell 26% to 387,000ha, but also added that 41% of crops were poor or very poor, and traders say some of those could have been abandoned.

The prospects of a small harvest and a disruptive fire at Britain’s biggest oilseed rape crushing plant has helped push prices up to just over £320/t ex-farm before any oil bonus.

ADM’s giant oilseed crusher at Erith in Kent is closed for the immediate future, and this plant on the River Thames, on the edge of London, has the capacity to crush 1m tonnes out of the UK’s capacity of about 1.9m tonnes. This could put strain on other crushers at Liverpool, Hull and Stratford-upon-Avon.

Philip Kimber, oilseeds manager at trading group Frontier, says there is good domestic demand for oilseed rape for food-quality vegetable oil and as a protein source for livestock feed.

“We have the demand and the crushing capacity – we just need the seed,” he says.

Traders believe the area drilled this summer could drop below 300,000ha, with some growers disillusioned by problems with flea beetle and early establishment. However, others say it will depend on the weather.

“If there is a window for drilling into moisture this summer, then some growers will decide to drill and look at low-cost establishment techniques,” says Mr Cligg.