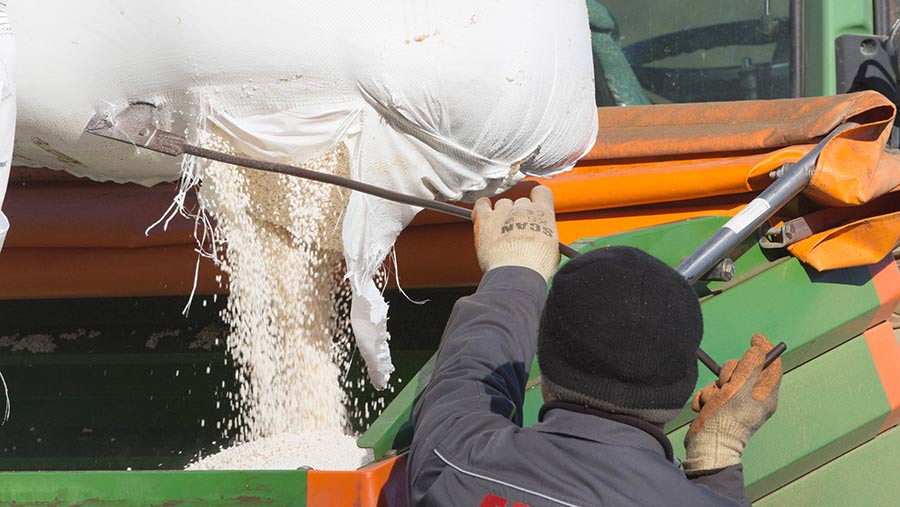 Oilseed rape growers are being urged to check plants for cabbage stem flea beetle larvae before finalising their spring management plans for the crop.

The accepted practice of measuring the canopy in February before treating it appropriately for its size still applies, but some fine-tuning of nitrogen timings may be required where larvae numbers are high.

Unlike pest-free plants, affected crops will be slower to get going in the spring and could benefit from an early 50-60kg/ha of nitrogen – regardless of canopy size.

Backwards crops, or those with a green area index of less than 1, will also need a kickstart.

Otherwise, the target GAI of 3.5 by flowering applies, which is why measurements taken this month, before the start of stem extension, will allow rates and timings to be tailored to achieve the optimum canopy size and structure.

Overlarge canopies are at risk from lodging if nitrogen applications start too soon, while excessive flower numbers are linked to low seed set and poor seed fill.

The easiest way to measure green area index is to take a photo of the crop and upload it via an app or online for comparison, advises Charlotte White of Adas.

Another method, considered to be more accurate where canopies are already at 2.5 or above, is to cut 1sq m of foliage and weigh it, before multiplying by 0.8.

“It takes 50kg of nitrogen to make each unit of GAI and the aim is to have 175kg in the crop by flowering,” she adds.

“Where there are large canopies already, it is best to delay nitrogen and perhaps put on slightly less.”

In the West, oilseed rape crops are looking good and have put on plenty of leaf in the mild winter conditions to date, reports agronomist Andrew Goodinson of Hutchinsons, who is in no hurry to see fertiliser applications begin.

“We’ll be holding off with these ones – there’s enough nitrogen in the crop for now. Even if there are larvae about, they’re in the petioles rather than the stems.”

His approach with the smaller, more backwards crops – which are at greater risk – is to split the first dressing and give them an early dose.

Otherwise, low disease levels required one fungicide in November, depending on the variety. “We’re monitoring for any signs of light leaf spot and will spray with a prothioconazole-based treatment if required.”

Deciding whether to use a plant growth regulator, such as Caryx (mepiquat + metconazole), will be the next stage.

“On big, forward crops, we’ll go sooner to get the growth regulation and height reduction. For canopy manipulation purposes, it will be a later application.”

Where a fungicide with growth regulating properties is applied at the same time, the rate of Caryx will be altered, he says.

In the East, oilseed rape crops harbouring high numbers of cabbage stem flea beetle larvae will need some early nitrogen to help them grow away, regardless of plant size.

As these crops are less vigorous in the spring, an initial dressing of 50-60kg N/ha should be applied as soon as possible, followed by close monitoring to see how they respond.

Although yield potential will have already been hit, it is still possible to get a respectable result where there are good plant numbers, believes Velcourt agronomist Ryan Hudson, who recommends that growers fine-tune their management if larvae numbers are high.

“It’s better to drip-feed the nitrogen in two or three splits and rein back the total a bit to reflect its revised potential,” he says. “Give the crop every chance of building new growth and putting on some green leaf.”

He cautions against the use of a plant growth regulator, even though stems are likely to be a bit weaker and there is a higher risk of lodging. “At this stage, it’s about getting the crop to grow away strongly, rather than checking them.”

He recalls a 30ha crop last year that was badly affected by the larvae, but although they wiped 1t/ha off the yield, the crop was still worth it.

“That wasn’t in a grassweed situation though,” he acknowledges.

“If a crop has been hit hard by flea beetle and there’s blackgrass, any delay in spring growth could see blackgrass coming through. Those situations will need a closer watch.”