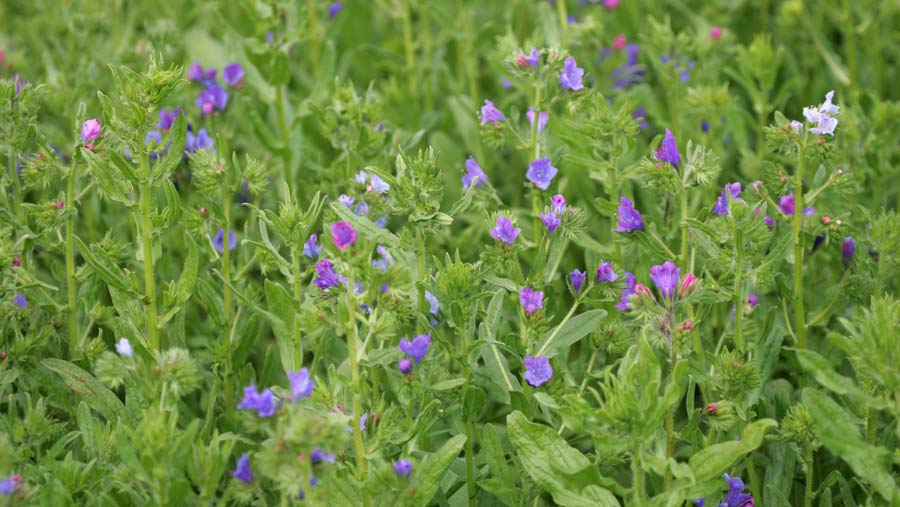 Growers Peter and Andrew Fairs grow niche crop echium on their Essex farm for the pharmaceutical market, which uses its prized oil in cosmetics.

The father-and-son team’s business, Fairking, based near Colchester, focuses not only on growing, but also processing and marketing niche crops, as well as offering a small range of contracts to other UK growers.

This season, Fairking is offering additional contracts for new echium growers. The company currently has a list of 50 loyal famers across the UK, supplying their company with niche crops.

Due to increased crop demand, the echium area is now set to rise.

Native to the Mediterranean, the spring-sown crop is a relation of borage and shares similar characteristics to the crop, including hairy stems and leaves, with nectar-rich flowers that attract many pollinating insects.

“The crop is an excellent break crop, which grows to about 75cm tall to produce a spectacularly pretty purple flower,” explains Peter Fairs.

He continues that it is grown for its seeds, which are rich in oil and contain stearidonic acid and gamma-linolenic acid, used in the cosmetic and pharmaceutical industry.

Its extracted oil demonstrates positive health effects, with excellent anti-flammatory properties, as well as being an alternative for fish oil and a good source of omega-3, omega-6 and omega-9, and demand is growing.

The company is now looking to take on new growers this season, especially as there is limited echium oil produced in the UK.

“In fact, I do not know of any other echium growers in the country,” he tells Farmers Weekly. “When we started to grow the crop, five years ago, we really had to search the world to find seed as it was a very niche crop.”

A total of 150ha of echium was grown last year, consisting of 70ha grown at Fairs Farms. This season, Mr Fairs hopes to considerably increase this area to 450ha.

About 220ha have been confirmed so far, leaving more than double the area again to fill with growers.

How to grow echium

Although it prefers free draining and drier soils, echium has considerable versatility in what soils it grows in, with slightly more drought-resistance characteristics compared with that of borage.

Mr Fairs explains that crop yields are low, averaging 300kg/ha, but adds that it is sold at a premium price of £3,800/t. The crop is best sown between March and April, when the ground is beginning to warm up.

“The seeds are very small, about the size of a rapeseed and triangular in shape. They should be sown 3-4cm deep into a moist seed-bed, applied at a rate of 15kg/ha,” he adds. 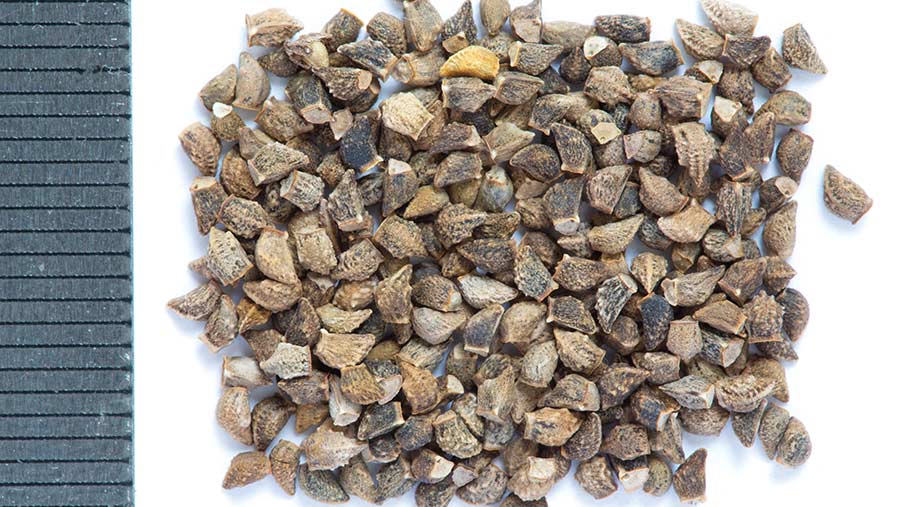 However, Mr Fairs admits that echium does not have the best germination percentage, at a 50% rate. He finds that the 15kg/ha seed rate works well, but in times of poorer germination the rate is upped.

Echium is an aggressive grower, with a good competitiveness growing away from weeds. This helps compensate for the lack of available chemicals approved for use on the crop.

Currently, the herbicide Centurion Max (clethodim) is approved and the fungicide boscalid for the control of sclerotinia and mildew.

Disease pressures are relatively low in the crop, with levels considerably lower than that found in borage. A range of fungicide products are now awaiting approval from the authorities before they can be used.

An application of boscalid during early stem extension and no later is used at Fairs Farms in order to reduce risk of chemical residues in the crop.

Oil market regulations concerning contaminate residues are becoming increasingly stricter, making active use and timings even more of a challenge.

A major benefit of growing echium is that there are also no pest populations that threaten fields of the crop, eliminating the need for expenditure on pesticides.

Mr Fairs continues that due to the crop’s relatively low biomass, nitrogen fertiliser requirements are particularly low, with a maximum of 50kg/ha applied, where no other nitrogen sources have been used.

“As we are not taking much weight off the ground at harvest, echium is not a large consumer of nitrogen, phosphorus and potassium (N, P and K).

If farmyard manure is applied then there is no need for any nitrogen fertiliser applications, with no need to specifically apply P and K if levels are sufficient,” he says.

Chicken manure is applied to land at times to increase soil organic matter, but access to livestock manure can be challenging as their area is predominantly arable-based.

Mr Fairs highlights that crops begin to flower during July (sowing date dependent) with the flowers attracting bees, hover flies and other insects from considerable distances to pollinate the crop.

“Echium offers huge environmental benefits. During flowering the hum coming from the crop is just spectacular as pollinating insects come from miles away,” he says.

Harvest usually commences during the first week of August. As echium is an indeterminate plant, where it continues to flower and set seed throughout the growing season, a swather is used to cut the crop pre-harvest.

“Before swathing, we used to spray off the crop with either glyphosate or reglone, but this was ineffective,” he adds.

Once in the swath, the crop should be left to wilt for about four to five days, depending on the weather. As echium has relatively low moisture levels due to its long and fibrous stalk, it doesn’t take long before it is mature.

Unlike borage, echium also has varies in yield each season. It also has a relatively low propensity to shed seed which means volunteers pose little threat.

However, Mr Fairs warns that seeds can be shed while the crop is in the swath, so it is important to ensure swathing takes place as soon as the crop is dry enough.

Fairking was established by Peter Fairs in 1982, where he started growing a range of niche crops, including quinoa, borage and chia.

Today Peter and his son Andrew farm an area over 2,000ha via a range of contract-farmed, owned and tenanted land, growing a range of niche crops on the family farm where they also specialise in individual buy-back contracts with UK growers.

All crops grown on contract are transported to Fairking for cleaning, before transportation to a Dutch firm based in Humberside, where the oil extraction process takes place.

Mr Fairs warns growers that growing niche crops are not for the faint-hearted and that the firm carefully matches production to market demand.

“If growers do not give the extra care and attention that niche crops require, yields will inevitably fall. At the end of the day, we want our growers to do well,” he says.

This is why the company works closely with its growers and agronomist Neal Boughton, who helped support the UK’s niche crop development, creating good working relationships to produce successful crops.