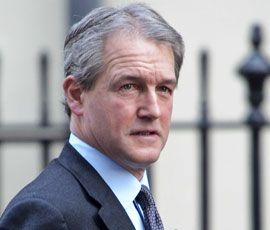 DEFRA secretary Owen Paterson is to call for a new debate on GM crops to ensure the UK is not “left behind” in agricultural science.

Mr Paterson will use a speech next week to call for a new discussion on GMs within Europe to get the views of scientists, farming leaders and the general public on the subject.

Last week universities and the science minister used a speech at the Cheltenham Science Festival to urge the EU to relax restrictions to allow farmers to grow GM crops commercially in this country.

The government’s intention to push GMs up the political agenda comes as Farmers Weekly published a GM survey this week which found 61% of UK farmers would grow GM crops if they were legal.

Following a disastrous 12 months of poor weather, which has seen crop yields plummet by around 30%, one-third of respondents said they would be more likely to grow GM crops now than a year ago. However, one-third said they would not grow GMs “under any circumstances”.

“Mr Paterson wants to start a conversation about GMs. He wants to talk to the public to find out about anything that is hindering them (agricultural firms) about starting GM research,” said a government source.

“He wants to speak to the public about the moral, ethical, environmental and financial benefits there could be.

“He feels we could be just turning our heads away from what’s happening. GMs are being planted elsewhere in the world and other people are benefiting from it.”

Speaking at the Arable Conference at Cereals, farm minister David Heath said GMs were not the “be all and end all” but they could have an important role to play in the government’s agri-tech strategy.

“A large part of the world has been using GMs for a long time and from what I can see, Americans are not dead,” he added.

“When we analyse the past 20 years, yields seem to have plateaued,” he said. “We need another green revolution, and I’m convinced that biotechnology can help deliver some of that revolution.”

However, opponents of GMs claim they are unsafe, could harm the environment and pose health risks when consumed. They are also concerned that patents on important GMs crop would give too much power to a handful of biotech companies.

A DEFRA spokesperson said: “The world’s population is set to hit nine billion by 2050, and to meet the challenge we must increase food production, minimise waste and boost competition. We must not ignore technologies, including GM, that can meet the challenge, particularly when they could also bring environmental and economic benefits to the UK as well as internationally.”