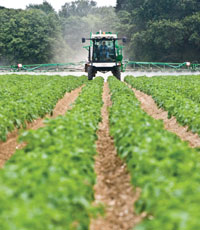 After more than six months of discussions, debate and concerted lobbying the revision of the EU pesticide approvals legislation is drawing to a close. Mike Abram, with help from industry experts, assesses the potential impacts on each crop

Weed control will be hit hardest by the potential ban on certain active ingredients once they are reviewed under the new pesticides approvals directive. Pendimethalin, in particular, is an important part of many resistance strategies against blackgrass, providing residual activity with some post-emergence activity.

Alternative options are available pre-emergence, but there will be dangerously few. The reduction in different modes of action will increase the risk of resistance developing to the remaining actives.

Potentially, wheat production could be cut by 7-10% because of extra grassweed competition, although it could be higher for growers with significant blackgrass problems.

It will mean careful planning of cultural and herbicide regimes will be required to minimise the risk of resistance developing, probably including greater use of ploughing, stale seed-beds and delayed drilling.

The loss of some key triazole fungicides will have a slight effect on foliar disease control levels in wheat. There is a possibility that yellow rust might become more difficult to control, as the at-risk lists a number of strong triazoles on that disease.

But although preferred products for yellow rust and septoria, such as epoxiconazole, might be lost, a number of alternative azoles appear to escape a ban, although this is still a grey area and depends on how one hazard, endocrine disruption, is finally defined.

Sufficient alternatives should be available for the control of the most important insect pests.

The directive should have only a small impact on oilseed rape. The fungicides that are lost can be replaced using other existing active ingredients, although higher rates might be required of weaker products to maintain similar levels of control.

No key herbicides look like being lost, while, as with wheat, there are enough alternative insecticides left to maintain adequate levels of pest control.

Undoubtedly the impacts on pulse production are much less than when most insecticides looked like they could be under threat. As it stands only bifenthrin and possibly deltamethrin of the pyrethroids look like being lost.

That still leaves a reasonable number of alternative pyrethroids, plus pirimicarb and a neonicotinoid product (Biscaya) to control key pests, such as pea aphid, pea and bean weevil, pea moth and pea midge.

But, and it is a big but, weed control will be become very difficult. Already challenging after the removal of several key herbicides, the loss of pendimethalin around 2013 will be a huge blow for growers.

It is a widely used addition to pre-emergence herbicides that widens the spectrum of weeds that can be controlled. While other herbicides will remain available, a lower level of control will be achieved, particularly of polygonum species, such as black bindweed and knotweed.

Its loss will increase the risk of yield loss. Contamination of pulse products from, for example, potato and black nightshade berries, also remains a big concern.

Mechanical weed control is an option, but has proved unreliable in trials, particularly in wet conditions.

Fungicides are not widely used in peas, but in wet seasons leaf and pod spot and sclerotinia can be damaging and only Amistar, Switch and chlorothalonil will be left for use in peas. In beans strobilurins can be used against chocolate spot and bean rust, but, again, the loss of possibly all the triazoles will increase the risk of resistance developing.

The horticultural sector has already suffered some key herbicide losses because they were withdrawn early or failed Annex 1 in the current 91/414 review. Replacements for products, such as Dosaflo (metoxuron) for carrots, Treflan (trifluralin) for brassicas, and Ramrod (propachlor) for lettuce, onions and brassicas have not been found. And there could be further herbicides removed before the current directive is replaced.

As in other crops the potential loss of pendimethalin will have the greatest impact. It is authorised for use on 62 horticultural crops and is essential for onions, carrots, peas and strawberries. It is also one of the few herbicides effective on knotgrass and black bindweed, and there will be no replacement that controls these weeds in the foreseeable future.

The potential loss of linuron and metribuzin will be devastating for carrots and parsnips – where there will be no broad-spectrum herbicides, and so will the loss of ioxynil for onions. These uncompetitive crops can soon be swamped by weeds. Brassicas will rely on metazachlor and a few other products for specific weeds.

The fungicide mancozeb has 33 approvals for use in horticultural crops, including in onions and lettuce for downy mildew control. It is widely seen as vital to prevent resistance developing in other fungicides.

Another fungicide, myclobutanil, is widely used in strawberries, blackcurrants and apples for powdery mildew control, and in roses, for black spot, and ornamentals. Tebuconazole is also used in many crops, including controlling alternaria in carrots and brassicas.

Prothioconazole might remain to fill some of the gaps left. It is authorised for several diseases in cabbages, plus leek rust.

The insecticides deltamethrin and bifenthrin may not be approved. Both are widely used in brassicas for aphids, while bifenthrin also controls caterpillars and whitefly. But there are alternatives that should still be available for these pests.

Thee main effect on sugar beet will be the loss of most of the effective triazole fungicides in use. Beet will also lose quinoxyfen, which gives good control of powdery mildew.

The result will be greater pressure on the strobilurin fungicides and the remaining triazoles to control the full range of diseases – powdery mildew, rust, ramularia and cercospora. The latter has been seen in the UK and is expected to spread in future hot summers.

Field storage of beet means that the level of disease control required in modern beet growing is higher than in the past. Diseased foliage, especially where rust in present, appears to be more frost-prone than healthy foliage. Field storage not only maximises the beet growing season, it also offers energy use efficiencies.

The loss of glufosinate-ammonium will further restrict the options for control of emerged weeds before beet emergence, meaning that for this growers will be almost entirely reliant on glyphosate. Some studies have tepraloxydim on the list of at-risk substances. It is important for control of blackgrass in sugar beet where growers are using rotations to provide a resistance prevention strategy. Its loss will mean that less efficient herbicides have to be used, resulting, at times, in inefficient control.

The biggest challenge will be blight control. The potential loss of mancozeb, which comes up for renewal in 2015, could hurt. Forty years without a resistance problem means it’s widely accepted as the mainstay anti-resistance product and there is a mancozeb component in more than 10 products on the market.

These products will all have to re-formulated without mancozeb and we’ll need to rethink anti-resistance. This won’t be straightforward, as the Water Framework Directive (WFD) could preclude some obvious choices.

Weed control after 2013 will present a real challenge, as linuron, pendimethalin and metribuzin are due to be reviewed. The first two are definitely at risk from the new legislation, while metribuzin has also been included in some lists.

The industry could survive with some complicated mixtures of other herbicides, but this will cost an extra £20/ha and we’ll need to look again at in-crop cultivation. There is also a question mark over varietal susceptibility to alternative herbicides that will need to be resolved over the next five years.

Previous fears over the future of PCN, aphid and slug control have been allayed to some extent with a concession in favour of a more pragmatic, risk-based approach combined with better use of buffer zones. 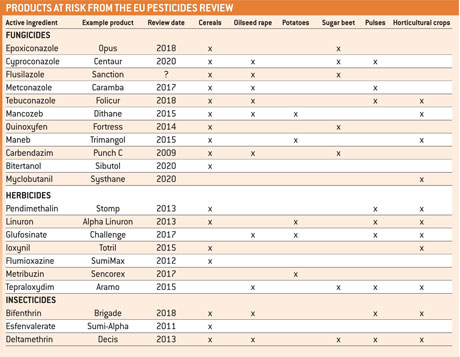 Another threat for pesticides – and one that might have an even greater impact – is the Water Framework Directive. Under this directive, which aims to protect water quality, actives that are used at high rates or ones at risk from exceeding environmental quality standards could be at risk. That might include many key herbicides, especially those used in oilseed rape, slug pellets, some insecticides and fungicides.