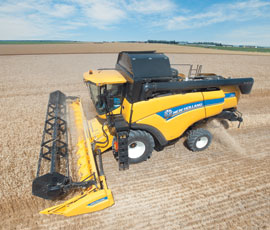 “The first couple of loads went for milling but then we have some very heavy rain and after that it was all substandard.”

Tybalt spring wheat was much better, yielding 7.4t/ha and passing for milling use, added Mr Alderslade.

“Conqueror did alright, and Diego and Grafton weren’t too bad – but it was very variable; the wet areas of the fields had much lower bushel weights than the drier parts. It probably all averaged about 7.4t/ha.”

Oilseed rape looked to be a fantastic crop, until it was decimated by a hailstorm, he said. “It wasn’t an absolute disaster, so goodness knows what it would have yielded without the hail.

“One neighbour two fields away wasn’t touched, while another lost almost every bit of rapeseed.”

Ground conditions had improved a lot over the past week, but there was still a lot left to cut in the area, said Mr Alderslade.

“We bought one trailer with wider tyres, and hired another, so that we could travel, and we were the first to call up to return the hired one.

“It’s been a nightmare harvest, and we haven’t drilled any oilseed rape yet – that will be a job for this week.”