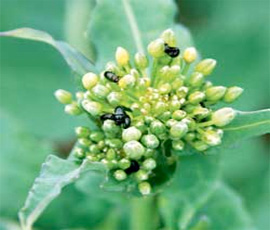 An explosion in pollen beetle numbers in oilseed rape coupled with crops being less advanced after the hard winter has increased the risk of the pest reducing yields this season.

“Temperatures have already been hitting the high teens in parts of the south and pollen beetles have been coming out in force in the early life of the crop,” he noted.

Pollen beetles start to fly into the crop when temperatures reach 15C to feed on pollen and lay eggs.

“It’s a big worry because normally we don’t see many pollen beetles in the crop until we are getting close to yellow bud.”

“There are quite a few pollen beetles in the developing leaf axial where the next lot of buds are coming from – it’s not just in the main raceme at the top,” he said.

“Crops are growing rapidly at present and many are at the green almost yellow bud stage. In some crops, there are as many as 30-40 beetles per plant.”

“This is potentially serious because it can cause crop damage. Therefore, growers need to monitor pollen beetle numbers and apply an appropriate spray, but only if the threshold is reached.”

The ADAS recommended spraying threshold is 15 pollen beetles per plant and five in very backward winter oilseed rape crops, across the field between green and yellow bud stage.

Crops are only susceptible to pollen beetle damage while they are in green to yellow bud stage, Dr Ellis added. “Once they are in flower, they’re no longer at risk.”

According to the Insecticide Resistance Action Committee‘s latest figures, just 37% of samples collected in 2010 were susceptible to pyrethroids, compared with 54% in 2009 and 85% in 2008.

Instead, they should consider products with different modes of action, like neonicotinoids, indoxacarb or pymetrozine as alternatives to pyrethroids since control with the latter may no longer be effective, he says.

However, Dr Ellis stressed that neonicotinoid or indoxacarb-based products can only be sprayed once in a season.