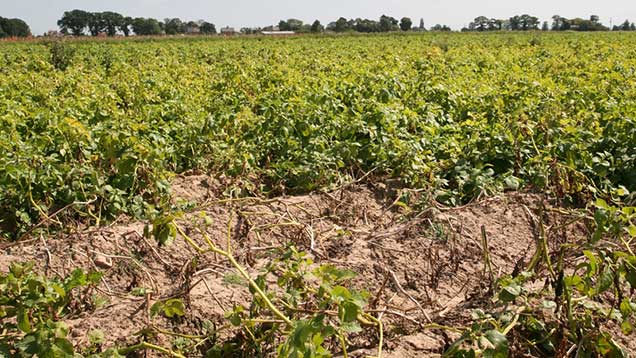 Potato growers are being urged to be alert against an increasing late blight threat in their crops as conditions turn to favour the moisture-loving disease.

Predominantly dry weather has kept a lid on the devastating disease so far this season, allowing growers to keep their crops blight-free.

However, recent heavy rain across the UK has provided the moisture to create an ideal climate for its development, with some areas currently experiencing full Smith warning periods.

See also: How to build a successful potato blight strategy

A Smith period represents a period of at least two consecutive days where the minimum temperature is 10C or above and on each day there is at least 11 hours when relative humidity is greater than 90%.

The AHDB Fight Against Blight tool reported confirmed cases of the disease in a mixture of crops and out-grade piles over the past eight days (up to 28 July), with three across Moray and Aberdeenshire in Scotland, one in Yorkshire and one in Ceredigion, west Wales.

Yorkshire-based potato agronomist John Sarup told Farmers Weekly that many in his area have started cereal harvest, so it was a busy time when growers could take their eye off their potato crops.

“We’ve had some ‘blighty’ weather, so vigilance is the watch word.

He said mixtures of actives with protectant and curative or “kick-back” activity should be selected to keep the disease at bay and eliminate any latent infection in the crop.

He said that growers had coped with blight so far by keeping up with strict spray schedules, but warned against complacency.

“Stick with good products, such as Ranman [cyazofamid] or Revus [mandipropamid], along with cymoxanil and keep intervals tight [seven days],” he said.

“If the pressure gets worse, then you could switch to Infinito [fluopicolide + propamocarb],” added Mr Steven.

Where intervals slip to 10 days, he recommended a treatment of Ranman and cymoxanil, with a treatment of Infinito four days later to get things back on track.