The risk of late blight could be high this season following the exceptionally mild winter, which has helped the pathogen survive on volunteers and discard piles.

This has given the pathogen, which is already around at low levels, a head start, warns researcher David Cooke, at the James Hutton Institute. 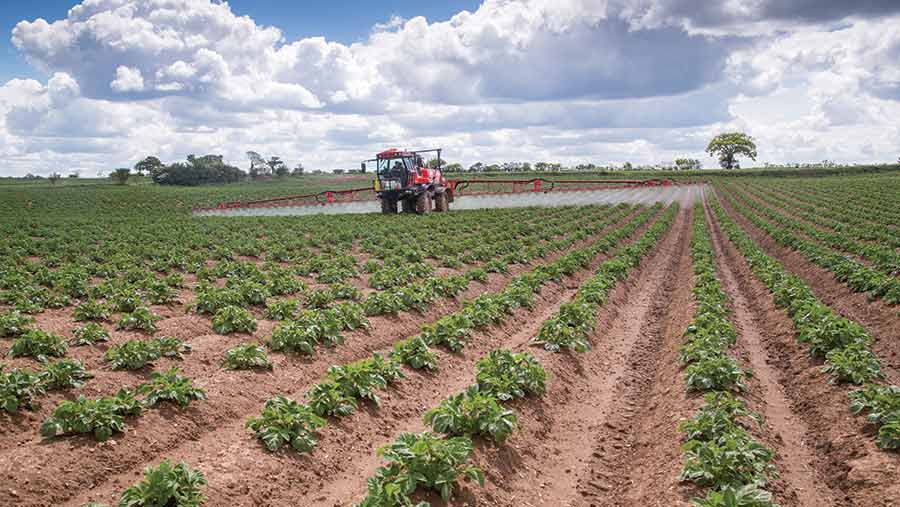 With planting getting under way, growers must tackle these sources, otherwise it is the equivalent of reducing the rotation to zero, he says.

And considering a single potato lesion can produce tens of thousands of sporangia, even low numbers of volunteers and potatoes growing on outgrade piles can be a problem.

It is these sources of inoculum from the end of last season that will be responsible for initiating infection in the 2016 crops. 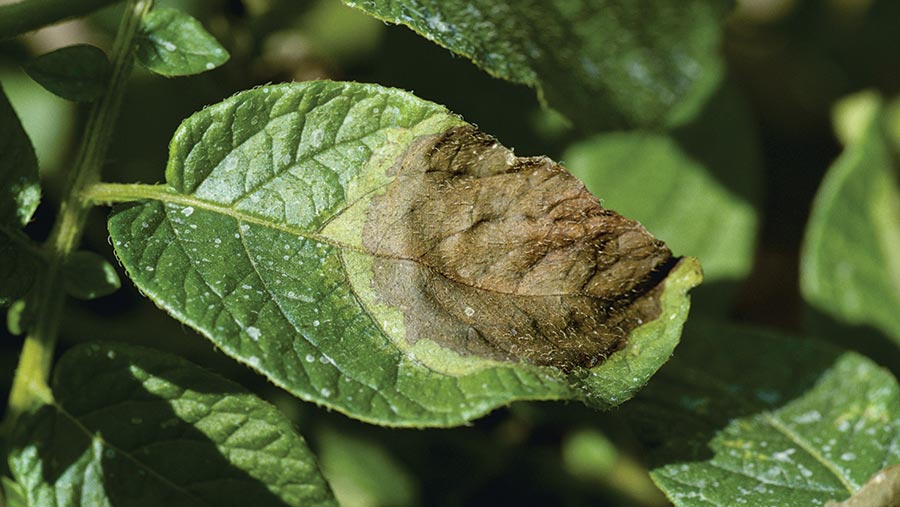 While the risk last year was relatively low with later blight outbreaks, in England and Wales the population was still dominated by 6_A1 and 13_A2, the two aggressive genotypes that have been reported to produce bigger lesions and infect at lower temperatures.

But in Scotland, 13_A2 has almost gone and there is a higher incidence of novel types of blight. These result from the mating of A1 and A2 strains to produce oospores, which survive in the soil and go on to produce genetically diverse types of blight, says Mr Cooke.

“But these novel types are ephemeral [short-lived] and we do not see these genotypes spreading elsewhere, suggesting they are not as aggressive as the clonal lineages,” he says.

With 6_A1 and 13_A2 dominating populations, growers will need to continue to be alert to both the start of an infection and the interval between sprays.

“Under optimal conditions for the pathogen a weekly programme won’t cut the mustard,” he says.

Norfolk-based independent potato specialist Andy Alexander isn’t prepared to take any risks when it comes to timing his blight programme.

“I start pre-rosette because I know how fast and devastating early late blight can be and most of my farms are irrigated so we have created a natural high-humidity area.”

While he keeps an eye on Smith periods, it’s not a deciding factor. “If you are running a programme based on Smith periods, by the time you know about it it’s too late. It’s a support guide, not a definitive line to operate with.”

Control of blight is all about protection, not curative, he says, and the key factors are interval and understanding where to put the right products.

All of Mr Alexander’s programmes are based on seven days unless the blight pressure is very high, and then the interval will be reduced, he says.

Although there is a big choice of chemistry available, there isn’t much curative, bar cymoxamil, he says.

Mancozeb is a key product for both early and late blight and is a backbone product for Mr Alexander, with other actives added in as the season progresses.

A typical programme will start with Curzate and fluazinam, towards full canopy he brings in Infinito and at stable canopy, he alternates Ranman and Revus with a Curzate in there as well. Towards senescence, fluazinam is brought back in to help on tuber blight.

Mr Alexander’s belt and braces approach ensures that as much risk is eliminated as possible, and he believes that any grower looking to trim costs is stepping on dangerous territory.

Nottinghamshire-based Howard Hinds of Root Crop agronomy agrees that making cuts in high-risk situations is not sensible, although in a lower risk season, like last year, growers could have reduced their costs by using different chemistry and stretching intervals.

But in order to do this, growers and agronomists need to have a firm handle on the risk they are faced with.

Mr Hinds uses Dacom, a computer-based model that assesses the risk as the season progresses by utilising local weather data, crop growth stage and the longevity of activity of the blight products applied. Importantly the system also integrates forward risk using the nearest forecast station, so protectants can be applied in good time.

Mr Hinds believes that Dacom is better suited to the more modern strains of blight as it works below 10C and is adapted to the quicker turnaround in the lifecycle.

“We don’t have a blueprint from season to season. In low-risk periods, we use the cymoxanil and mancozeb products. In high-risk, we use more the stronger products like Infinito and Ranman and Revus and adding two products together in high risk.”

Spray timings will be crucial to keep Shrubhill Farms’ 150ha of irrigated potatoes destined for processing free from blight this season.

And farm manager Paul Addison won’t be relying on the risk from Smith periods to indicate when to start his programme. Instead, he will adopt a preventative approach based on crop growth stage and keep intervals as tight as required.

Spraying will commence at rosette stage, and although Mr Addison believes that it would be better to work with a threshold to determine when to spray, he doesn’t put much faith in the Smith period as a tool to schedule blight sprays.

A few years ago, you could almost wait for a Smith period and then go, but we can’t rely on them anymore because the more aggressive strains of blight can get in without a Smith period Farm manager, Paul Addison

Instead, Mr Addison uses Smith as a guide for when conditions are conducive for blight to aid his decisions on spray interval, which is critical as his crops are irrigated.

“If the situation gets close to a Smith period or we get the feeling there is a risk then we’ll reduce the interval down to five days and we have been down as low as three.

Despite there being a number of blight products available, they have little or no curative activity, so we have to think of everything as a protectant, he says.

His choice of early chemistry will consist of Shirlan, not just to control blight but to build a barrier on the soil to prevent spores reaching the underground parts of the potato. Mancozeb and Curzate, despite being superseded by the newer chemistry, will be included to aid early blight control and to slot in between modern chemistry if intervals are reduced.

Mr Addison believes that using the best products is insurance against blight, and worth the cost. His main products are Infinito, Revus and Valbon, with Ranman and Shirlan used again towards the end of the season against tuber blight.

The number of sprays applied in the season varies with risk, but Mr Addison can apply up to 25 blight sprays in a season, with 18 being the minimum.

“We irrigate, so we can’t rest on our laurels even in a dry summer.”

Despite a later and lower risk of blight last year, Mr Addison’s spend was between £290-300/ha with, many fields receiving fewer than 20 applications.