Growing potatoes has its challenges, and three years ago, one Suffolk grower was seeking solutions to problems such as potato cyst nematodes (PCN) and controlling weeds without linuron, as well as trying to improve his nitrogen fertiliser and irrigation strategy.

In 2016 Elveden Farms became the second host farm for AHDB Potatoes, and for farms director Andrew Francis, there was an immediate temptation to try to fill the knowledge gaps quickly.

However, he had to accept that some fundamental science was needed before he could make step changes. “We operate in a high-risk sector,” he points out.

“The financial impact of making a wrong decision means that we can be overly cautious. This initiative has allowed us to make changes in a controlled way and test out new thinking – it’s been like having a safety net.”

There are plans for learnings on irrigation, nitrogen and PCN control will be put into practice, he reveals. 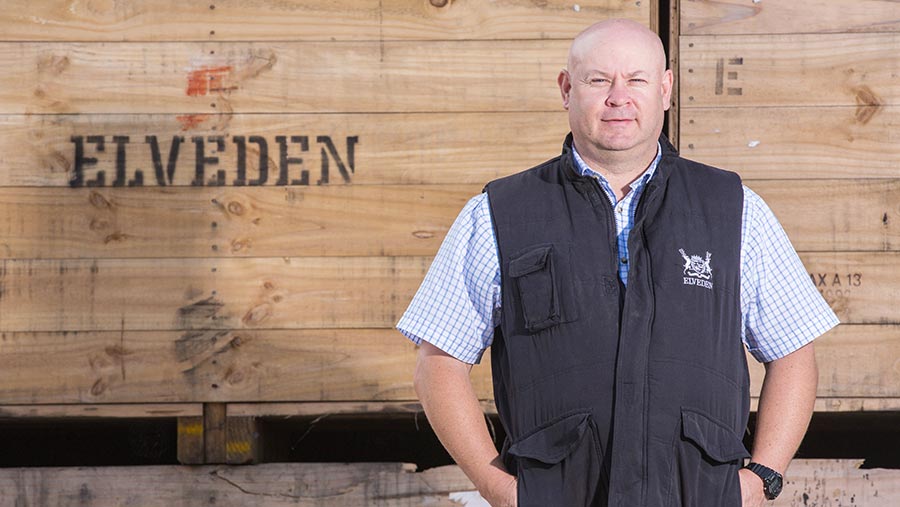 “In 2019, we will be front loading our nitrogen more, as we’ve now got evidence that it isn’t leaching on our light sandy soils. We will also have more confidence about scheduling irrigation restarts.”

Rotation planning around PCN remains complex, but guidance on the tolerance of new varieties is helpful, he adds.

Bolder decision-making will be the result of his three year tenure as the AHDB Strategic Potato Farm East.

“It’s the right time to take bigger leaps as the team has upskilled. In addition to the successes, we’ve also learnt from the failures of the last three years.”

Herbicide work initially focused on residuals and the loss of linuron, before being widened to look at the susceptibility of newer varieties to different herbicide programmes.

It confirmed that options to replace linuron do exist, says independent agronomist Graham Tomalin of VCS Potatoes, but all come at a higher cost – often double that of previous treatments.

As a result, knowledge of the weed spectrum present proved essential for cost-effective control, so that actives could be targeted.

“We identified that metobromuron could fill the gap left by linuron’s departure, so investigated it in various combinations,” he says.

“We also took the opportunity to assess aclonifen, a new residual active ingredient, which may get approval for 2020.”

Aclonifen looks to be a useful addition when used in combination with other actives, bringing control of fat hen, mayweed, spring nettle, runch and charlock as well as grassweeds including blackgrass and annual meadow grass.

“It has to be applied pre-emergence of the weeds and in mixtures,” he stresses. “No phytotoxicity was observed in 2017 and 2018, across a total of three sites.”

Metribuzin was the most cost-effective active for many weeds, although growers must heed soil type restrictions and varietal susceptibilities.

A key finding from the farm trials was that there was no evidence that much nitrogen leached out of the rooting profile during the growth period on heavily irrigated sandy soils.

Researcher Marc Allison from Niab Cuf reveals that work measuring the movement of nitrogen when standard irrigation and over-watering practices were implemented showed that water moving out of the soil profile contained very small amounts of nitrogen – well below the legal limits.

“By the time the water has moved, the nitrogen has been stripped out by the growing crop,” he reports. “It’s good news; loss of water doesn’t mean loss of nitrate.”

Other results from three years showed that potato yields are not directly related to how much fertiliser is applied. 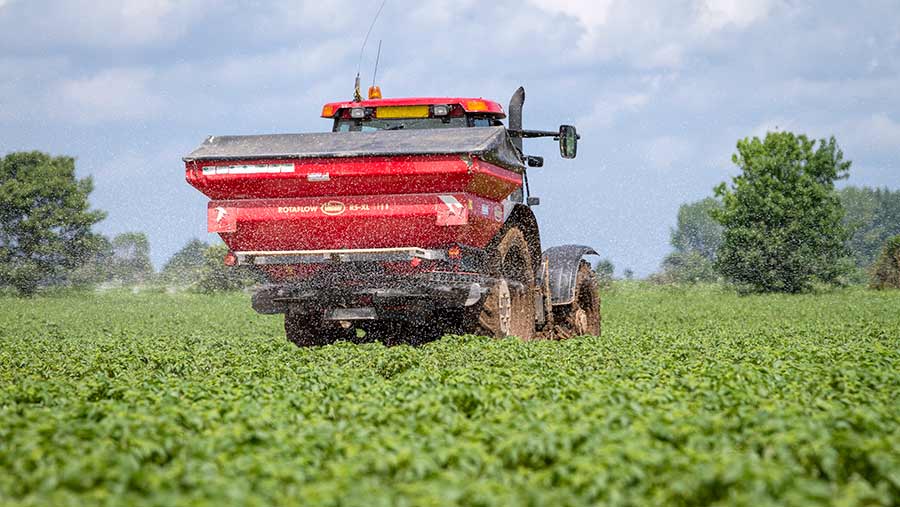 “With nitrogen, it’s not how much that is applied, it’s how much we get into the crop,” he explains. “As more nitrogen is applied, it doesn’t necessarily all go into the tubers – a proportion is in the canopy.”

Factors affecting the amount of nitrogen taken up by the crop are numerous, with compaction having a huge effect, he warns.

“There was no benefit to the crop at all from putting it underground or using protected nitrogen. Uptake rates can be very rapid, so our advice is don’t do anything that can slow these up.”

Trap cropping, new nematicides and varietal resistance/tolerance were the focus of work on potato cyst nematode work done at Elveden.

The trap crop demonstration compared three different solanum-based crops – sticky nightshade, huckleberry and Azo, all of which showed a useful decline in populations on a very split site with variable PCN numbers.

“There were difficulties with their establishment, emphasising the need to use herbicides,” says Mr Tomalin. “More work is needed on their performance, especially on different soil types.”

“We couldn’t pick them apart in terms of ground cover and all gave a yield improvement. Nemathorin had the slight edge in terms of yield and restricting multiplication, albeit across only two replicates.” 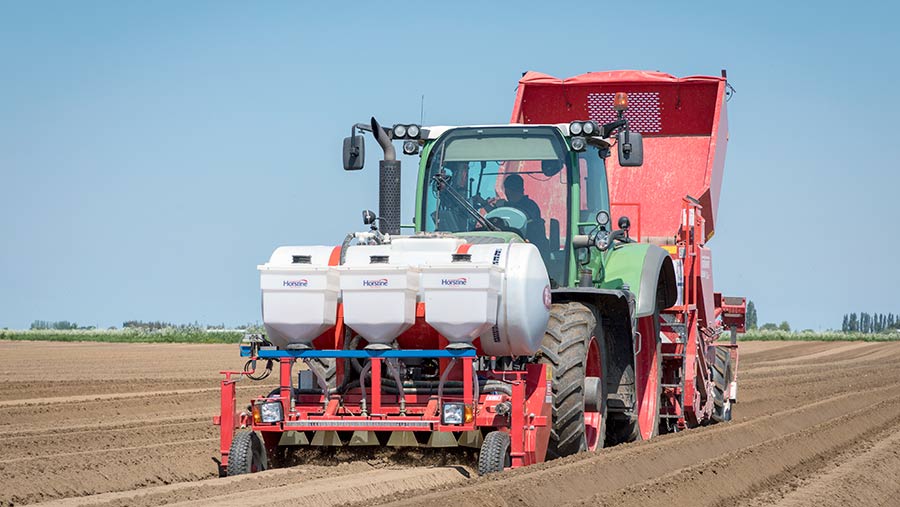 A tolerance and resistance trial comparing 12 varieties within a mixed Globodera pallida and G rostochiensis site looked at new varieties, both with and without nematicide treatment.

Resistance is the ability of a variety to affect the multiplication of PCN, while tolerance allows it to produce a reasonable yield when grown in the presence of PCN, Mr Tomalin explains.

“Knowing what species you are dealing with is important, as varieties can be resistant to one and not the other, or resistant to both. A resistant variety results in a bigger reduction in multiplication than a nematicide.”

Tolerance without resistance will have no effect on multiplication, so future yields will be reduced, he warns.

“Of course, the risk of G rostochiensis increases where there’s only pallida resistance, as is the case with Elland.”

An impending EU decision on the future use of sprout suppressant CIPC (chlorpropham) means there’s a strong chance it will be lost, while changes to the maleic hydrazide label will restrict its future use in certain markets.

“It’s a dynamic situation,” he reports. “Given the potential impact on the industry, we are looking at alternatives, carrying out dormancy testing on 30 varieties and doing CIPC residue assessments in preparation for a transitional maximum residue limit (MRL).”

As no decision was made by 25 January, it has now entered the appeals process, he reveals.

“There is an existing alternative, maleic hydrazide, but the new formulation can’t be used on crops going for stockfeed. There should be enough stock of the old formulation for 2019, so from 2020 treated crops will need a non-livestock destination.” 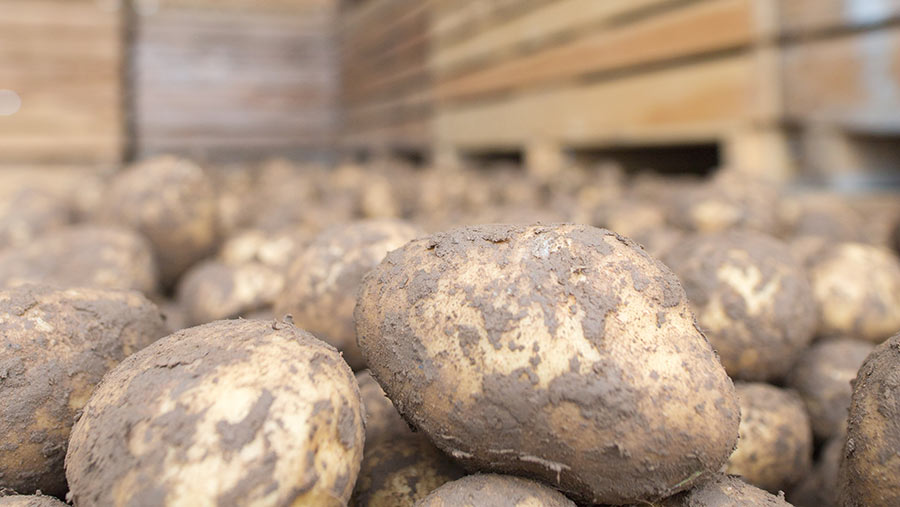 Other existing alternatives include ethylene and spearmint oil, while dimethylnaphthalene and orange oil are awaiting UK approval.

A third option, the biochemical 3-decen-2-one, is awaiting Annex 1 listing by the European Chemicals Agency.

“We’ll be working with all of these and looking at combinations of products, in crops for both processing and fresh markets,” Mr Cunnington confirms. “To date, the dimethylnaphthalene results look encouraging.”

Otherwise, dormancy testing on 30 varieties will help growers to exploit those with the asset of natural dormancy, while CIPC residue assessments from pre-treated stores will help to provide data for a transitional MRL, if required.

That’s because the chemical can be detected in the fabric of the store 10-15 years after application.

“The message for growers is to concentrate on best practice,” he urges.

“The new products are not as good as CIPC, so being better with store control and management will be important.”