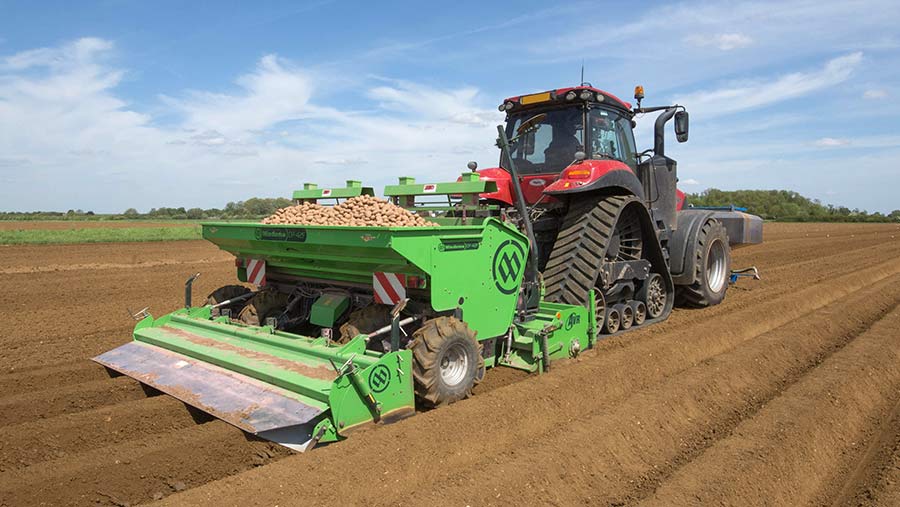 Britain’s planted potato area in 2019 rose by 1% as a result of smaller-scale growers increasing their area – a decision likely driven by higher prices in 2018.

Although the current 118,950ha area of potatoes shows a slight increase year-on-year, this is still one of the lowest on record, says a report by the AHDB.

Most sectors have seen growth in area, with potatoes destined for the retail market being the largest at 44,500ha, increasing by 1,600ha this year, due to higher proportions grown on contract for pre-pack markets.

Potatoes intended for the processing sector fell by 1% compared with last year, to 36,100ha, driven mostly by a reduced demand for potatoes in the crisping sector.

The area planted with potatoes for the fresh chipping market has been following a downwards trend since 2010, but this year saw a 3% rise to 13,400ha.

The top 10 most widely grown varieties account for more than 40% of the overall potato area. The top three varieties – Maris Piper, Markies and Maris Peer – have held their current positions.

Maris Piper has reversed its downward trend, growing by 6.5% from 2018 plantings, with a shift towards contracts rather than growing for the open market.

In contrast, Maris Peer has fallen year-on year, bringing the area planted to its lowest since 2010. This is down to a reduction in demand for salad potatoes and newer varieties Jazzy and Jelly both seeing a 20% area increase in planted area.

Lady Rosetta fell by 21.5% on last year and slipped to number 10, overtaken by Taurus as the most widely grown crisping variety, due to its resistance to potato cyst nematode and its ability to store well.