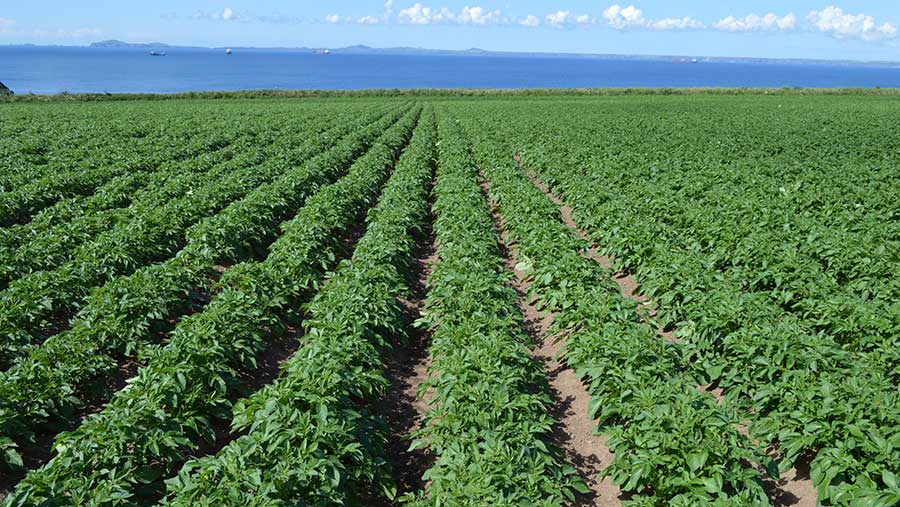 Pembrokeshire potato growers are looking to focus their early spud crops on the local Welsh market and also expand into chipping and baking markets to drive customer demand.

Competition from early growers in England and the ability to store “baby” potatoes over the winter has hit the Pembroke growers and they are having to work hard to market their crops.

One big grower says cold storage has largely killed the early trade, as Maris Peers from East Anglia can be stored and sold as baby potatoes in the spring, while Suffolk farmers growing under fleece can lift from mid-June, squeezing the Pembrokeshire early season.

Major packer Puffin Produce in Haverfordwest is fighting back, tapping into the Welsh supermarkets to highlight local sourcing, while some growers are spreading the season to lift from June until September.

Grower numbers in this south-western tip of Wales have dwindled to just over 20, but now they are growing for a range of outlets, from the traditional very early, “loose-skinned” market, through to salad potatoes, chippers and bakers. 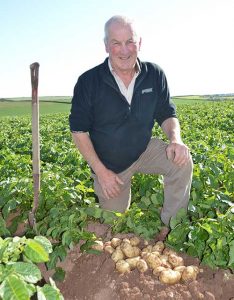 Stephen Ford has moved to focus on the early chipping market to catch the chip shop trade before larger potato growers from areas such as Shropshire start flooding the market.

“We can pick potatoes one day, they are gone the next, and in the chip shop that evening,” he says.

There is only a handful of growers now growing for the very early loose-skinned market, sold at the farm gate and local stores starting in the first week of June, before they supply Puffin for the supermarket trade.

Puffin has 10 growers supplying this very early market, and the group produces all the early Pembroke potatoes in supermarkets across Wales, excluding the discounters.

Overall, the grower-owned packer has 34 supplier growers, with 27 in Pembrokeshire and some as far as the Wye Valley in England, supplying earlies, salad and baking potatoes.

“This means we can be selling potatoes from June until the end of August,” says Megan Tye, Puffin’s marketing manager.

With the advent of cold storage, many growers have moved towards later production such as providing salad varieties, such as Charlotte, the chip shop market and the early baking trade.

“This mean we can grow until late summer for bigger yields and not be under so much pressure from the early trade which can be hit by a late season,” says another large grower.

Potatoes and lamb work well together

He farms with his wife, Elizabeth, growing potatoes for the early chip-shop trade on his light land farm, which benefits from the mild south-westerly Gulf Stream.

When potato harvest is completed in mid-July, and his potatoes leave to feed the nation’s fish and chip lovers, his sheep flock graze the leftover spuds and green tops (haulm).

This helps to flush the ewes and get them in good condition before they are put to the ram in mid-August, to lamb in January, and so gain from peak fat lamb prices following Easter.

The Ford family came down from Cheshire 22 years ago to grow potatoes on this free-draining, light loam over sandstone soil and found a niche outlet in the 25kg bagged market for the chippy, as Puffin focused on the pre-packed supermarket trade. 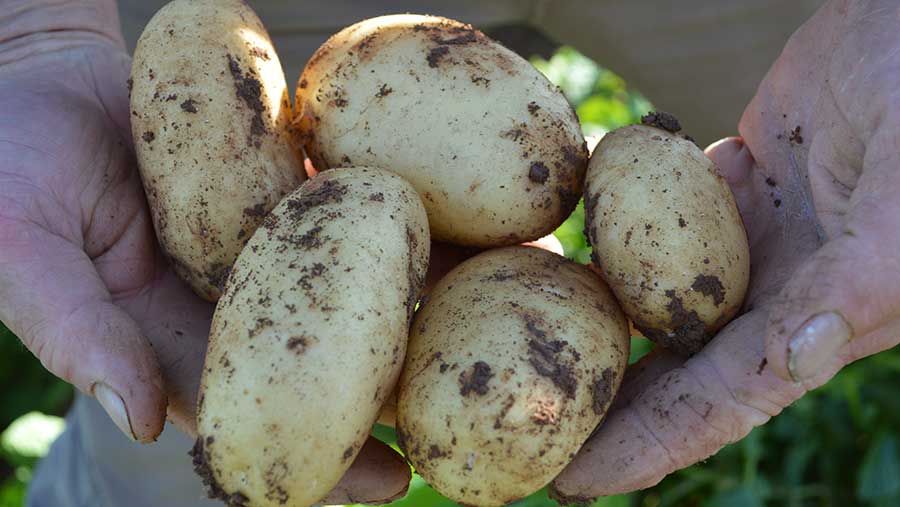 They devised an eight-year rotation – three years grass ley, followed by two years of potatoes and three years of spring barley interspersed with cover crops of ryegrass to give autumn and winter livestock grazing.

“We found the most profitable market for us was the early chipping market and it suited our growing and harvesting system,” says Mr Ford.

The farm aims to harvest between mid-June and mid-July to supply chips shops struggling with dwindling supplies of old-crop, so they welcome new fresh potatoes.

Some three-quarters of the farm’s potato area is planted to the white-fleshed, early-chipping variety Accord, which provides the bulk of the early crop before the slightly later variety Miranda is lifted.

“Accord is friable at a lower dry matter percentage than many others and can fry at 17.5-18% dry matter compared with many others nearer 20%,” Mr Ford adds.

The spuds at the family’s 88ha Winterton Farm, Marloes, some 10 miles south-west of Haverfordwest, are grown for potato wholesaler T Dobsons & Sons, which supplies potatoes and vegetables across the country.

The potato year for the 19ha crop starts with ploughing before Christmas and phosphate and potash fertiliser application, before the ground is rotavated twice in the spring. Seed potatoes are then planted with seed-bed nitrogen-phosphate-potash fertiliser.

Mr Ford aims to plant in the first week of March, as he is not looking for ultra-early lifting, while crop bulking up does not come before mid-June.

A pre-emergence herbicide containing flufenacet + metribuzin (Artist) is used, and two to three blight sprays are usually applied from mid-May onwards, before the spuds are lifted. Early lifting means pests such as potato cyst nematodes are not a big problem.

Mr Ford is one of the few growers who do not destone fields in the area, as he believes the red sandstone in the soil helps it to warm up quickly in the spring. “If you don’t destone, the crops mature a little earlier due the early warmth in the soil,” he says.

There is very little risk of frost on the mild, south-facing farm, but this year, when Storm Hannah raced in from the Atlantic at more than 80mph in late April, Wales became the windiest place in Britain and the salt whipped up from the sea put the potato crop back about a week.

This season, a foliar feed has been applied to help the crop recover from this salty storm, while irrigation is supplied throughout the growing season from the farm’s reservoirs.

Mr Ford estimate he needs 20 picking days to lift his 19ha of spuds, and he aims to be finished by mid-July. The crop is harvested with green tops still attached, to give feed for the sheep, and once the ewes are taken off, the field is levelled and ryegrass sown for stock feed.

In fact, ryegrass is sown after both potato and spring barley crops, so the whole farm is green in September to help preserve nutrients in the soils and give useful stock grazing.

For the second successive potato crop, cattle manure is applied in the late autumn before ploughing, illustrating that livestock are a key element of potato production on the farm.