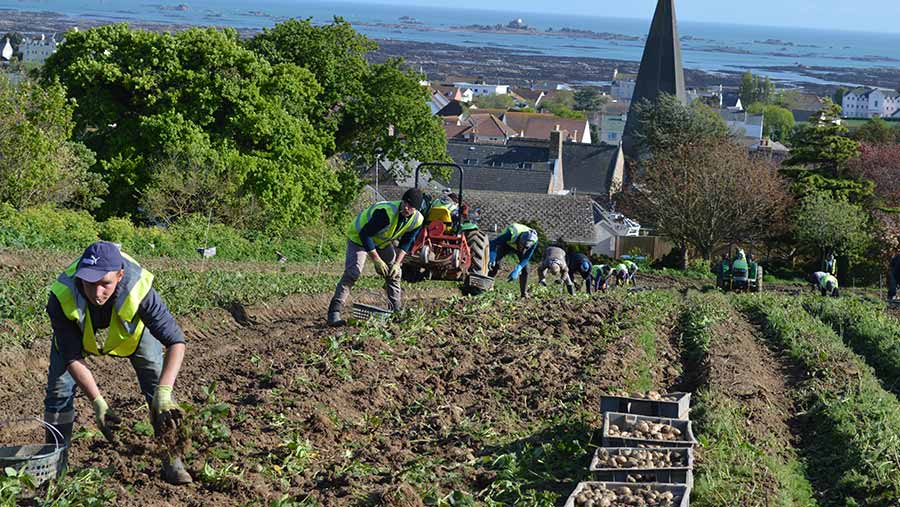 Jersey’s early potato harvest is almost a month late this spring, with yields expected to be down one-fifth after the Beast from the East frosted off young plants barely out of the ground.

Liftings of the earliest crops grown on the steep slopes tumbling down towards the sea are showing low tuber numbers as the Channel Island struggles to meet supermarket demands from the UK mainland.

The searing cold in late February frosted off early growth, forcing the potato industry, which is Jersey’s biggest exporter, to scramble and reschedule deliveries stretching all the way into July.

William Church of the Jersey Royal Company said after a desperately poor start to the season, harvesting is now starting to pick up, while other early spud areas such as Cornwall, Pembrokeshire and Suffolk have all been hit badly by poor weather.

“It’s been a really challenging start to the season, but now going into May we have some excellent-looking crops,” he told Farmers Weekly.

Jersey Royal growers say the season is the worst they have known for at least 40 years – since the practice of covering early potatoes with plastic was first introduced to the island in the 1970s.

Sub-zero temperatures blown in from Siberia made for a testing time, as even double–covered crops with plastic and also fleece suffered as temperatures dipped to -6C.

Hand-lifting on the vertiginous coastal slopes, know as cotils, is now finished, as picking teams move on to more level ground and yields of Jersey Royal new potatoes start to pick up.

These early crops can be grown in 10-12 weeks on Jersey’s light and well-drained soils, and are harvested using a tractor-mounted winch-operated lifter that exposes the tubers for an army of pickers to gather.

The main outdoor spud crop is planted from January through to April, with harvest in a normal season from the end of March through to July, and at peak time the island can export 600-700t/day to the UK mainland.

Mr Church, the group’s director of sales and marketing, believes island production will be down one-fifth to about 24,000t this season compared with as much as 28,000-30,000t in a more normal year.

He is busy rescheduling supermarket deliveries to customers such as Tesco and pushing through big UK retail promotions in June and well into July.

“The supermarkets are being really understanding as we are looking to extend our agreements into July, whereas they usually tail off towards the end of June,” he said.

Normally, Jersey Royal’s big month is May, quickly followed by Cornish earlies hitting the market in June and the Suffolk crop being lifted in July, but this season all those timings look like being a month later.

Mr Church’s group have a sister company in Cornwall and down in the far south-west of England, many crops have also been hit by frost and will be late maturing.

The one bright spot is that prices have held up due to lack of supply from Jersey and the other early areas. Wholesale prices on Jersey Royals were holding at £1.50/lb or £3,300/t in early May amid hopes that prices may not fall too low in the extended season.

Mr Church’s company accounts for about 70% of the island’s 2,500ha of potatoes, growing, harvesting, packing and distributing the crop. Each year it rents land from about 120 landlords. The rest of market is covered by a handful of growers supplying rival potato group Albert Bartlett.

The Jersey Royal Company, which was bought in 2014 by Produce Investments, the owner of fellow potato company Greenvale, usually starts planting spuds in 10ha of glasshouses just before Christmas and this crop starts being lifted at the end of February.

The supply of these indoor crops, priced as high at £5,000/t, was stretched out until the delayed outdoor crops became available in April after being hit by the heavy frost, almost unknown in the mild maritime climate of Jersey.

Mr Church explains that the frosts were well forecast and the group added fleece on top of plastic to protect the delicate young plants, but the double-covering simply was not good enough.

Young green shoots were severely frosted and killed off, and crops took time to compensate and throw up a new set of potato shoots.

“The very first outdoor crops showed yields of only 10% of what was expected and we were digging yields of less than 1t/acre rather than a more normal 6t/acre on the early slopes,” he said.

Harvesting has now moved to flatter fields in May, but hand lifting is still used as these are often small fields where great chunks of granite can cause damage to heavy machinery.

Some growers say early spuds are often lifted before potato cyst nematodes become a real problem, but others are keen to keep the ground as clean as possible of these destructive pests.

As soon as spuds are lifted on the early slopes, mustard seed mixes are sown, which later in the year can be mown and worked into the soils to act as a biofumigant to give some control against these pernicious pests.

On the steep cotils, mustard mixes are not often used, but rather a standard mix including barley, vetch and legumes is grown to help fix nitrogen and act as a green manure to feed next year’s potato crop. 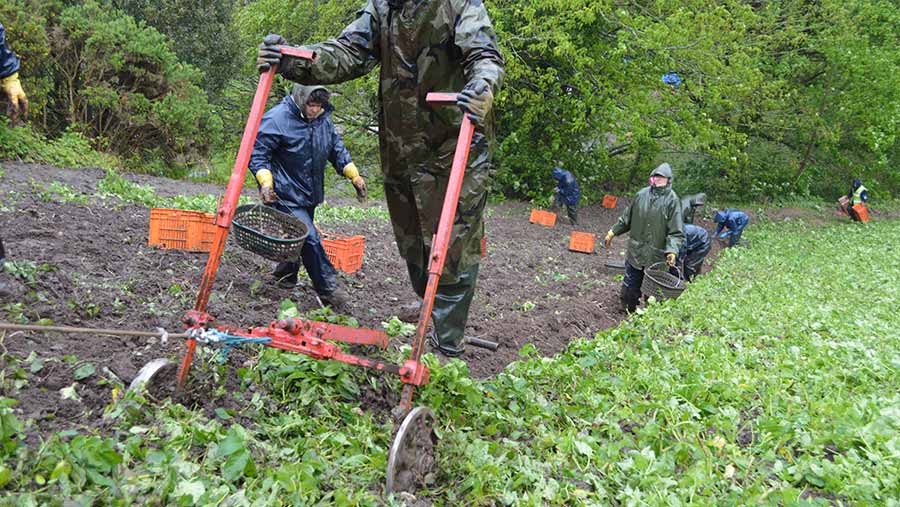 In addition, Solanum sisymbriifolium or “prickly potato” can be planted, which acts as a trap crop as the stem and leaves contain solasodine, which makes the plant very resistant to many pests, including nematodes.

Blight disease can be a problem in the warm, humid weather of the island, with potato fields never very far from the sea. Therefore preventative fungicides are used, while bad blight patches are sprayed off with herbicides.

Another pressing problem is labour, with Mr Church’s group relying on about 420 seasonal workers, largely from Poland, with others from Romania and Portugal also arriving to help lift the spuds and operate the grading and packing lines.

But the fall in the pound after the 2016 Brexit vote, combined with an upturn in the Polish economy, is causing fears about providing future labour needs.