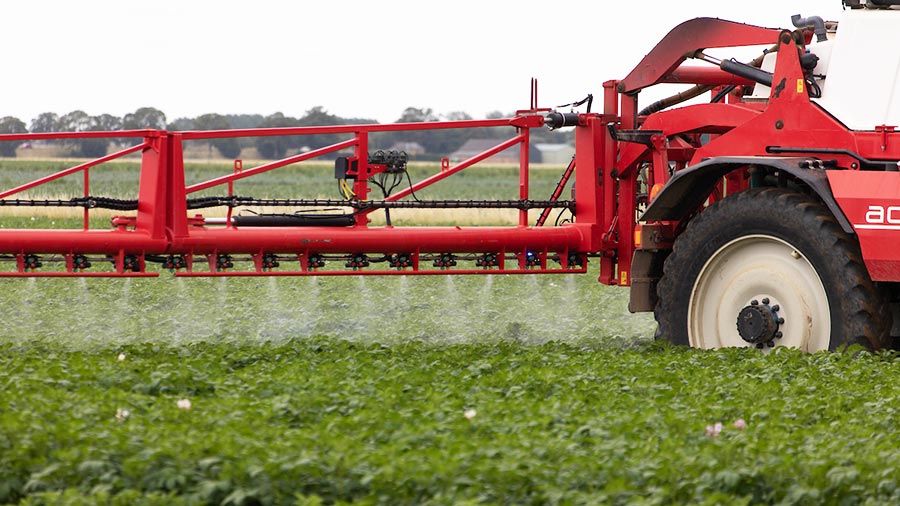 The impending loss of multisite fungicide mancozeb shines a bright spotlight on the potato industry’s over-reliance on fungicides and fragility of blight control as active ingredients are lost.

To meet this challenge and create a more sustainable system, researchers and breeders are working hard to improve on-farm decision making and bring forward resistant varieties suitable for the UK market.

One of the most immediate concerns for industry without mancozeb is the potential to accelerate the selection of fungicide-resistant blight strains.

See also: Mancozeb: Why the potato industry must prepare for its loss

To try to address this threat, a project led by Adas plant pathologist Faye Ritchie – in conjunction with Scotland’s Rural College and the James Hutton Institute – is reviewing historic trials data and hopes to fine tune advice on resistance management strategies for late blight control.

“Losing mancozeb is a dent in the resistance management strategy, as it is multisite and low risk, so has been important in supporting higher-risk single-site actives.

“The industry-collaborative project will look at current resistance management guidelines and try to better understand how to use existing fungicides, particularly whether alternating products or using mixtures is the best strategy.

“A guidance document should be available next year,” says Dr Ritchie.

Anne Stone, knowledge transfer manager at AHDB potatoes, says there is growing interest in late blight resistant varieties across all sectors, with some keen discussion generated by its demonstration at the 2020 Eurofins blight trials.

AHDB established untreated variety plots with a range of foliar blight resistance scores and served to remind growers of the value of plant resistance in managing the disease.

It included varieties like Orchestra with a very susceptible score of 2, up to new varieties such as Muse with a 9 and plots were inoculated with the four main genotype of late blight currently present in the UK.

“The trial showed that the score was very closely related to the occurrence of foliar blight in the field and clear differences were seen between each additional point.

“Some have been saying National List scores are now suspect because of changes in population, so it’s encouraging that in spite of that, the levels of resistance do stand and broadly speaking, you can rely on the scores.”

However, the suspicion around National List scores in light of changing populations does seem to have emerging evidence to back it up, particularly where 36_A2 is concerned.

Alison Lees, potato pathologist at the James Hutton Institute recently led a Scottish Society of Crop Research-funded project that looked at genotype virulence profiles – or their ability to overcome plant resistance – between clones and natural variation between isolates.

Scottish Agronomy’s Eric Anderson says it showed that some individual varieties may be more susceptible to 36_A2 than others pathotypes, including Markies, which is the second most widely grown variety in the UK.

While 36_A2 is known to be more aggressive, this alone does not explain the difference between varieties and could be part of the reason why the strain is becoming more prevalent.

“The market is encouraging us grow the same old varieties, which creates more risk for the grower and leads to a conservative approach where we end up putting heavy fungicide programmes onto crops.

“The chemistry is starting to wane and it’s time we started to have a closer look at resistance mechanisms if we are to improve our IPM strategies with regards to potato blight,” he adds. 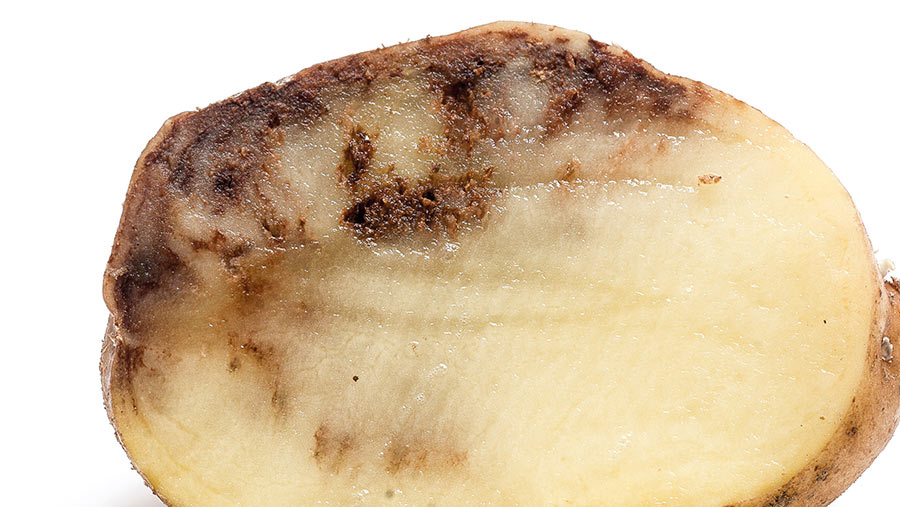 Blight resistant varieties have been available to grower for many years, with the Sarpo range offering some well-known examples, but haven’t provided high yields or taste and quality characteristics for success in the UK market.

However, a number of new late blight-resistant potatoes are now starting to come through from breeders such as Dutch company Agrico, who’s UK subsidiary is situated in between Perth and Forfar.

Agrico’s UK product manager Gavin Towers says that the company has seen blight resistance as a priority in its conventional breeding programme, with seedlings showing high susceptibility to the disease taken out at first selection.

“We realise the need to produce robust and sustainable varieties for the future and also need to take account for potential changes in blight pathotypes, too,” he says.

However, its more robust “new generation” varieties carry multiple resistance genes, and Agrico has several options suitable for a range of markets with 8s or 9s for foliar and tuber blight.

Mr Towers says that under pressure in trials, these varieties can be free of late blight without any fungicide input whatsoever and should be seen as good options for all growers, not just pigeonholed into the organic sector.

“When we demonstrate these varieties, [conventional] growers are really enthusiastic, but it always comes back to the question: where will I be able to sell it?”

Varieties like Alouette are being bought by Waitrose, but much of the market is still dominated by susceptible varieties that require high fungicide input to protect against disease.

The tricky part is encouraging all the supply chain to take advantage of resistant varieties, which can reduce risk for growers, cut costs and reduce the environmental impact of potato production.

In 2017, breeders, growers and retailers in the Netherlands signed the Accelerated transition to robust potato varieties covenant to rapidly introduce late blight-resistant varieties for its organic sector.

This was in response to a ban on copper sulphate use and high levels of late blight in crops during 2016.

While the covenant is not directly transferable to the UK because its organic market is not as large as that of the Netherlands and the rest of Europe, it may provide a blueprint that sees UK supply chain working together to shift to blight resistant potatoes.

“It’s on the cards and we could see something similar here,” adds Mr Towers.

Researchers are looking at improving decision support systems, which are a valuable tool in helping growers better target the remaining fungicides to the blight risk as the season progresses.

The longstanding Smith Period, which has more recently been refined to the Hutton Period, is a proven way of identifying when a crop is at risk of late blight infection, giving a binary output of green (clear) or amber/red (Hutton criteria met/full Hutton).

However, if conditions are close to a Hutton period a crop could still be a risk, particularly if factors such as topography and sheltered areas may just tip localised areas over the threshold criteria. It is this nuance that is missing from the system.

Dr Stone says a second project is also investigating the use of spore traps at two Spot Farms this year to see if they can play a role in refining blight risk prediction and subsequent fungicide strategy.

Work carried out in different diseases in horticultural and other broadacre crops has sometimes shown that infection can occur before traps pick up airborne spores moving into the crop.

It is hoped the work will fine tune the siting of spore traps to avoid this, increasing confidence in results. In the future traps may also be able to detect by genotype, which will be important where clones are more virulent on different varieties.

Dr Stone stressed that neither project aims to replace Hutton Criteria, but build on it to provide a more robust decision support system that ultimately can reduce fungicide input, cut grower costs and better protect the available fungicides for future use.