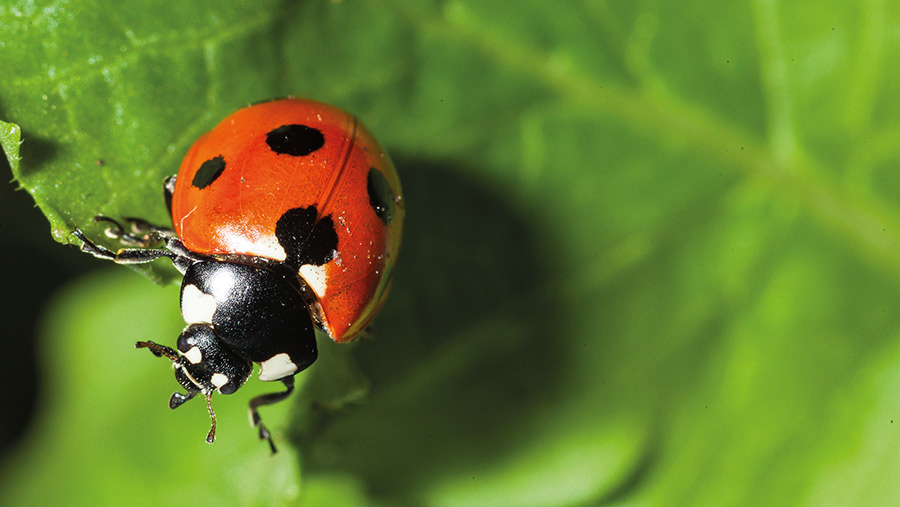 Growing top-quality seed potatoes is a challenge no matter how you farm. But not many would consider growing them without any insecticide, herbicide, fungicide or synthetic fertiliser – yet that’s exactly what Brendon Rockey is doing on the 200ha Rockey Farms, in Center, Colorado.

In part one of this two-part series, he explained what had led him to a biotic farming approach. This week, we delve deeper into the practicalities of controlling aphids and weeds, and managing cover crops in his system.

See also: How a US potato grower is slashing pesticide use

A combination of resistant varieties, flowering strips and companion crops for the potato crop are the key ingredients in Mr Rockey’s formula for controlling potato virus Y (PVY) in his seed potato production.

The concepts he now uses in the field were first tested in his greenhouse mini-tuber production. When he first released ladybirds into the greenhouse, he realised they didn’t remain for very long and contributed little to aphid control.

“It wasn’t until I started planting companion flowering crops in the potato crop that I was able to establish these beneficial insects in the greenhouse,” he says.

Establishing a selection of species that flower at different times creates the habitat and gives a carbohydrate food source for the ladybirds to flourish and reproduce during the season, he explains.

In the field, he similarly uses a diverse mix of flowering species to provide beneficial insects with a food source for as long as possible during the growing season, as well as places to shelter and lay their eggs.

“I plant these next to the potato crop in strips as soon as I have finished planting the potatoes to get an early start so the beneficials can start establishing and reproducing,” he says.

Typically, a strip the equivalent of eight potato rows (about 7m) is established in the middle of a 48ha field, with further similar strips between different seed generations, and buffer strips either side of low-generation seed.

“But by themselves this isn’t enough as the beneficials only move so far from these strips as this would be their only source of resources.”

So to further protect the crop he also plants companion flowering species with the potato crop. “This gives them food sources through the field, and also a place where an aphid has the potential to feed and clean off its stylet and the semi-persistent PVY out of its body.

“I’ve had good results with field and post-harvest inspections for virus using these methods.”

Virus-resistant varieties are also increasingly important. As strains of PVY have changed over the past five years, with very subtle visual symptoms making them harder to rogue, resistant varieties have become the easiest way of ensuring clean seed potato crops, he acknowledges.

If growing potatoes without herbicides was not enough of a challenge, adding in weed control while also establishing a diverse mixture of companion crops adds an extra layer of complexity.

“Working with cultivation rather than herbicides in this context has a lot of advantages,” Mr Rockey says. “It would be very difficult to find a herbicide that is selective to only remove the weeds and not any of the companion species.”

The five-strong companion species mix (see box) is planted via gandy boxes on the front of the planter at the same time and depth as the potato seed. “The depth of the planting was a major factor in selecting the species – I can’t go with too small a seed as it won’t have the energy to come up from that depth.”

After trials, he determined that about 17 kg/ha of seed gave the ideal stand, while keeping the cost low (£11-£13/ha).

The first weed control pass with the cultivator is made about two weeks after planting, when the potato sprouts are about 7.5cm long and still below the surface.

Some of the legume species in the companion crop, however, will have emerged. This was initially a concern as, in addition to the sweeps that go between the furrow, his four-row cultivator has a horizontal rod that goes across the top of the hill.

“The first year I was certain I was going to take out my companion crop, but what happens is when I knock off the tops of the sprouts, they go down to the next node and send up a new shoot.

“This works with my mix because all the legumes are hypogeal, which means they leave the cotyledons in the soil and send up a shoot. If I used an epigeal species, such as a pinto bean, which sends up the cotyledons out of the soil, if it was damaged it would end the growth.”

A second pass without the rod happens a couple of weeks later once the potato crop has emerged and the companion crop recovered.

The final pass, typically after a further two weeks, takes place just before the potatoes close the rows.

While cultivation does physically disturb the soil, which goes against what some are trying to achieve with regenerative agriculture, he says the trade-off is positive in managing weeds without using herbicides.

Most potato farms in the area grow potatoes once every two years, with the non-potato break crop being malting barley. But with snowfall that replenishes the aquifer used to pull irrigation water diminishing, Mr Rockey decided to replace the more water-hungry barley with a cover crop that uses less than 15cm of water compared with 50-56cm.

“We didn’t have the luxury of growing barley any longer,” he says.

Initially the cover crops were monocultures of sorghum-sudan or mustards for nematode control, but once that issue was addressed he changed to multi-species covers.

“Once we started growing these it opened our eyes to the benefits of diversity.”

“But there was something missing – livestock. Livestock grazing on the covers forces them to release different exudates into the soil and stimulates different biological activity.”

He works with a local cattle and sheep rancher and had to tweak his original cover crop mix to remove sorghum-sudan, adding millet, grazing corn and forage collards to maximise the feed value for the 100 head of cattle.

“I receive pasture rent which improves my economic situation, but I don’t see this as a money-making exercise, just one that offsets my costs,” he says.

Water is provided via tanks linked to the centre pivot, while a single electric wire around the edge of the field keeps them contained. The area is mob-grazed in pie-wedged paddocks to make sure all the species are evenly covered. “This system minimises weeds and compaction.”

A 1,000-head of sheep also graze the covers, but are managed by a shepherd and sheepdogs rather than electric wire.

The animals help cycle nutrients from the cover crops and the soil and make it available to the crops following it, but they don’t add fertility and offset any other input, he stresses. “When the animals have grazed, that’s when we add compost to replace the fertility exported when we harvest the crops.”

The ground is then prepared for the following potato crop using a minimal tillage system with one pass from a Sunflower cultivator and one with discs, with potato rows made the following spring, he says.