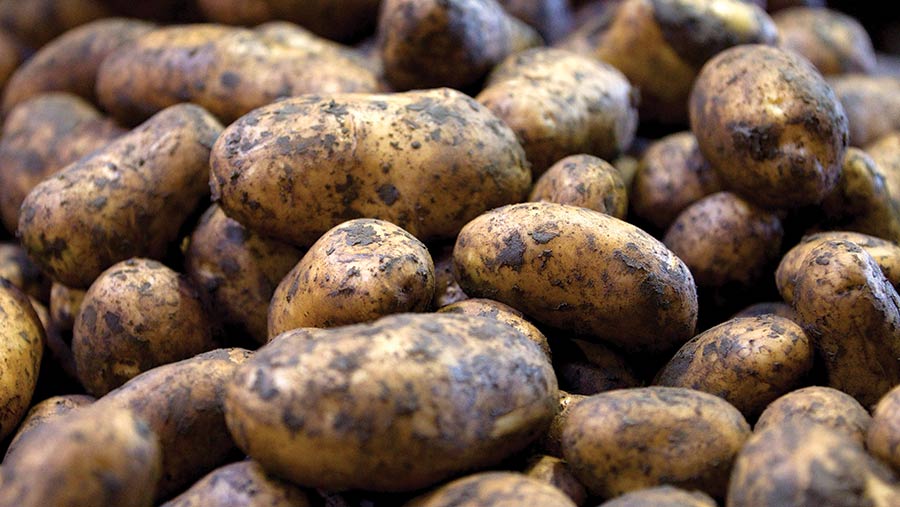 Ethylene can provide potato producers with a viable sprout-control solution in a range of situations, with one large potato processing company already using an ethylene delivery system in all of its medium- to long-term stores.

Ethylene is a naturally occurring plant growth regulator and, when maintained at suitable levels in store, inhibits the elongation of sprouts.

But like other sprout-control options, it has not gained a strong foothold in the market because of the availability, efficacy and low cost of CIPC treatments over many years.

There has also been the worry that ethylene has a negative impact on processing quality, with treatment potentially giving rise to increased reducing sugars and as a result, darker fry colour.

Finally, there is a perception that because ethylene is a gas it is completely unsuitable for use in old, leaky stores, as storekeepers are unlikely to be able to maintain suitable concentrations for adequate sprout control.

On the issue of cost, ethylene is now a much more attractive option for sprout suppression for long-term storage now CIPC is off limits, with spearmint oil and DMN (dimethylnaphthalene) much more costly on a per-tonne basis (see table).

On fry colour, AHDB storage expert Adrian Briddon, who has been working with the gas at the Sutton Bridge Crop Storage Research centre for many years, says there is undoubtedly a risk.

This is probably enough to rule out ethylene use when storing crisping varieties.

In crisp processing, small changes in sugars give rise to relatively large differences in fry colour. In addition, crisp processors don’t usually have the option to manage fry colour in the factory.

However, for French fry and other potato-processing methods, tolerances are higher, and in many cases, factories have the option of blanching out reducing sugars, which can help mitigate any change in fry colour.

Mr Briddon adds that the delivery of ethylene into a store is key for minimising any impact of the gas on fry colour, and concentrations must start off at very low levels before being ramped up over time.

“Any damage is done right at the very beginning when the ethylene is switched on. That’s why the set-up of the delivery system and sensor is so important,” adds Mr Briddon.

The perception that a volatile gas like ethylene cannot be sustained at adequate levels in old, leaky stores has been challenged by a trial carried out by Restrain in the Netherlands, within a 100-year-old ex-pig shed.

The company’s Paul O’Connor says that while storekeepers should do their upmost to mitigate any large leaks in these situations ahead of ethylene use, correct placement of the generator is the most important ingredient to success.

The highest concentration of ethylene is always closest to the machine, so if it is placed near a draught or route for air out of the store, there can be difficultly building gas levels.

In the old pig store, a corner with no direct leaks was found for the generator and subsequently a relatively constant ethylene concentration was maintained throughout the store and good sprout control achieved.

Furthermore, Mr O’Connor says consumption of ethanol in leakier stores can also be comparable to a more modern, well-sealed store. This is because there is less build-up of carbon dioxide, which can damage fry colour, so less frequent flushing with fresh air is required.

“In modern stores, ventilation programmes tend to be linked to carbon dioxide levels, so you tend to see greater drops in the concentration of ethylene, particularly at the start of programmes.

“In older stores, it remains much more constant,” he adds.

The final consideration before shifting to ethylene use in store is the potential of variability of control and effects on fry colour depending on variety. However, independent data on this is limited.

Mr Briddon says that there are variety specific interactions and the AHDB has started long-term trials testing key cultivars to tease out differences in response to ethylene that can help with store management.

“We will be able to provide that information to growers over the coming year and the first report will be published before the next storage season begins,” he adds.

The Restrain system’s major advantage is its flexibility and ease of use.

Users lease the portable unit with ethylene sensor and simply situate it appropriately in the store, plug it into a 240v electricity supply and fuel supply, and leave it to run on the desired programme.

Each unit can easily be moved if a business has multiple stores across different sites and one unit is sufficient to maintain a suitable level of ethylene for 5,000-6,000t of stored potatoes, or 4,000-5,000t in older, leaky stores.

For larger stores, additional generators may be required.

Users are charged an upfront fee of £185 for the equipment, then an application fee of £2.65/t, plus ethanol costs on top. The Restrain Fuel costs about £7.15/litre and typically, consumption is about 1litre/1,000t/day.

Users are required to have HMRC authorisation to receive, store and use the duty-free ethanol fuel used in the Restrain system and the application process is free of charge.

For maintenance, the only requirement is the annual replacement of the sensor that monitors ethylene concentration in the store, which is taken care of by Restrain.

Biofresh
Northumberland-based Biofresh offers its Ethylene Management Unit (EMU), which is permanently installed in the store and runs off a standard 13amp electrical supply.

The EMU then feeds bottled ethylene gas product Biofresh Safestore into the storage area from a storage cage, which must be located on hardstanding outside the building.

Customers can lease the application equipment for about £4,000/year or buy the system for about £15,000.

With one system able to service any size of store or multiple stores, costs can be spread across increased tonnage. Bottled gas is then supplied to the user.

Biofresh claims a major advantage of the system is its use of bottled ethylene gas, which is said to have fewer impurities than ethanol fuel.

The system can also deliver to any size of store, is installed and maintained by trained Biofresh engineers and once set up, running costs are relatively low. Unlike Restrain, there are no subsequent tonnage fees.

Disadvantages include a higher upfront cost, lack of portability and the additional requirement for a concrete pad and cage for safe gas storage outside the store. 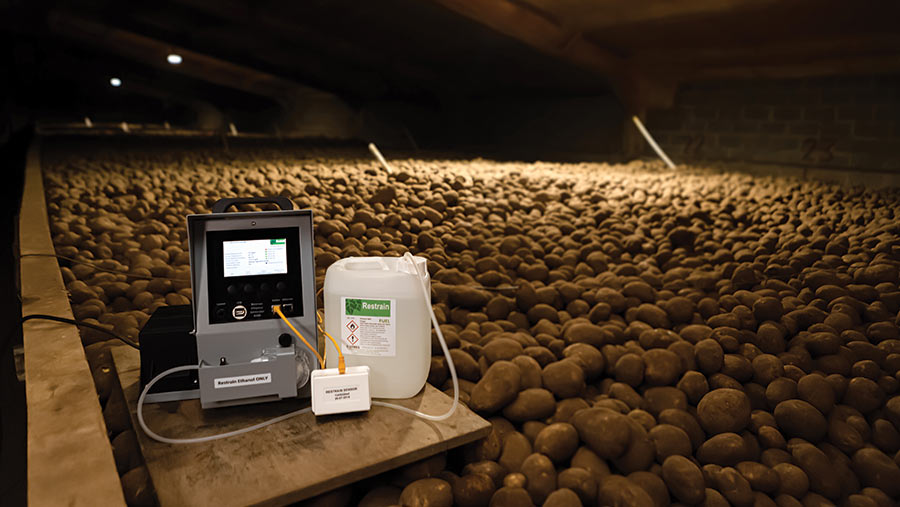 McCain Foods (GB) has been looking at alternative sprout-control options for the past few years as chlorpropham (CIPC) came under increasing scrutiny.

After positive ethylene trials in a 1,400t box store in 2016-17, confidence has grown to such an extent that the company and some of its growers are now using the gas in 60,000t of their medium- and long-term storage capacity this year.

McCain agronomist Jeff Beever says since the first experiment, ongoing commercial trials have improved knowledge of how best to use ethylene and manage its potential effect on tuber quality.

It has now been used commercially on almost all its main storage varieties, including Maris Piper and Royal, and more than a dozen of its growers are using ethylene, either fully or gaining experience with a limited tonnage.

Mr Beever adds that the company is using the Restrain delivery system, which is easy to set up and operate and also has the ability to be plugged into a store’s ventilation system.

This connection sees the Restrain generator automatically switch off when the store’s louvres are open to ventilate or flush carbon dioxide, helping to save ethanol fuel.

Ethylene efficacy
In terms of efficacy, he reports that in some varieties or seasons, particularly where dormancy breaks early, short sprouts can sometimes be seen.

However, these tend to be more brittle than uncontrolled sprouts or any that may occur in CIPC stores.

“Generally, these easily fall off when crop is loaded for delivery,” he adds.

In some stores, Mr Beever says sprout control has been better than with CIPC, as the gas distributes more evenly through the crop and even ventilation is less critical than if using a CIPC hot fog.

One area that needs attention when using ethylene is carbon dioxide build up in store, which when combined with the potential effect of the ethylene gas itself, can affect fry colour.

This is easily managed by daily flushing with fresh air.

In line with Restrain’s claims, Mr Beever also sees it less important for stores to be well sealed when compared with volatile alternatives such as spearmint oil.

“This is because the generator will try to maintain the required level and you get the added benefit that leakier stores mean less carbon dioxide build-up,” he adds.

A slow and slight effect on fry colour has been seen by McCain, but Mr Beever says it is manageable and so far, the company has had no problems that can be attributed to ethylene treatment of potatoes delivered into its factory.

“Why wouldn’t we try to make ethylene work when the cost is not too far away from that of CIPC?

“I do appreciate that it may not be the solution for all situations or markets and, as McCain, we do allow use of alternatives – currently only spearmint oil – and would welcome the approval of 1,4-DMN [1,4-dimethylnaphthalene] in the UK,” says Mr Beever.

He adds that ethylene’s efficacy can be further enhanced when used in combination with foliar plant growth regulator maleic hydrazide, if the product is well applied in optimum conditions.

“If and when DMN is approved in the UK, we would like to gain commercial experience with it and think it has potential as an initial application to enhance dormancy before switching to ethylene.”