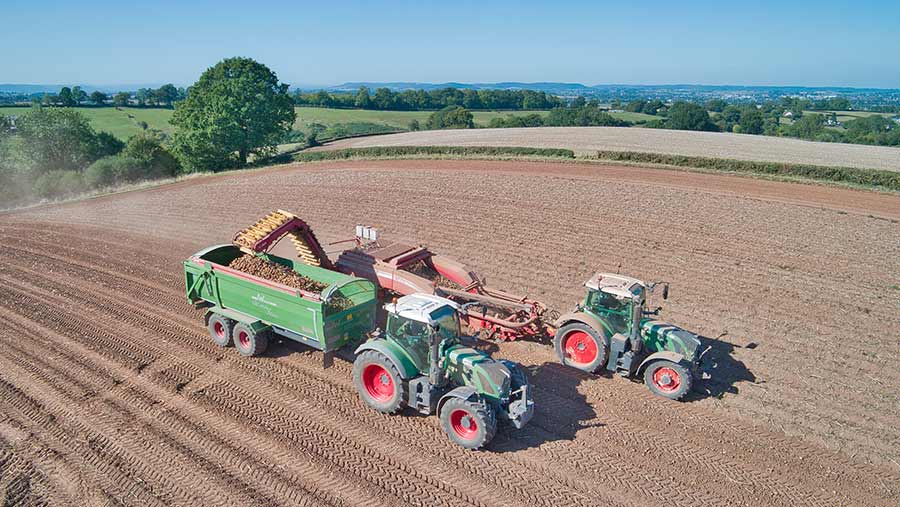 Potato yields are looking better in the UK than elsewhere in north-west Europe, where it is still too dry to lift crops.

The potato crop is forecast to be 3% larger than average in north-west Europe, despite extreme summer weather pushing the average yield down 2.4t/ha below the five-year mean.

This extra output is due to record high potato plantings across the five major potato growing countries in north-west Europe – namely the UK, France, Germany, Belgium and the Netherlands.

The North-western European Potato Growers Foundation (NEPG) estimates that the potato harvest across these countries will be between 27-27.3m tonnes, which is 12% more than last year’s drought-hit season.

Strong prices caused by last year’s shortages encouraged more plantings in all NEPG countries resulting in a record area of more than 611,190ha. France saw the largest growth, 14% above the five-yearly average.

However, while the UK saw a marginal increase of 1% over last year, the AHDB points out that the current 118,950ha potato area is still one of the smallest on record.

Across the five countries, the average yield is estimated at 44.7t/ha, compared with the five-year average of 47.1t/ha. Last year’s drought affected yield was only 40.9t/ha.

Within the five countries, huge differences are reported between varieties and regions. Regions with the fewest options for irrigation are seeing the lowest yields.

The lowest estimates come from Belgium, where the options for irrigation are limited with only 3-4% of the potato area under irrigation. Growers are complaining loudly about the ban on the use of surface water for irrigation.

Looking specifically at the UK, farmers have experienced better growing conditions than their European counterparts, with estimates suggesting that yields will match the five-yearly average.

However, UK growers are still counting the cost of extreme, variable weather in the form of higher numbers of green potatoes resulting from intense summer rainfall washing soil off furrows.

These European production estimates are not reflected in the current price levels and the NEPG expects that the price could increase on the Continent over the coming weeks, especially as demand among processors is greater than last season.

This season also kicked off with empty storage sheds, and did so slightly earlier than normal. The capacity of the processors continues to increase as well.

The processing season was only slightly disrupted due to early potatoes from Bordeaux, the Rhineland and Belgium all coming at the same time, which didn’t help prices.

The competitiveness of processed products from the EU on the global market will be better, with potato prices that are not as high as last year.

Here we take a look at yields on farms across the five key potato producing countries – the UK, France, Germany, Belgium and the Netherlands.

Views from the UK 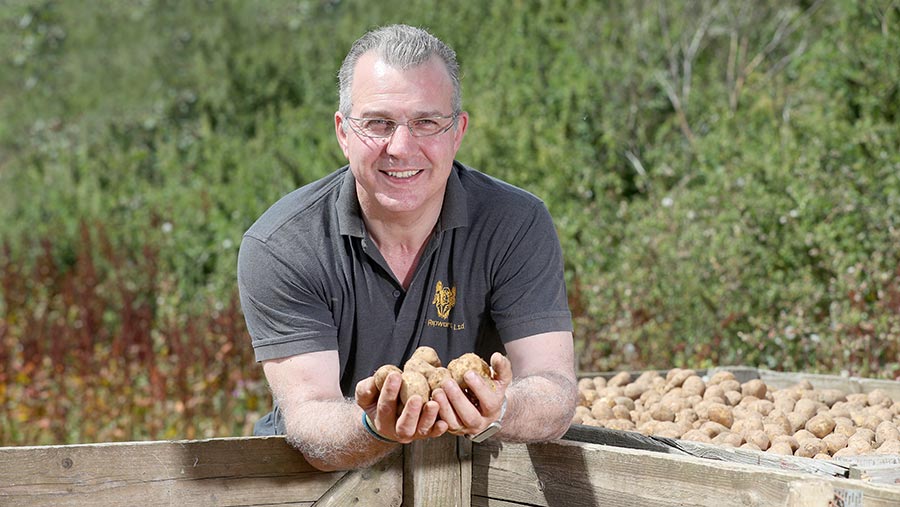 He has grown Gemson and Maris Piper, along with several other varieties on priced contracts for supermarket packers and processors.

His harvest has begun with the lifting of salads for supermarkets, which are yielding about 33t/ha.

“Those yields look good and as it’s been a good growing year for potatoes, all of my crops should have grown well,” he says.

However, for the past three weeks there has been little rain, meaning Mr Papworth has had to irrigate.

“We have been very lucky that we can irrigate, and it’s rained at the right time earlier on. We have to irrigate ahead of the harvester to soften the soil so it won’t damage the potatoes, but it’s more work and an extra cost.”

Mr Papworth anticipates some issues with green potatoes. “I think it will be a year for greens because of the heavy rain we had in June, which caused the soil on top of the potatoes to wash off. I’m seeing this already and more than normal.”

Another major concern to him is the level of virus present in his crop this year. “I have some crops which have 90% virus, producing an awful skin finish and terrible looking potatoes.”

The last infected crop he lifted was likely to see as much as 80% of the crop downgraded to stock feed, losing him thousands of pounds in value.

“This level of virus in seed is an issue for the whole industry that needs resolving,” he explains. “Some of my crops are not looking good at all and could be as bad as a write-off.” 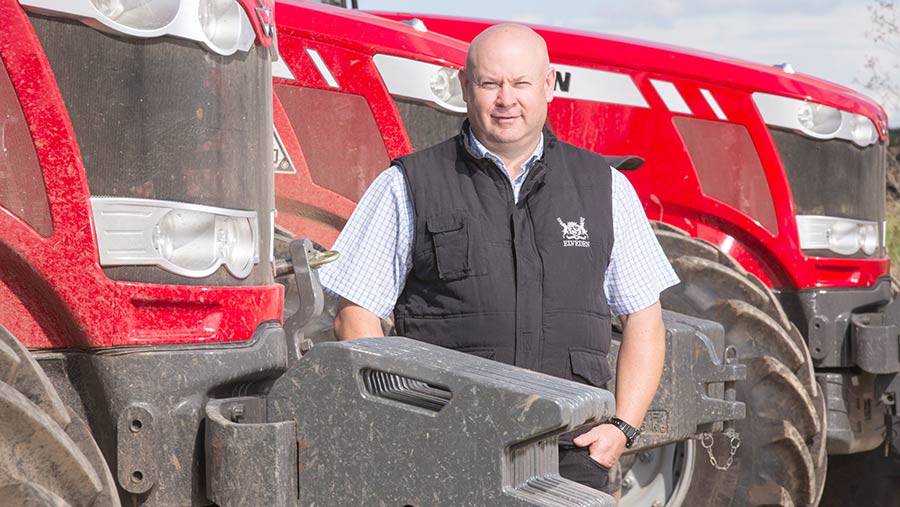 Elveden Estate, Suffolk: Extreme weather causes growth cracks
At Elveden Estate, in Suffolk, Andrew Francis has finished lifting all of his salad potatoes, which have yielded above average and have been of good quality.

“It’s been another challenging year for us, but in a different way to last year,” says farms director Mr Francis.

The very dry spring and early summer months, followed by very hot and then extremely wet weather has really tested the canopy duration of his crops.

“The challenge we face is how resilient certain varieties are to different weather events.”

As planting conditions were so good at the start of the season, a lot of crops started out looking fantastic, but have been clipped back by the variable weather in the later part of the summer.

“This could turn an exceptional year into one marginally above average, and one not without its quality challenges,” he adds.

“The way some canopies had an earlier senescence than we would like, I would be nervous to say we would have above-average yields.”

He’s just starting to lift his set skins for storage, which are producing a mix of good yields and pockets of quality challenges such as growth cracks due to the extreme weather.

“This could be a challenge when we are thinking where to put them in terms of market.

However, it’s too early in the season to try to quantify the impact of these pockets of poorer quality. You can dig as many samples as you want, but until the harvest goes in, that’s the acid test.”

The other challenge for Mr Francis has been the dry soil conditions. “Though this is good for moving machinery, it’s probably drier than ideal from a damage protection perspective. So we are doing targeted pre-harvest irrigation,” he explains.

“Though we’d rather not do it, as it’s an expense and logistical strain, we do need to look after the quality, but it’s a big risk if we then have heavy rain.”

Unlike other growers, Mr Francis hasn’t been badly affected by virus issues. “We’ve had background levels, but it does seem to be creeping up year-on-year.”

Views from the Continent 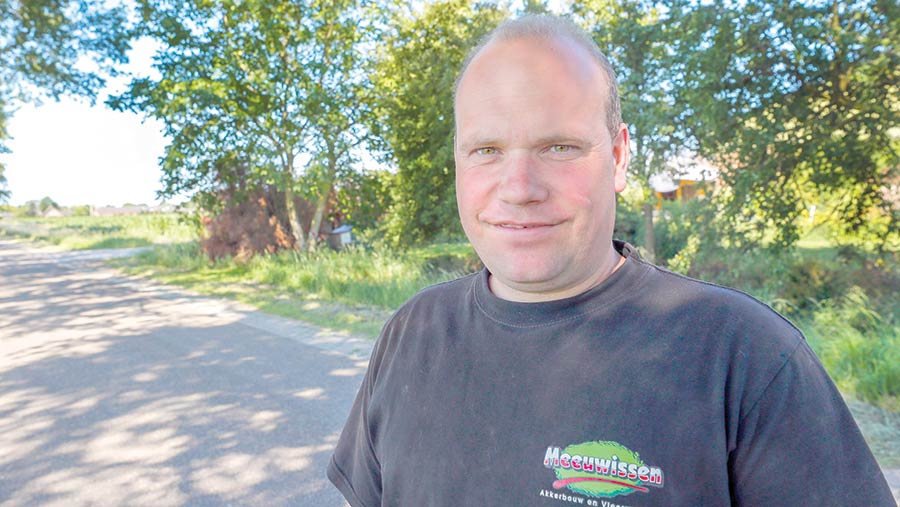 Netherlands: Disappointed with predicted yields
Rob Meeuwissen in Gastel (North Brabant) is disappointed with his test dig results for his 55ha of Fontane and 23ha of Ivory Russet chipping potatoes, which are grown on sandy soil.

The digs suggest that the Ivory Russet will be below average, with plots ranging from 32t/ha to 63t/ha.

“Size is fine; on average at least 90% of the tubers are in the contract size range of 45mm and above,” he says.

Fortunately, it looks as if the Fontane potatoes will do better, and are expected to yield close to the multi-year average.

He has irrigated the potatoes five to six times and despite the dry hot weather, he has had to spray weekly for blight.

This is in contrast to last year, when he sometimes didn’t have to spray against blight for up to three weeks, so has not benefited from any cost savings like last season. 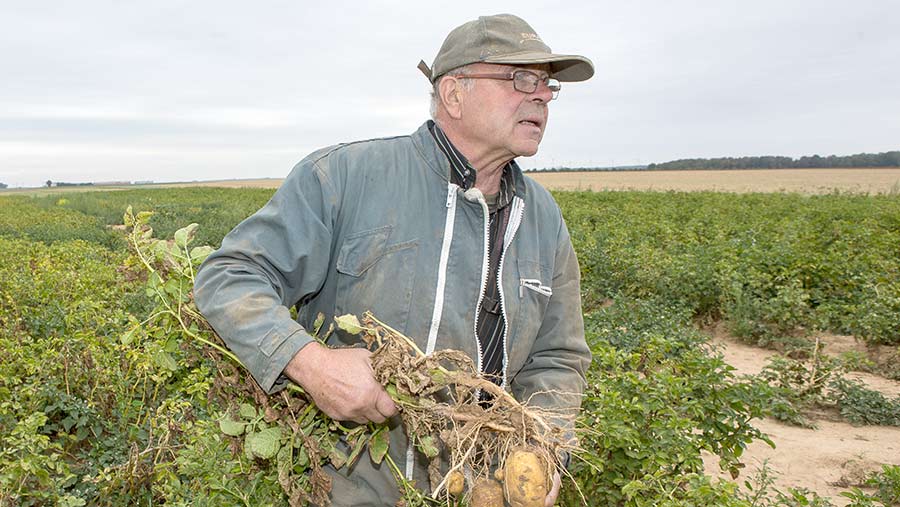 France: Potatoes are at the stage should have been in mid-August
Michel Lefever’s potato crop 75km north of Paris is still looking green as he aims to keep it growing for as long as possible to get closer to his yield target of 50t/ha.

He has already irrigated his crop six times this season using 20-25mm of water each time and has decided against desiccating to avoid losing days of growth.

“I want to keep them green for as long as possible. At best I could get another 1t/ha a day, although that won’t be happening this September,” he says.

“Once again, it’s been too hot for a good yield.”

His test digs to date have found that each plant has 8 to 10 tubers, with a few plants having fewer.

“This variety generally doesn’t have many tubers per plant.” He doubts whether he will actually get the 50t/ha he’s hoping for this year.

“I would’ve preferred them to have looked like this in mid-August rather than now.” 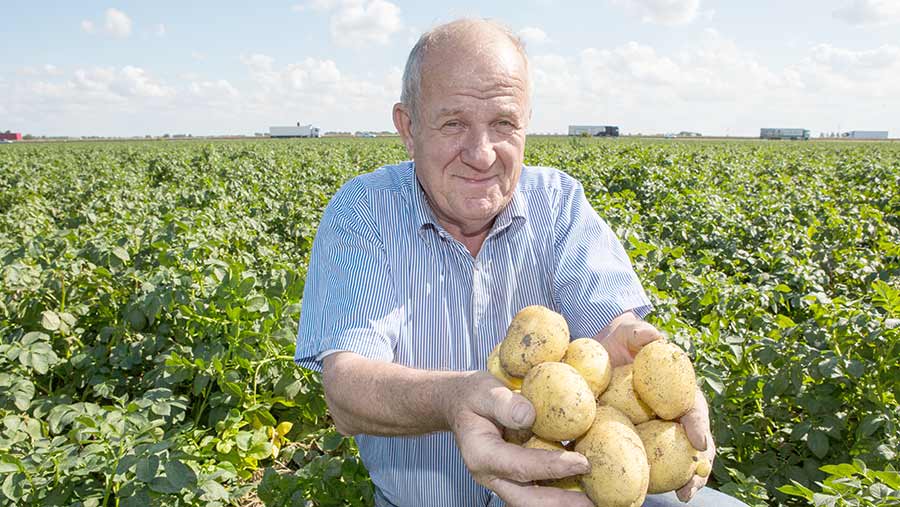 Belgium: 35t/ha on average, 30 last year
Luc Vandenberghe believes he will only achieve an average 35t/ha for his 160ha of Markis and Challenger chipping potatoes, due to a local ban on irrigation this summer.

Throughout the year, it hasn’t rained 20-25mm once and he has only seen 163mm of rainfall between April and August. “I have an irrigation system, but the Governor has put a ban on irrigation.”

Two thirds of his area is under contract while one third is free. “Last year, the average net yield for my farm as a whole was 30t/ha and I needed all of my free land area to fulfil the contracts. I think we can get to 35t/ha on average this year.”

He says the crop still has potential and it may suddenly gain another 500kg/ha each day, although growth has now been at an almost standstill for 14 days. 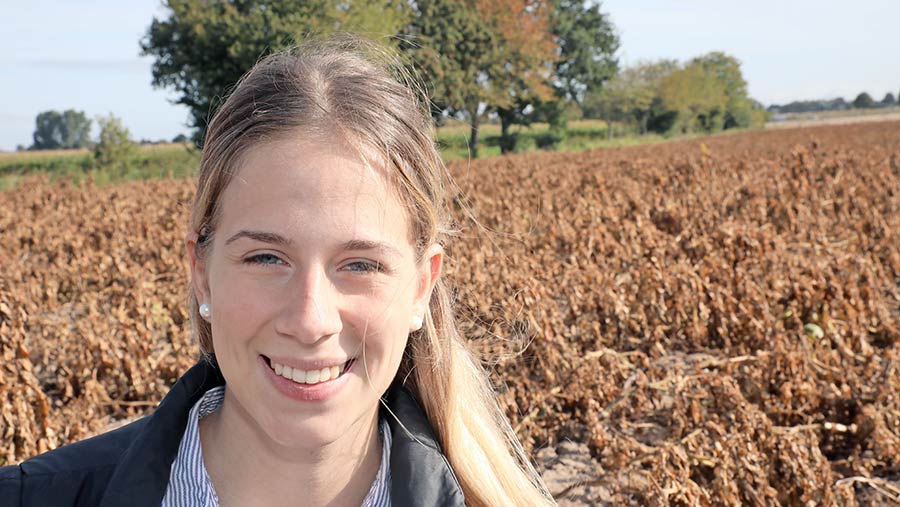 Germany: Potato crop suffers drought again
Drought has hit Anna Müller’s potato crop for the second year in a row, although yields are expected to be better than last year when the farm faced its driest summer for 35 years.

She farms 200ha of arable land with her father and sister in Titz, of which 75ha is potatoes. The family planted the crop at the normal time in the first week of April and it became very dry in June, after which the drought continued.

“Fortunately this year, we didn’t have the extremely long period of heat and drought that we had in 2018. The potatoes, therefore, grew better compared with last season, when every hectare yielded red figures.”

She estimates that the yields for the various potato varieties will probably be about 46t/ha after irrigating three to four times.

Last year’s drought prompted the family to change their varieties, dropping Innovator and opting for “stronger” varieties that require less water instead.

“The Fontane potatoes have grown nice and big, with tubers of 40mm and more, but there are fewer tubers on each plant. The Challengers are somewhat smaller, 40mm or under, but they have more tubers,” she says.