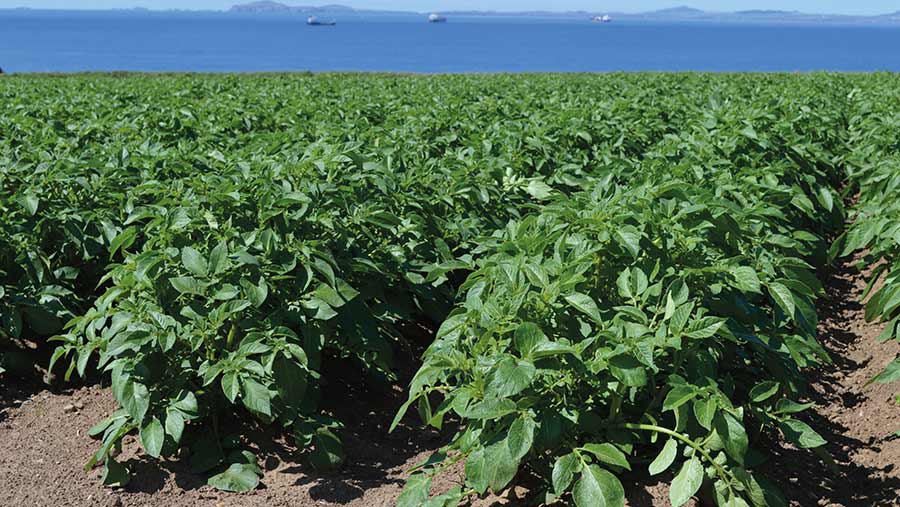 Morgan Scale is growing carbon-neutral potatoes in west Wales by using his cover crops and crop rotation to offset greenhouse gas emissions from his spuds and so produce for the UK’s first zero-carbon potato brand.

With cover crops grown through the summer and more grass leys in his rotation, he is looking to feed his soils in preparation for his main crop potatoes, and is cutting back sharply on bagged fertiliser and cultivations as his family farm embraces regenerative agriculture.

The farm is already sequestering enough carbon, not only to offset the farming side of growing potatoes, but also to offset emissions along the potato supply chain, from transport, storage, packaging and all the way to the kitchen table to produce a truly zero-carbon spud.

The farm’s rotation is now centred around the potato crop, and Mr Scale’s area has doubled in the past five years as he takes advantage of Pembrokeshire‘s good potato growing climate of high rainfall together with fertile soils – organic matter in this mixed farming area can be up to 10%.

“I believe by introducing more cover crops and grass into the rotation we are feeding the soils and this will allow us to grow potatoes every three to five years,” he tells Farmers Weekly.

His potatoes and those from five other Pembrokeshire growers are now available under the Root Zero brand throughout the UK.

This is happening through a deal with Waitrose and the Co-op via his local packer Puffin Produce, which promises to make growing the brand “financially sustainable”.

Mr Scale’s family farms 360ha of silty loam soils and he has integrated the potato crop along with suckler cows and sheep grazing mixed leys, together with maize and a small area of spring barley.

The growing of traditional early Pembrokeshire potatoes has declined to just a handful of farms.

Puffin is reluctant to say what price premium it is offering, but from the grower’s point of view, Mr Scale is reducing his inputs in terms of fertiliser and fuel for cultivations, and spearheading a zero-carbon potato brand that could well have great consumer appeal.

After a first successful year, this is his second season with this approach.

He needed to plan the rest of his rotation to offset the potential damage potato crops invariably inflict on soils by heavy cultivations and often wet harvesting conditions.

“Rotation is the key, with our herbal leys being very important, while the cover crops were the final piece in the jigsaw to produce a multi-species biomass to feed the soil and then, when grazed, give readily available fertiliser,” he says. 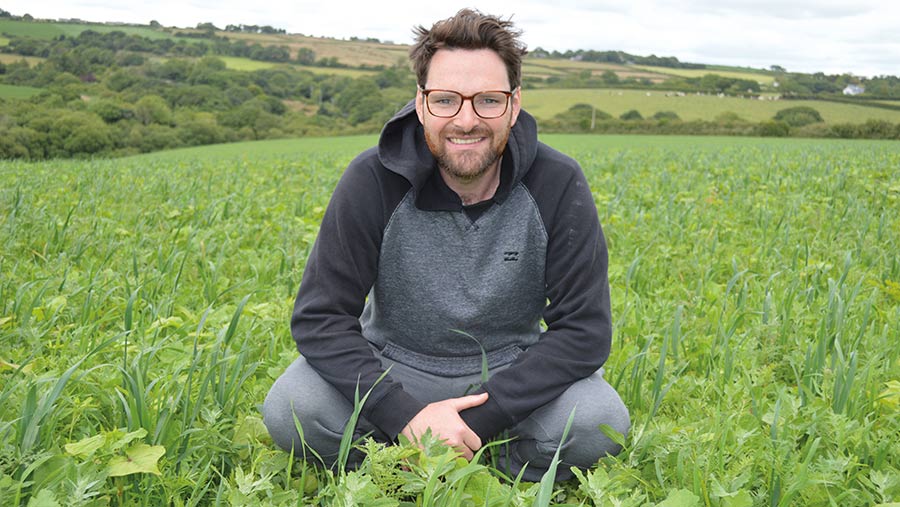 Currently, the farm is looking to grow potatoes in a one-in-four year rotation and the planning for potatoes starts with a “summer” cover crop.

After a first cut of silage is made in May, Mr Scale aims to drill the cover crop into the grass ley.

The cover crop mix he is using is 50% grasses, largely oats; 25% legumes such as clovers and vetches; 20% brassicas such as forage rapes and turnips; and finally 5% flowering crops such as phacelia, buckwheat and sunflowers.

He says that to maximise the benefits of the summer cover crop it is essential to use the best growing window and produce a big biomass crop and hence reduce inputs for the next growing crop of potatoes the following spring.

The cover crops establish well and grow strongly through the early summer. By September they can be nearly 2m tall.

They are then grazed off by livestock and Mr Scale favours sheep as they have less chance of damaging the soil in potentially wet autumn conditions compared with cattle.

He points out that this is a big investment ahead of the potatoes, effectively taking land out of production of a cash crop for a year before the spud crop, but he is still getting a first cut of silage and also good autumn and winter feed for his livestock.

The land is left undisturbed for as long as possible so it is not left exposed to the area’s high rainfall of 1.2m a year.

The farm has not used a plough for two years to maintain soil structure ahead of a potentially wet spring.

In mid- to late March, a Top-Down disc-tine-leveller-packer cultivator is used across the land twice to lift the soil to help it dry out rather than turning it over and leave it exposed to the weather. A destoner is then used and the potato planter soon follows.

With the farm’s first zero-carbon crops last year, the traditional potato nitrogen fertiliser rate was cut from 225kg/ha to 100kg/ha without any effect on tuber yields, and this season he is trialling some areas with as little as 50kg/ha.

“We are looking to reduce the cost of production in term of nitrogen and streamlining cultivations, and so make the growing of potatoes more sustainable going forward,” he says.

Mr Scale adds that they have a natural advantage in producing potatoes in a high rainfall area, meaning that irrigation is not often needed while the livestock dominant area often gives fertile soils for growing arable crops.

Lifting starts in the first week of August to avoid harvesting in wet autumn weather.

Fertiliser and fuel are calculated to account for nearly 90% of greenhouse gas emissions from the growing of potatoes, with the rest largely made up of pesticide use, seed and irrigation.

Therefore, the fertility building from leys and cover crops helps cut fertiliser use and the fewer cultivations save on diesel.

One area under investigation on the farm is fungicide use. In a heavy rainfall area, blight fungicides are a necessity and the spray programme is carried out once a week from the end of May.

This is when plants start to touch along the rows, and so varieties with some blight resistance are being grown, such as Orla and Manhattan.

Currently, the farm is growing 28ha of Maris Piper for the pre-pack market and 20ha of Marfona for the early baking trade, plus a range of other varieties. Yields have been fairly constant at 50-75t/ha over the switch towards the regenerative approach.

“Regenerative farming has to be about feeding the soils in terms of cover crops, rotation and adding organic matter,” he says. 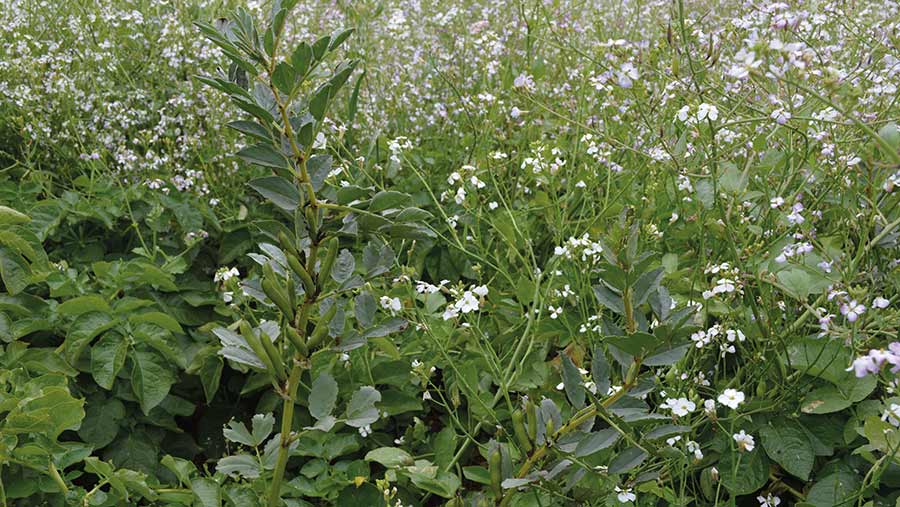 In a move to reduce bagged nitrogen fertiliser requirement even further, the farm is trying to grow companion crops in with the potatoes.

Mr Scale has tried a mix of peas, beans, vetch and buckwheat and is still trying to assess the full benefits.

One early observation is that tubers dug up in early July look to have less common scab when grown with a companion crop, compared with potatoes without any companion crops, and this may be down to better biology in the soils, says Mr Scale.

Packing for a zero-carbon market

Haverfordwest-based potato packer Puffin Produce is looking to expand by tapping into the potential growth market for zero-carbon potatoes by encouraging its growers down a more sustainable production route.

The group is aiming to make sustainable potatoes affordable by using the natural advantages of the area for spud growing, in terms of high organic matter soils, good rotations in a mixed arable and livestock area and less need for irrigation with the high rainfall.

Group CEO Huw Thomas says the company is working with six of its growers who can offset the carbon used on their farm, to help them offset carbon emissions through the supply chain, and he has high hopes for the brand’s success

”As the brand grows we hope we will pull in more of our potato growers and the aim is that consumers will pay no more for sustainably produced potatoes,” he says.

The operation, which started out as a growers’ co-operative, has been a limited company since 1995, with an annual turnover of over £30m, and 90% of its business is in potatoes, with the rest in packing cauliflowers, leeks, savoy cabbages and daffodils.

It has 25 Welsh potato growers supplying its packhouse, and within that number there are the six growers who produce potatoes that can offset all the carbon emissions from growing the crop.

Mr Scale is actually offsetting the full carbon footprint of his potatoes completely on farm and through the whole supply chain by growing summer cover crops rather than just in the autumn, while the 110 miles of hedgerows on his farm also help sequester carbon.

The group helps offset the carbon footprint through the supply chain of the other five growers with carbon credit offsets.

The offsetting of carbon emission through the supply chain from Mr Scale is particularly impressive as the group calculate that only 18% of the carbon footprint from growing potatoes in Pembrokeshire comes from the farmer, with the rest from package, transport, cooking and wastage.

The group is a big supplier of potatoes to the Welsh supermarkets, but the big break for the Root Zero brand came in September 2021 with the UK-listing of the brand by Waitrose and the Co-op.

Stephen Mathias, the group’s head of field services, says the cover crops give benefits in terms of cutting nitrogen use.

Testing soils in May on Mr Scale’s farm showed a potato crop after a cover crop had 125kg/ha of soil mineralised nitrogen, while after a maize crop there was only 75kg/ha.

He points out they are growing potato varieties with some blight resistance, such as Orla, which also has good resistance to blackleg, stores well and harvests early, and also the variety Manhattan.

The traditional early “loose skinned” potatoes are grown now by only a handful of Pembrokeshire growers, as this market has declined in recent years due to ability to store competing “baby” potatoes such as Maris Peers over the winter.

The widespread use of fleece also means big East Anglia growers can compete in this early market.