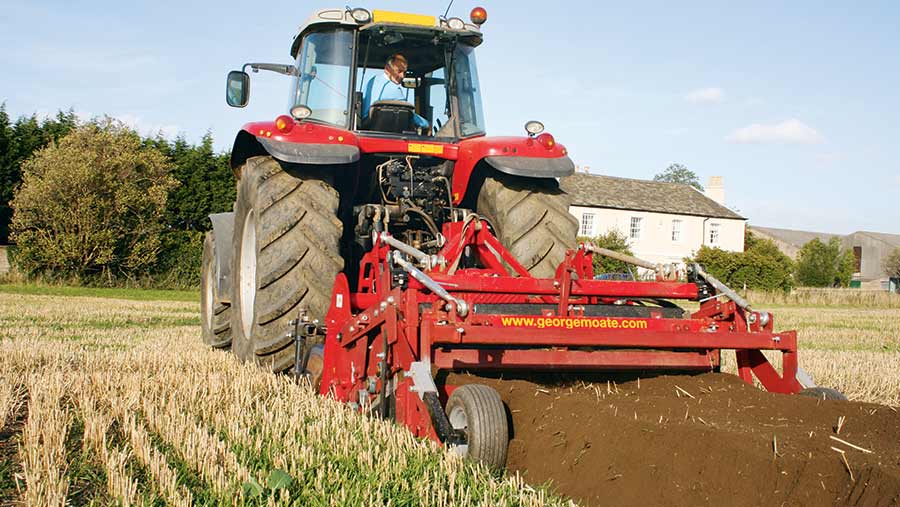 Trials by crop consultants Niab Cuf have revealed that intensive cultivations have no benefit on potato yields, tuber size or quality, marking it out as a process that farmers can simplify to cut costs and improve soil structure.

Northern Irish grower Richard Orr has put this theory into practice, cutting his establishment costs by £250/ha by switching from a traditional bed-till and destoner regime to a one-pass system using a TillerStar.

The TillerStar uses patented star finger rollers to till, sieve and transform unprepared ground into ridged beds in a single action, cutting out the need for multiple passes with several machines.

While establishment costs have been reduced, Mr Orr’s potato yields have increased by 5-10% since making the switch seven years ago to a single-bed model, and now yields on average 50t/ha.

The move was prompted by a desire to simplify the establishment process across the 15-20ha potato area as just Mr Orr and his father work the 75ha farm, where they also grow winter wheat and spring and winter barley.

However, reducing cultivations before potatoes was also the last necessary step in moving the whole farm away from ploughing.

“People said to us we wouldn’t be able to go to reduced tillage with potatoes in the rotation, so that’s when we started looking at ways we could reduce it,” he says.

Mr Orr ploughed all the land going into potatoes before using the TillerStar the first year, but after trying it straight into stubbles the following season, he now goes straight in with the machine, as it prefers firmer ground.

Now after winter or spring barley, an autumn cover crop of radish, vetch and oats is drilled to keep the soil covered over the winter months before being incorporated into the soil during establishment to help feed the potatoes.

Even in a very dry year like last season, the cover crops still fed the potatoes well.

Alongside establishment costs being reduced by 25-30%, the combination of reduced tillage and the use of cover crops means the soil isn’t slumping after the potatoes are planted.

“We found that destoning pulverises the soil too much, whereas the combination of cover crops and reduced tillage results in better root and soil structure,” Mr Orr says.

Mr Orr says he hasn’t seen any negative effects from moving to reduced tillage, with potatoes going in better, although he does admit skin finish can be affected sometimes.

However, as all the potatoes grown on the farm are sold direct to consumers through the farm shop, Mr Orr is more focused on eating quality, with the cover crops helping achieve the high dry matter content demanded by consumers, while also allowing him to reduce his nitrogen inputs.

As the machine places the stones underneath the potato beds, there is no need to plough before the following crop to scatter the stones, with the ground instead being disced and tined using a Kvernland cultivator and the wheat crop drilled with a Horsch drill.

While Mr Orr feels he has determined the best establishment practice, especially as he has now upgraded to a two-bed tiller, he says there is still a lot to learn about which cover crop species are the best.

Mr Oatey grows 160ha of Estima, Michelle, Wildra and Premiere for processing and pre-packaging on the 1,200ha arable farm he manages in south-east Cornwall.

Normally, planting on the farm starts in the middle of March and is finished by the middle to end of May, but thanks to the very cold, wet spring, planting started in May last year, a full month later than usual.

Under pressure to get on with cultivation and bed-set, the team decided to try something radical in the hope that it would speed up cultivations; switching the plough for a Sumo Trio. 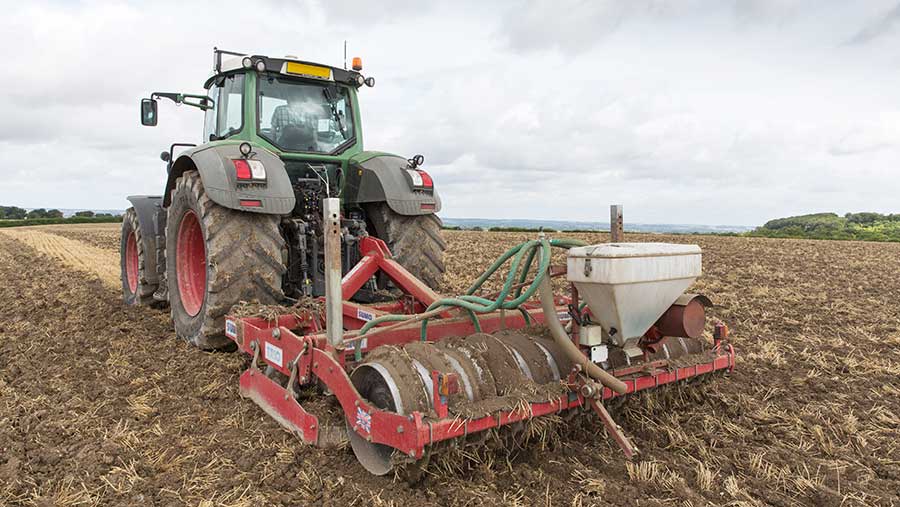 While ground preparation with the Sumo was potentially faster, and brought up the bed-till quite quickly, it is not a panacea as it can only be used in dry conditions.

Mr Oatey and his team decided to try the Sumo because conditions suddenly went very dry in late spring, and only then on specific fields totalling 20ha.

“It worked in certain circumstances where the ground was nice and dry, but if it had been wet at any depth, we would have had to plough to dry it out,” he says.

While yields may have suffered slightly from the change, it is difficult to determine the effect of the change in cultivations and of the extreme weather last year.

Potato yields were variable and not as had been predicted, says production manager Andrew Finnamore.

Thin land near the coast did really well due to catching sea mists, while unirrigated land performed better than irrigated.

“We have not had to do a lot of irrigation for a few years, but if the climate is changing, we will need to invest in it further to give more control,” he says.

Further work will be needed to draw conclusions from the change in cultivation, and preferably in a more normal year for weather, so the Sumo will be used on a similar area again this year if conditions are right.

Although Mr Oatey does a lot of minimum tillage in cereals on the farm already, ploughing is still carried out once or twice in the rotation, usually in front of barley or potatoes, as this results in better rooting.

Ploughing is also an effective method to keep on top of sterile brome populations on the farm, especially as there is little in the way of chemistry available to enable them to tackle the weed in winter barley.