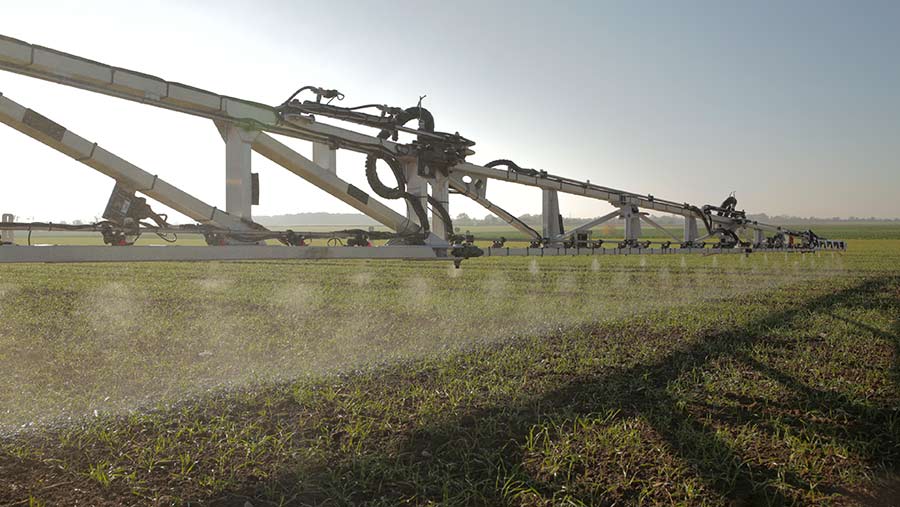 It is in response to more established competitors bringing options such as spot-spraying – for example, Afgrisfac’s AiC Plus on its Condor range.

The first step to enable the firm to offer spot spraying is the impending introduction of its Autospray pulse-width modulation (PWM) system, which will replace its Multispray delivery mechanism later this year.

See also: Why fungicide timing is key to control ramularia in barley

Typically, when increasing or slowing a sprayer’s forward speed, pressure is increased or decreased to maintain the correct application rate, but this will result in suboptimal coverage at lower pressures as the nozzle’s spray pattern deteriorates, as well as creating finer droplets and increased drift risk where pressure is increased.

Multispray overcomes this with its ability to switch between nozzle types on the go, either manually or automatically, based on forward speed.

For example, on a Multispray Duo, a yellow 02 nozzle will give a coarse spray and when speed and subsequent pressure is increased to 3bar, it will switch to a red 04 nozzle, producing a less-drifty, very coarse spray.

The highest level of precision from this technology is found in the Multispray Quattro, which gives operators four nozzle options, which can be run individually or in pairs for up to 15 different combinations.

The Duo will remain on the market as an option, but the Quattro will be replaced by Autospray PWM, which provides a much simpler solution by using just one set of fixed-orifice nozzles across the boom.

Kuhn’s PWM system can turn the flow on and off up to 20 times a second using an electric solenoid in each nozzle. This enables the operator to easily control spray pattern and quality for optimal coverage, while reducing drift risk.

The firm’s new boom offerings, which include the bi-fold Large Equilibria Aluminium 2 (LEA 2) and tri-fold LEA 3 and LEA Extra, have a 25cm nozzle spacing option – in addition to a more conventional 50cm – so it can be run closer to the deck at higher speeds, improving coverage and further reducing drift.

“Essentially, the farmer selects whether he or she wants a fine, medium or coarse spray and then it’s just a matter of spraying the field while the machine takes care of the rest,” explains Alex Birchall, of Kuhn UK.

“The introduction of the Autospray pulse width modulation system will be a key stepping stone towards commercialisation of our spot-spraying concept,” he adds.

For the past three years, Kuhn has been working with Carbon Bee, a start-up tech company based in Valence, south-eastern France, on bringing the concept to life.

Founded in 2015, the company now employs 21 people with a mix of skills, including deep machine learning, engineering, agronomic research and ag solution development.

The business already delivers imaging technology to the agricultural market and in particular, weed and crop disease detection.

Its Impaact weed control solution is the technology being developed and integrated into Kuhn’s sprayers as part of its I-Spray offering.

Hyperspectral cameras are located at 3m spacing across the boom and scan the ground and/or crop. It is able to identify weeds, then spray them with herbicide solution in real time via the Autospray PWM system.

The machine learning element is the clever part, identifying the weeds by their spectral signature (the light reflected back from the plant), shape and texture, pulling from a vast database of botanical information compiled by Carbon Bee’s agronomy team. 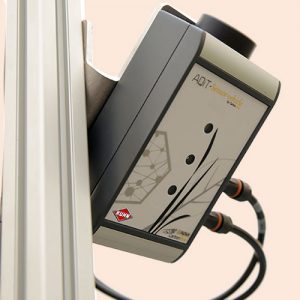 Sensors measure the light reflected back from the plant

Carbon Bee’s general manager, Colin Chaballier, says most trials have shown 80-99% accuracy and the system is able to identify most dicotyledon weeds among a growing crop.

Grassweed identification and spot-spraying is currently in development, as is the detection of disease symptoms for more targeted fungicide applications.

Potential chemical savings are significant, with trials so far suggesting that between 50% and 80% could be slashed off herbicide spend using the system.

Kuhn is aiming to guarantee the top end of that range before bringing I-Spray to market.

Mr Birchall says the concept is proven and the next hurdle to overcome is how best to achieve its full potential in the field. There are a number of practical implications to consider.

Firstly, a sprayer rarely travels through a crop to treat one problem with one chemical solution, so complex tank mixes are often required to cover the weed spectrum present. 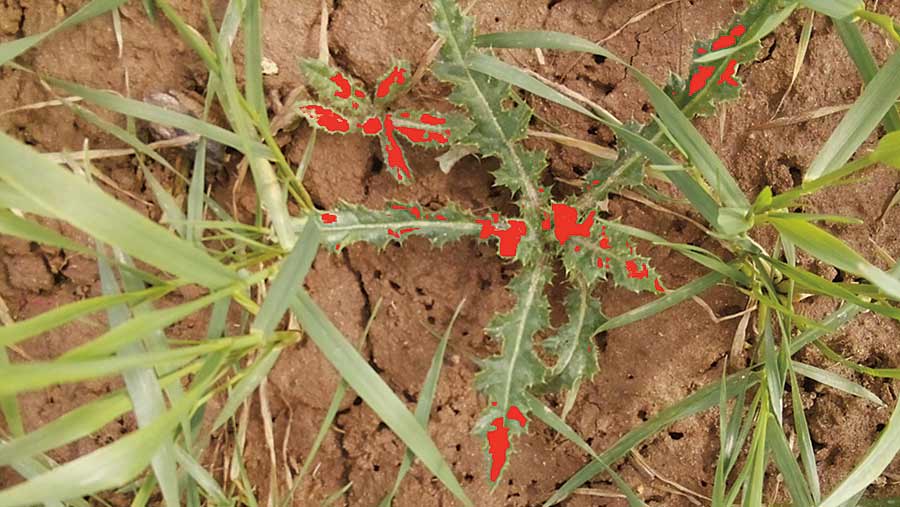 The system can identify most dicotyledon weeds among a growing crop

In addition, some products aren’t compatible with each other and may need to be applied separately, so spot-spraying two weed species with two incompatible herbicides may not be possible in one pass.

Furthermore, in a real-time spot-spraying scenario, it will be hard to judge how much spray solution is required in the tank for each field or crop area.

For the first two issues, Mr Birchall says heading down the direct-injection path – where the correct dose of neat chemical is injected into the spray line before delivery – might provide a solution.

On the latter, he says prescription maps would be the obvious way of gauging how much chemical is required for each job, but this would remove the real-time element.

“We could put I-Spray on the market now and be able to spot-spray, but we want the farmer to be able to get the most out of the system, with as much chemical saving as possible.

“We are trying to answer these questions in trials. It will then go into pre-market testing in the field and won’t be available until late 2020 at the earliest,” he adds. 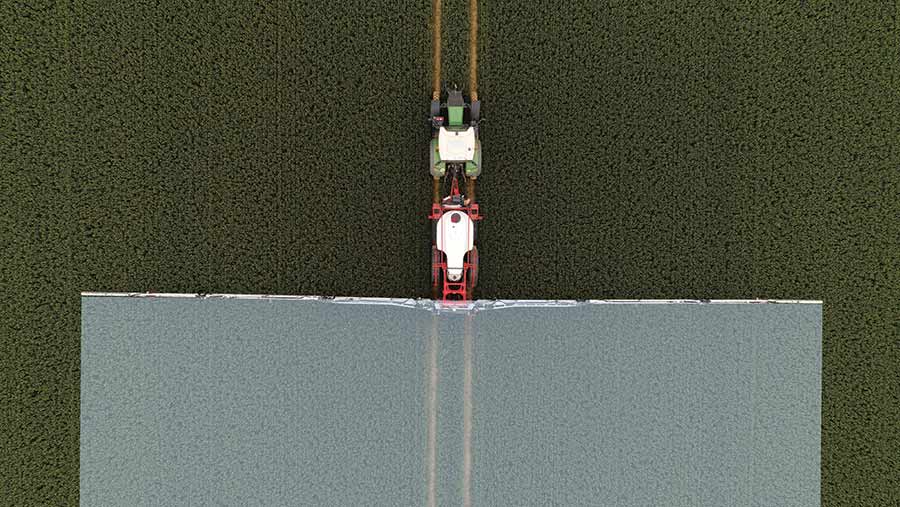 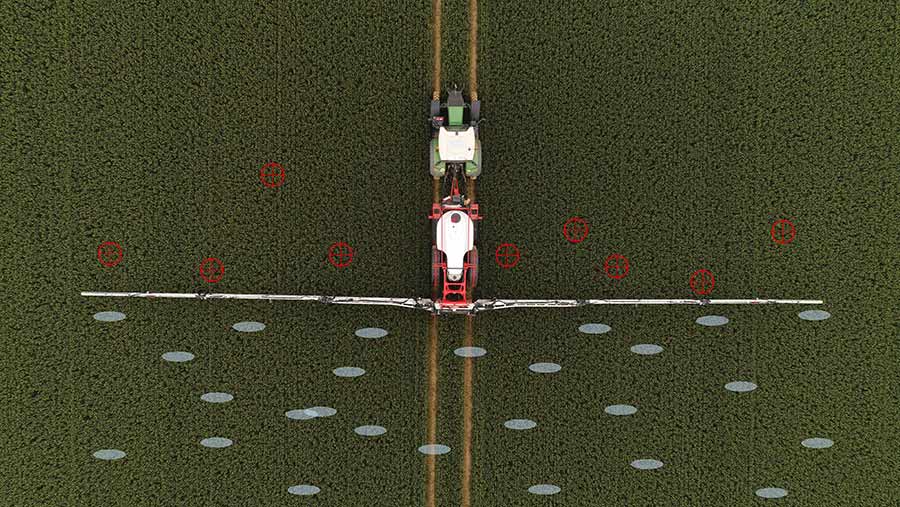 The I-Spray system offers big savings on chemical use

A PWM system to enable spot-spraying will vary in cost depending on boom width, but a 30m machine will command a premium of about £20,000 over conventional technology.

For I-Spray, pricing is yet to be set, but will be based on the value of potential chemical savings it provides, so won’t come cheap.

With Agrifac charging more than £100,000 for its AiC Plus, buyers can expect a Kuhn system to be in a similar ballpark.

Carbon Bee will also be offering the technology to the wider industry as an after-market option on sprayers already fitted with PWM.