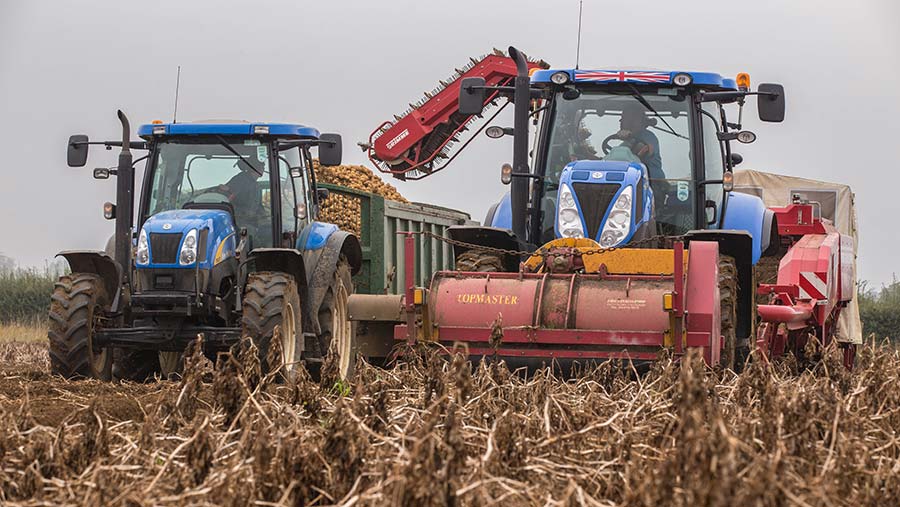 Potato growers will now be able to treat their crops with a key product to control volunteers and suppress sprouting in store, and still use any potato waste to feed to livestock.

The ban on feeding stock with maleic hydrazide-treated potato waste is being lifted, leaving growers free to use the active ingredient without fear of losing their end markets.

Maleic hydrazide – contained in products such as Crown MH and Fazor – is a plant growth regulator applied before harvest to help control volunteers and to provide useful sprout suppression once potato tubers (or onions) are in store.

When the active was granted Europe-wide re-approval in 2017, manufacturers lacked the data to show that a maleic hydrazide metabolite, 3-pyridazone, posed no risk to consumers from eating livestock products when that stock was fed with treated crop waste.

The Health and Safety Executive (HSE) had placed a label restriction on any maleic hydrazide product sold after 1 May 2019, which stipulated that any out-grades or peelings derived from treated potato and onion crops must not enter the livestock feed chain.

With packers and processors unable to guarantee segregation of treated and untreated waste without significant costs, this resulted in a “no-take” policy for crops treated with maleic hydrazide, and left growers unable to use the product for fear of being unable to market their crops.

However, the manufacturers have gathered the relevant data to show that there are no safety concerns to livestock or consumers and so the HSE has lifted the restriction on all maleic hydrazide products.

Nick Badger, potato product manager at Certis, which markets Crown MH in the UK, says the move is positive for the industry, allowing growers to use the product with peace of mind ahead of the imminent maincrop harvest.

“Many potato crops suffered from secondary growth and tubers sprouting during last summer’s hot and dry weather, but when treated with maleic hydrazide both issues were adequately controlled,” he says.