Potato growers could slash water use and preserve soils by using a machine to stop water flowing down compacted tramlines.

A trial conducted at the Elveden Estate last season as part of its collaboration with the AHDB Strategic Potato (SPot) farm network showed using a ridging device in tramlines after planting would slow down water flow after rain or irrigation.

The water and sediment would instead be diverted into potato beds, reducing water and soil loss. 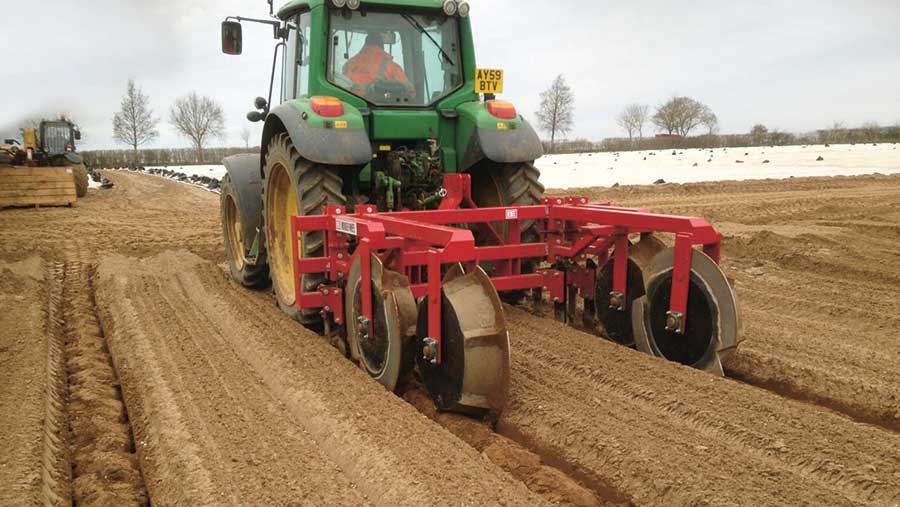 The estate sits in the Cam and Ely Ouse water catchment area and the trial attracted sponsorship from local water companies, as it also has the potential to reduce nitrate pollution.

See also: Why one potato farmer is cuttings his N fertiliser rates

Three different machines were put to the test alongside a control area – the Tied Ridger from Briggs, the Wonderwheel from Bye Engineering and the Aqua Agronomy Wheeltrack Roller from Creyke.

Watch the three videos of the machines in action in the player below in the same order as described above:

The difference in run-off was also compared between boom and rain gun irrigation systems by running the ridging machines on plots under both conditions.

Research co-ordinators, Ed Bramham-Jones and Joanna Niziolomski say the results show there was more than a 90% reduction in water loss between the control plots and the plots with ridges left in them.

The effect was even seen after other machinery, such as sprayers, had rolled over the ridges and degraded them compared with tramlines where the ridges had not operated.

There was no significant difference between the performance of any of the machines in terms of water loss, nor did the machinery reduce run-off at the base of ridges that were not tramlines, highlighting that the machinery bears the brunt of the blame for subsequent soil problems. 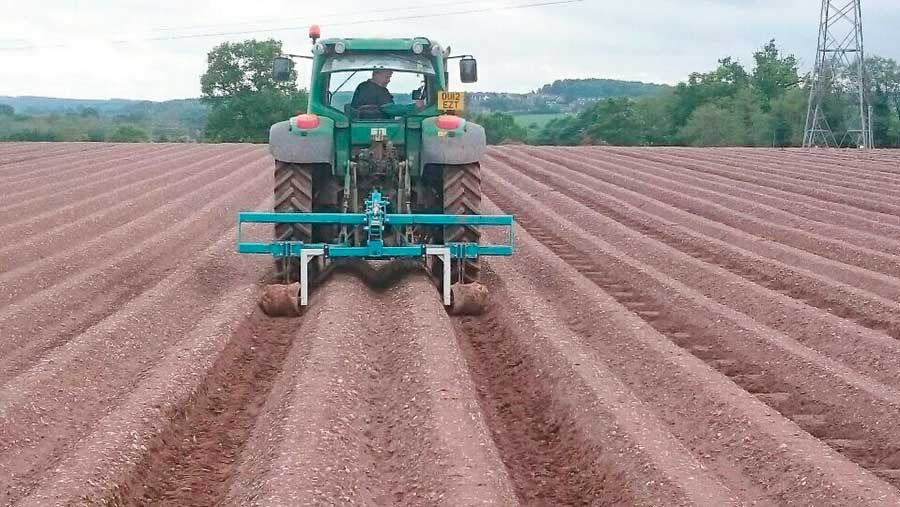 Bumps in the row

However, Elveden farm manager Andrew Francis said there was a difference in operator comfort when using machinery in the tramlines, with the bumps left by the Tied Ridger described as “horrendous”.

The ridges were put in on 13 April, two days after the crop of Russet Burbanks were planted, and then readings were taken from the 30m plots six times through the season.

There was also a significant difference between boom irrigation and rain gun irrigation on the amount of soil lost on the sandy land, with boom irrigation increasing total soil loss by 43% compared with the rain gun.

Mr Bramham-Jones and Ms Niziolomski warn growers that run-off can occur even on fields with gentle slopes, with the trial area showing sediment losses despite the field having an average gradient of just 4%. 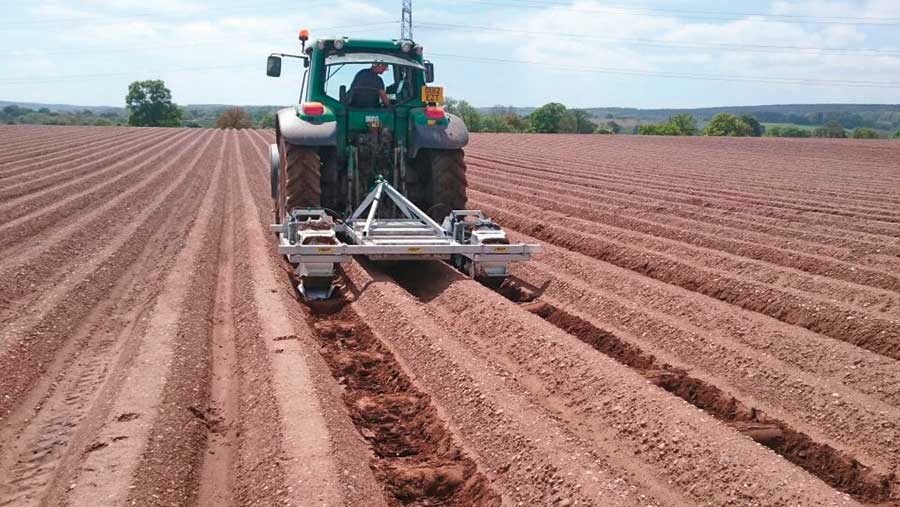 The research was part of a number of trials conducted this season on the SPot farm, alongside work on common scab, nitrogen use, herbicide trials and manipulating tuber numbers.

The AHDB is looking for one more regional farm in the north of the country, with expressions of interest sought from any potato grower between the East Midlands, north Lincolnshire and the Scottish Borders.

This would complement their existing SPot farm network in the South West, East, Shropshire and Scotland. Anyone interested should contact Graham Bannister, the knowledge exchange manager for the region on graham.bannister@ahdb.org.uk or by calling 07580 704 673.

Why is reducing water and soil loss in potato fields important?

Heavily cultivated potato fields are often ideal candidates for compaction as the soil is worked up into a fine tilth, destroying its structure, before being rolled by heavy machinery.

Mr Bramham-Jones and Ms Niziolomski explain there are five places in the soil profile where compaction can potentially occur which will reduce the ability of water to penetrate the ground:

Minimising losses will have a positive effect on the bottom line, as it may reduce the amount of expensive irrigation needed, and preserve vital topsoil and nutrients for future crops, but the benefits don’t stop there.

The research comes at a critical time for potato growers, who are coming under increasing scrutiny from the government and water companies to minimise their water use and avoid any environmental pollution.

Even as the results were being presented, the government was launching its 25-year environment plan, which gives full-throated support to fresh changes in the law designed to reduce water pollution from agriculture.

New rules will come into force on 2 April this year, requiring growers to identify and manage risks to water on their land and take precautions to reduce ammonia emissions.