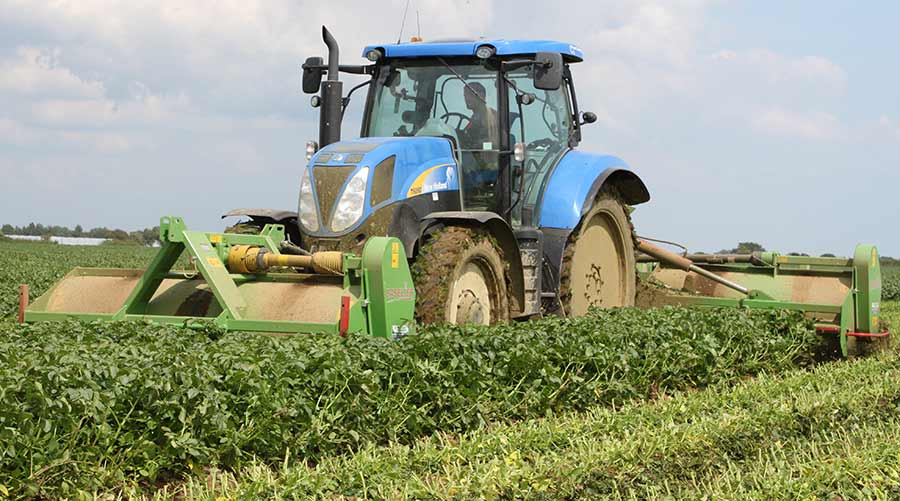 Mechanically flailing potato haulms to remove the majority of the biomass not only slows down tuber bulking, it can also speed up the desiccation process by as much as 25%.

This makes it a key tool within a potato grower’s depleted armoury for next season, after the use-up period for broad-spectrum herbicide diquat – the mainstay product for desiccation – ends in February 2020.

Although some growers are already achieving successful desiccation by flailing alone, most are likely to follow up with a sequence of PPO inhibitor herbicides, the only chemistry still available, to achieve complete burn down.

See also: Potato haulm toppers: What are the options?

As both Gozai (pyraflufen-ethyl) and Spotlight Plus (carfentrazone-ethyl) are contact herbicides, selecting the right machine to suit the field conditions and the right topping technique will be vital to preparing the crop correctly for spraying.

Watch the full video report below

Poor machine maintenance will also negatively affect the performance of the herbicide programme.

“Flailing is a very important tool for the future,” says David Peach, technical account manager at Belchim, which manufactures Gozai.

“It helps achieve reliable haulm kill, a predictable harvest date, good stolen detachment, tuber quality and aiding harvest, which are all the things that growers need from desiccation.”

Of the factors affecting desiccation – geographic area, soil type, variety, nutrition, light intensity, weather, temperature, application and flailing – flailing is one of the few elements that growers have complete control over.

Successful flailing should cut the stem to leave a decent target for the sprayer of about 15cm, while also directing the chopped haulm away from the stem to lie in between the potato ridges, using a series of deflectors. 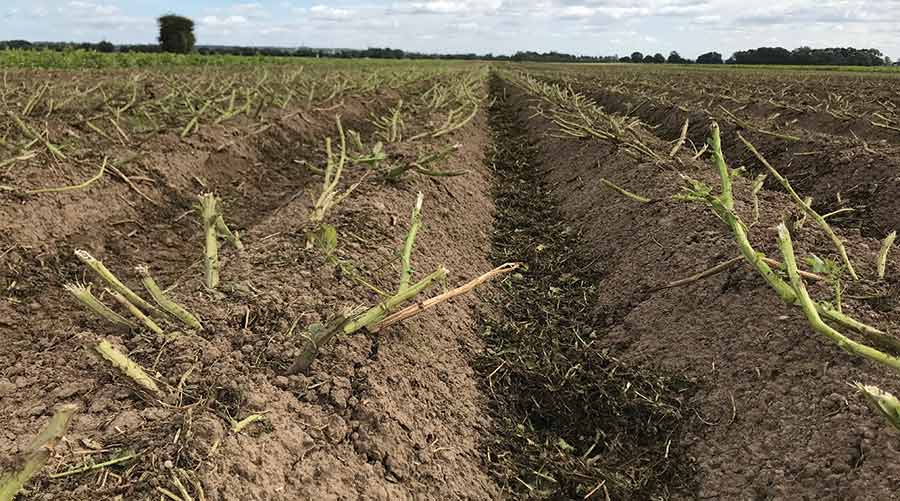 Too much chopped haulm settled on the top of the ridges or on the stems themselves will act as a barrier to the contact herbicides, and will significantly reduce their effectiveness.

“Ensure flails are in good condition and set to the right height,” says FMC’s agronomy manager Jeff Fieldsend. That’s because worn flails deposit the most material on stems.

“It is possible to achieve good results by leaving less stem, but stems shaved too close to the ridge are a real problem.”

Lodged crops and flailing at an inappropriate speed to the size of the haulm will make it difficult to leave the right amount of stem.

While laying crops will make it more difficult to produce a consistent cut across the field, the suction created by the flails, which rotate at about 1,000rpm on the Scotts Trinity 6000 machines, will lift the tops up and into the path of the flails.

Derek Scott, managing director of Scotts Precision Manufacturing, one of the four topper manufacturers available to UK growers, agrees that the condition of the flails is the most important element for leaving a crop ready for spraying.

“We see a lot of flailers that just carry on to the end of the season even though one of the flails needs replacing,” he says.

“Flails should last between 400-600ha, but it all depends on the soil type and its sand content. Ours cost between £10 and £11 to replace.

“You should be seeing a clean job, with no leaves left on stalks and a good clean cut,” he says.

Although worn flails will leave a poor result in any crop, where lack of maintenance will really tell is in a crop that has started to lodge.

“If the tops are lying down, the flails are getting worn and the topper is going in the wrong direction across the crop then you are going to do a bad job,” says Mr Scott.

Although growers will be looking for nice clean stems after flailing, Mr Scott warns that even with the machine in good order, just after the topper has passed through the crop, they can expect to see a lot of haulm debris stuck to the stems.

This will improve with time, he reassures, so growers should aim to leave at least 24-48 hours between topping and going in with their first spray of either Gozai or Spotlight Plus.

“We have experimented a lot and just after the job is done it looks the worst.

“The stems will be pressed down, and the mulch sticks to the stem, but after a few hours the stem will pop back upright and the mulch will have dried and dropped off, leaving a good target for the sprayer.”