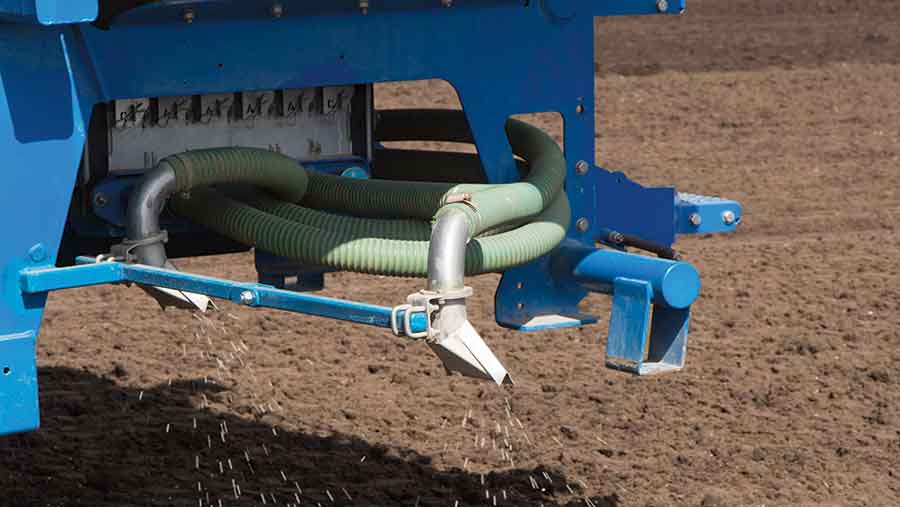 Somerset potato grower Ollie Blackburn is cutting his nitrogen application by 30kg/ha next season on his potatoes after an on-farm trial pinpointed the ideal application for maximising yields while minimising waste.

Some 80ha of potatoes is grown in a one-in-six rotation for the fresh packing market on the 1,000ha Dillington Farms, a mixed dairy enterprise with combinable and forage crops near Ilminster. It is also the AHDB’s SPot south-west farm.

Last season, Mr Blackburn, assistant farm manager, applied 120kg/ha of nitrogen to his crop of potatoes grown for this market, up from 100kg/ha the year before.

However, next season he plans to cut this to just 90kg/ha after it came top in a trial, providing the best balance between saleable yield and high dry matter content needed for good eating quality.

The effect of nitrogen was trialled by applying different rates – 90kg/ha, 120kg/ha and 150kg/ha – in three square blocks to a field that had been cultivated consistently.

A base of 90kg/ha was applied as liquid nitrogen on 18 April before planting and incorporated across the three trial blocks.

Although the balance of the medium and high doses were meant to be applied as a top dressing before emergence, this was delayed until after emergence due to hot conditions and mechanical issues with the sprayer.

The trial revealed that added nitrogen does not result in a bigger and better crop. 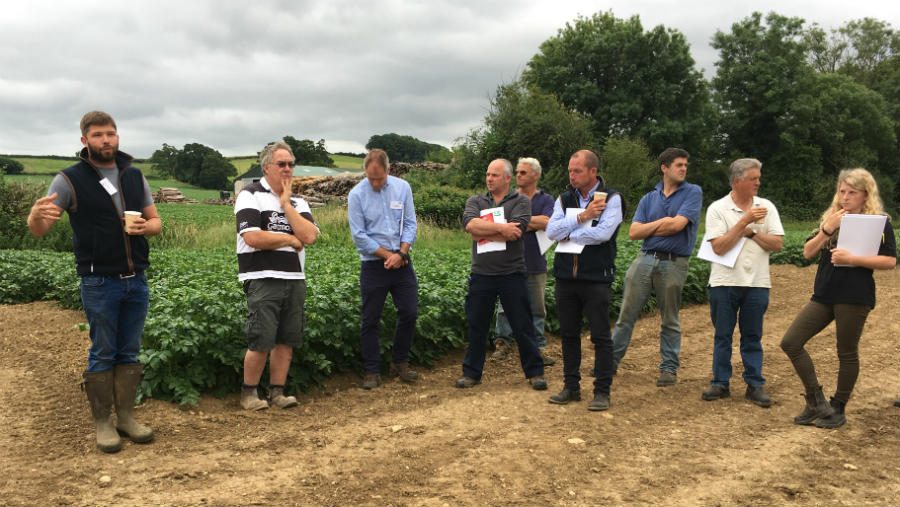 While the 150kg/ha N application did result in a marginally higher overall yield, a much higher proportion of this – 1.1t/ha compared with 0.8t/ha for 120kg/ha – was for tubers under 40mm in size.

These higher-fertilised crops also had more stems per plant, meaning the plants used the extra fertiliser to create secondary stems under the ground, on which lots of smaller tubers formed.

The crops that received only 90kg/ha were expected to start senescence before the other blocks due to the quantity of nitrogen being inadequate to maintain the canopy for the full season, but this was not the case.

In fact, these plants yielded only slightly less overall than those that received the highest nitrogen, but importantly for packing potatoes, had the highest dry matter content – 17.1% compared with 16.3% and 16.4% for the 120kg/ha and 150kg/ha blocks, respectively.

Another benefit of the lower N dose was an earlier skin set. This had occurred by 27 September, a week earlier than for the middle-rate group and two weeks before the high-rate group.

Achieving an earlier skin set without losing quality was the key attribute for Mr Blackburn, meaning the terribly wet soil conditions experienced in mid-October this year could be avoided with a more timely harvest in September.

“The skin set test proved what we expected about the effect of higher nitrogen on when skin set occurs – that higher rates delays it – but it is nice to have it properly quantified in a trial,” he said.

In conclusion, the trail shows the dry matter content across the three groups is essentially the same, it has just been diluted across a bigger yield for the two higher doses.

While Electra is not directly translatable to other varieties, the trial demonstrates principles, says potato researcher Mark Stalham of Niab CUF.

“A lot of growers are using too much fertiliser,” he says.

The trial will hopefully be repeated next season at Dillington using a lower range of nitrogen rates to reveal the full trend for nitrogen on the crop.

What would have been interesting, says Dr Stalham, is to have seen the effect on dry matter of the lower 60kg/ha rate. “That wouldn’t have got to the full season.”

The nitrogen trial carried out at the AHDB’s Spot South West farm in collaboration with Mark Stalham of Niab CUF used the maincrop variety Electra.

Electra makes up half of Dillington’s potato crop each year, alongside Melody, Lanorma and Georgia.

It is grown almost exclusively in the South West for the packing market due to its resistance to scab, and the fact it doesn’t bruise easily.

“We really enjoy growing Electra – it gives a good crop and yields well. We are just trying to boost the eating quality so it keeps meeting consumer demands,” says Ollie Blackburn.