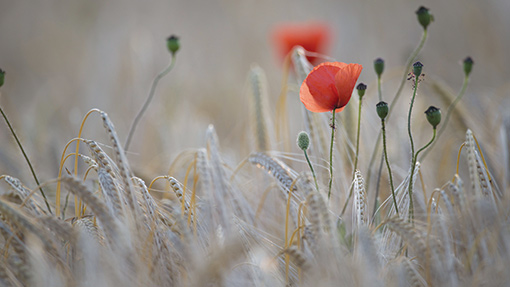 Resistant poppy populations are becoming more prevalent, so this year’s spring weed herbicide programme will be vital in keeping numbers down.

Poppies are among a growing number of broadleaved weeds showing signs of resistance to some commonly used sulfonylurea herbicides such as Unite and Atlantis.

Experts are advising growers to plan careful and apply herbicides at their T0 and T1 fungicide timings to stay on top of weeds and prevent another blackgrass scenario.

Dow AgroSciences cereal herbicide specialist Stuart Jackson advises growers to control weeds as early as possible and before that T1 timing, particularly with competitive weeds and ones with high seed returns.

“If you let them get out of hand, they can have a huge effect on yield because you get so much competition and it affects the tillers,” he explained.

Lynn Tatnell, a weed biologist at ADAS, who is heavily involved in research looking into resistance in broadleaved weeds, believes it is vital growers know the problem they could face.

“Stopping what has happened with blackgrass in broadleaved weeds will be crucial. The loss of herbicides minimises choices and means that an integrated management system is vital for preventing a wide-scale increase,” she says.

Common poppies have become an increasing concern in winter crops due to their large seed bank and their ability to produce high numbers of seeds that will germinate over a wide period of time.

In recent years they have become particularly prevalent in the east of the UK, where much of the cereal crops are grown. Further west and into the north, including Scotland, resistant mayweed and chickweed populations are also being seen and should be the main focus.

“The amount of spring barley in Scotland means they are more susceptible to the threat,” says Mrs Tatnell.

The target-site resistance seen in broadleaved weeds does mean alternative herbicides are still effective on resistant populations as they act on different target sites.

“There are still herbicides that are effective but growers will need to use them wisely to keep their efficacy,” says Mrs Tatnell.

Eileen Paterson, principal biologist at Dow AgroSciences, told a recent Dow briefing these will provide the basis for many growers in resistant-weed scenarios.

“There are going to be varying broadleaved weed pressures largely depending on drill dates and residual applications. In the later-drilled crops that have had little or no residual there will be more broadleaved weeds, so controlling these will be important,” she said.

What is target-site resistance?

Mrs Paterson suggested growers that have not been used to controlling blackgrass may have a bigger issue with broadleaved weeds due to less residual herbicides being applied.

Poppies are the highest-risk broadleaved weed species to have resistance, and where it has been seen, she recommended the florasulam-based Spitfire at 1 litre/ha plus an adjuvant.

Resistant chickweed may be controlled with 0.75 litres/ha Spitfire or 0.75 litres/ha of Galaxy or Dakota. This can also be used on mayweed at a slightly higher rate of 1 litre/ha.

Mr Jackson reminds growers they are limited in the amount of SU applications in each crop and the autumn applications will help dictate what they are able to spray now.

“Growers can, however, split their florasulam applications, allowing them to follow up an autumn application of Unite with Spitfire and then Galaxy or Dakota,” he says.

Mrs Tatnell suggests that if applications have been made in suboptimal conditions, this may account for past problems with broadleaved weeds.

“Factors such as soil moisture before spraying, rainfall, seed-bed quality and weed populations can all cause variations in weed control,” she says.

“Rotation of the crop, chemistry used and cultivation will all help in suppressing broadleaved weed problems,” she says.