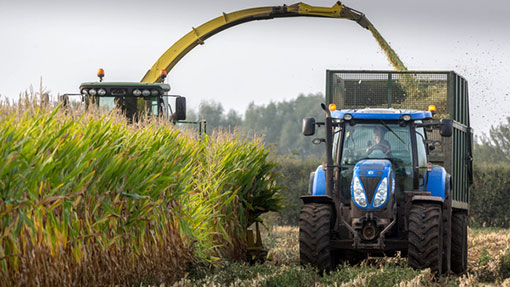 There is a growing case for applying an insurance foliar fungicide spray to maize crops to protect them from yield-sapping diseases that are on the rise in the UK.

The focus for crop protection in forage maize crops has typically been on herbicides, as the crop is particularly sensitive to early weed competition.

However, its increased popularity as a livestock feed and the advent of the anaerobic digestion (AD) industry has increased its area and geographical spread, piling on the disease pressure explains NIAB plant pathologist Jane Thomas.

“Disease in maize was relatively insignificant until 1998, when we saw a rapid increase that coincided with the first spike in the total maize area, which continues to grow,” she says.

With this increased pressure, she believes there could be an economic case for growers to routinely spray to give insurance against the two biggest foliar diseases, eyespot and the less common northern corn leaf blight.

Eyespot favours mild, wet conditions through June and July and leaf blight is better suited to hot and moist seasons, which is why it is less prevalent in the UK at present.

“Both diseases can cause significant yield losses and although some varieties have good partial resistance, it cannot be relied upon in a bad year,” she adds.

Although the disease can be seen anywhere in the UK, the wetter areas such as the South West see it more frequently and rain splash can spread the disease from initial foci to destroy a crop in six to seven days.

“It can infect the crop in early June when the crop would usually have six to eight leaves, but it causes more damage when it comes in late to take out the top leaves, which contribute most to yield,” explains Mr Draper.

His treatment advice in the past has been based on seasonal conditions and in high risk situations, apply a fungicide as late as possible to ensure that the product’s persistence protects those top leaves. 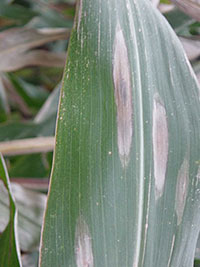 However, he points out that another rule of thumb has been not to treat if there has been a hot dry spell, which usually stops eyespot in its tracks.

“That said, do you want to take the risk? It’s about insuring your crop and it’s expensive for livestock farmers or AD plants to buy in feedstock to replace any yield lost to an eyespot epidemic.

“That brings you back to a more prophylactic approach, applying a fungicide at the 10-12 leaf stage, which high ground clearance sprayers can cover, but be prepared to do some damage to the crop,” says Mr Draper.

With flusilazole now revoked and only Comet and Opera from BASF available on extensions of authorisation for minor use (EAMUs), it’s the only fully approved maize fungicide in the UK. 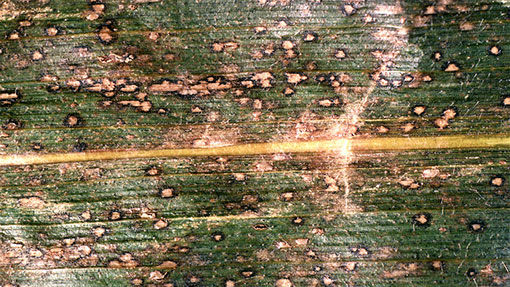 Eyespot is identified as small, circular lesions with brown centres surrounded by a purple/black border. This is circled by a yellow halo, which can be seen easily by holding the leaf up to sunlight.

Containing azoxystrobin and propiconazole, it has good activity on eyespot and leaf blight and can be applied once a crop at 1l/ha, from stem elongation to the end of flowering.

NIAB eyespot-inoculated trials have indicated the product can give a 2t/ha freshweight and 15% dry matter yield increase over untreated plots.

Syngenta field technical manager Simon Roberts agrees the best results are achieved when the product is applied as late as possible to minimise the risk of late infection, with Quilt Excel persisting for four to six weeks.

“Using angled flat fan nozzles such as the Defy, facing forwards and backwards to will improve product coverage and a water rate of 200l would be sufficient,” adds Mr Roberts.