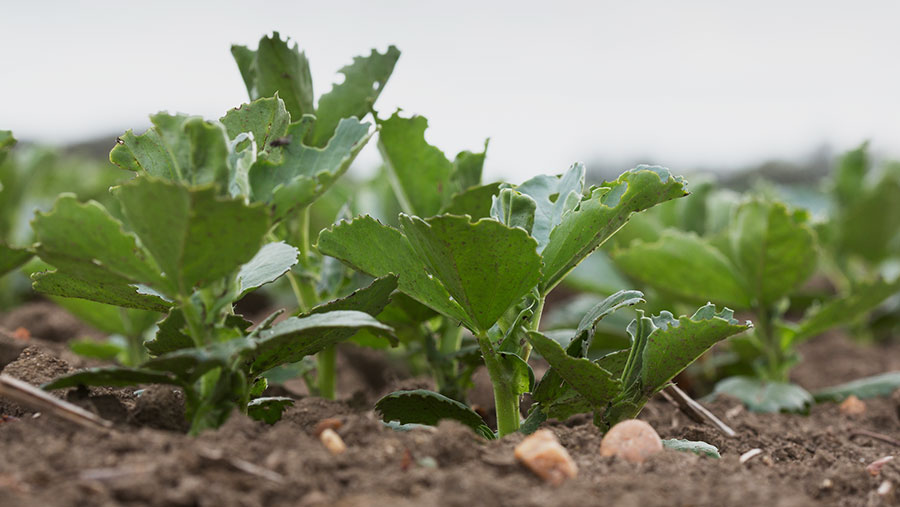 UK bean farmers are being advised to focus on growing for animal feed rather than human consumption this season if experiencing bruchid beetle damage, especially after a successful high-quality Australian crop.

Bruchid damage is increasing on crops south of the River Humber, making beans unsuitable for human use, while the bumper Australian crop is supplying most of the beans for the world’s biggest importer, Egypt.

Andrew Bury, UK pulse manager at agronomy and trading group Frontier, says all is not lost for UK bean growers for this season, and suggests many would be better placed to focus on the feed market.

“Although, for this year, there is pressure on the human consumption market, there is still a strong market for feed beans,” he tells Farmers Weekly.

He suggests bean growers north of the Humber may be able to harvest the quality needed for human use, but others further south may be better advised to aim for the animal feed market.

With feed bean prices indicated for harvest 2021 at £200/t, it may not be worth some growers applying several insecticides to control bruchid for just a £20/t human consumption premium.

This human-use market is dominated by Egypt, where they are used to make falafel, and this market demands quality beans with little pest damage from bruchid beetles.

For the fish food market, aimed at the Scottish and Norwegian salmon industry, Frontier offers contracts at a premium of £30/t over feed wheat futures, and currently has 100-plus growers using this contract.

Beans are processed at the group’s £3.5m Ruddington plant, which opened in 2019 just south of Nottingham, with an annual capacity of 50,000t, or nearly 10% of the bean crop.

This dehulling plant removes the skins of beans, which are then used primarily as a binding agent and protein source for the salmon industry, which consumes an overall 1.3m tonnes of feed annually.

Spring beans make up about three-quarters of the total bean area, and traders believe most of this small rise in the forecast bean area will come from the spring-sown crop.

This rise is likely to be driven by a desire from compounders for more home-grown protein crops to replace soya bean imports, while some growers are looking for an alternative break crop to oilseed rape.

Britain imports more than 3m tonnes of soya each year – 1m tonnes of beans and 2m tonnes of meal – while the oilseed rape area this season is forecast to have fallen to 318,000ha from the peak of 756,00ha at the 2012 harvest.

Andrew Bury was speaking at a “Pulse Roadshow 2021” held earlier this month by the Processors and Growers Research Organisation (PGRO) and Syngenta.