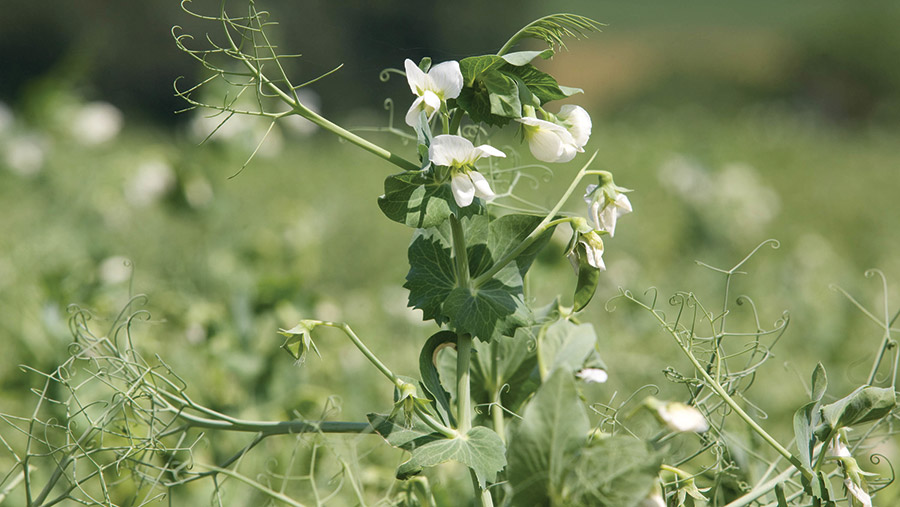 Pulse growers will be able to drill a new high-yielding pea variety and an early spring bean with good disease resistance in coming seasons, after both were added to the Pulse Recommended Lists for 2020 (PDF).

The white pea variety Kameleon, from breeder Senova, is said to give an “exceptional” yield of 114%, outyielding its nearest pea variety rival, the large blue Kactus, by 7%.

It was one of seven new pea varieties added the Processors and Growers Research Organisation’s (PRGO) Recommended Lists for 2020, and is relatively early maturing, stands reasonably well but is slightly weak on downy mildew resistance.

See also: 5 pea and bean pests for growers to look out for

Although seven varieties are recommended, there is likely to be very little seed of these new varieties available for 2020, and growers are more likely to have to wait until 2021.

Stephen Belcher, principal technical officer at the PRGO, told a briefing: “Kameleon shows a massive yield compared with other varieties.”

He added that the highlight of the four new spring bean varieties making the list was Yukon, which although giving a modest yield of 92% compared with top spring bean yielder Lynx at 102%, is early to mature and has good resistance to downy mildew.

The variety from LSPB is the earliest to mature on the new list with a score of 9 and the top score for downy mildew resistance at 8, in a 1-9 scale, where a high figure indicates varieties showing the character to a high degree.

He points out that downy mildew was a problem in spring beans in 2019, and is likely to become more important with the fungicide metalaxyl, used to control the disease, under threat from regulators.