Harvest continues to be blighted by heavy showers, with milling quality starting to slip in some areas and reports emerging of pre-harvest sprouting. But with better weather forecast, rapid progress could be made over the coming week.

Masstock agronomist David Neale said quality of some wheat was starting to suffer in the rain. “It is very concerning – some wheat is going grey and I should think that quality is on the move. But until we get the crop off after the rain, we won’t know.” Wheat harvest was about 30-35% complete, ranging from finished to not yet started, he said.

Harvest was going very slowly in Shropshire and the west Midlands, with 30% of the wheat cut so far, said Julian Walker at Shropshire Grain. However, crops were only just ripe, so were not at risk of losing Hagbergs yet, and yields were slightly better than average.

“It’s not coming to any harm yet – and the forecast is good for the weekend. It could be a different picture next week.” Farmers had cut milling wheat first, and quality was extremely good, he added. “All the milling wheat is making the grade – protein contents are generally higher than usual. And there are some exceptional feed wheats with good bushelweights.”

Camgrain members had cut 95% of their Group 1 and 2 milling wheats, but 50,000t of Group 3 and 4 wheats were left to cut, said store manager Philip Darke. “Everything so far has got good Hagbergs, but what is left out there is at serious risk.” Protein contents and yields were extremely variable, depending on soil type and rainfall in the spring, but were 10% down across East Anglia.

In Scotland, harvest was looking worryingly similar to last year’s washout – but quality remained solid and better prices were keeping farmers’ spirits up, said independent agronomist Allen Scobie. All the winter barley and most of the rape was now cut in the Dundee area. “Some people have started spring barley and the odd bit of wheat.

“The quality is quite good – the spring barley is only just ready so it’s not an issue yet,” he said. “I haven’t seen any wheat sprouting yet – but I wouldn’t like to see this rain go on for a week or 10 days more. With combine capacities so much greater than they used to be there is no impending disaster at the moment.”

Harvest progress was ahead of last year at Sentry Farming, covering from Scotland to Dorset and much of East Anglia. As of 20 August, harvest was 54% complete, compared with 50% the same date last year. Milling wheat progress was behind last year, at 60% cut, but pea and spring barley were ahead.

“Yields on most crops are down across the board – peas are the only crop that are yielding better than budgeted,” said John Barrett at Sentry Farming in Norfolk. However, wheat yields in Norfolk were slightly better than last year. “We are on some particularly heavy land here – anything that’s not on heavy bodied soil is down.”

Several cases of pre-harvest sprouting in winter wheat have been reported by NIAB TAG, affecting a number of varieties.

NIAB TAG consultant David Parish advised growers to prioritise harvesting. “Bring in the milling and quality wheat first and concentrate on those varieties that are susceptible to pre-harvest sprouting.” 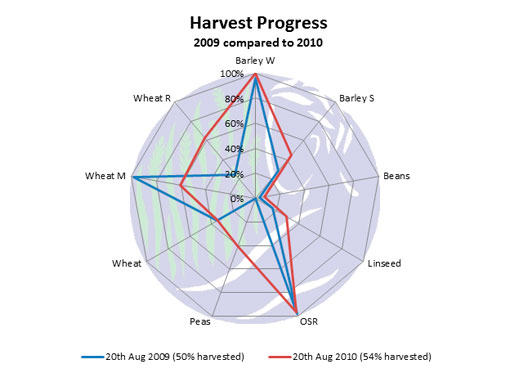