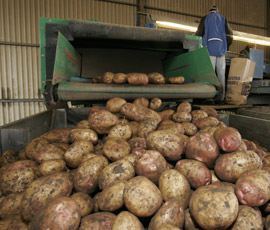 Cereals are all in the shed at Hundreds Farm, Crowland, Lincolnshire, leaving Mark Woodroff with just the potato harvest to finish.

“We’ve got 20ha of potatoes picked already and it’s going reasonably well,” he said. “It was too dry and we considered irrigating but now we’ve had some rain we’re going to get going again.”

Although the wet weather was improving lifting conditions, Mr Woodroff reckoned there would be a lot of wastage from the crop.

“There are a lot of green and cracked potatoes, which goes quite far down. North Norfolk and Yorkshire have had more rain – I think we’ve come off pretty well.”

Mr Woodroff hoped the lucrative potato prices would cushion his yield loss, but could not say the same for the cereal harvest, much of which had been sold forward at lower prices.

“We sold forward on the basis of 10t/ha yields and we’ve probably only done 7.5t/ha,” he said.

“We probably should have held back, but instead we sold a bigger percentage. Hindsight is a wonderful thing.”

With Oakley’s bushel weight down into the fifties and yields down across the board, Mr Woodroff put much of his crop losses down to the lack of sun. “The crops just didn’t photosynthesise.”

In a bid to combat his black grass problem, Mr Woodroff grew Camelina for the second year as an alternative break crop, with pleasing results.

“It’s done about 1.25t/ha this year,” he said. “It’s a good break crop and was easier to cut this year. Chemistry for black grass hasn’t worked on some fields so it’s a good alternative crop instead of maize.”