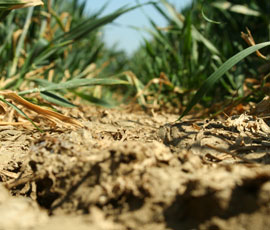 Rain is desperately needed to save later drilled wheat crops and those on light or shallower soils from a significant loss in yield potential, agronomists in the south and east of England say.

But early-drilled crops on deeper soils are coping well despite many areas having little appreciable rain since early March.

The warm Easter weekend had only exacerbated the stress many crops were facing through poor nitrogen uptake caused by the dry weather, Brian Keen, an AICC agronomist advising on crops mostly in the Cotswolds, said on Tuesday (26 April).

Winter cereals were losing tillers as a result on the lighter brash soils in the region, he said, while in oilseed rape, pod set was poor and crops were starting to wilt.

“Yield potential in cereals is slipping away fast – 30% could have gone by the end of the week if it hasn’t rained.”

“It is causing problems in what to advise growers and how much to spend on wheat crops. We were of the opinion to look after crops this season because of the grain price, but we’re having to re-assess.”

Lower-cost T1 fungicide options were now likely to be applied, but rain could quickly change the picture, he stressed.

On heavier soils in Buckinghamshire, Oxfordshire and Berkshire, crops were bearing up well, said Andrew Cotton, an AICC agronomist in the area. “There is a marked difference between crops on deeper soils and those on light brash, particularly where nitrogen went on early and is in crops now. But where N was delayed, crops are not looking too happy.”

Fungicide inputs, however, were unchanged so far, he said. “We’re seeing a bit more mildew than usual and yellow rust.”

Graham Brooks, from Prime Agriculture in Essex, was also sticking to his fungicide plans for now. “The bulk of crops are still looking OK, if rain comes reasonably quickly, although they need it to keep them going. But they don’t look like they have lost anything yet.”

Early N at 60-70kg/ha had also helped keep them going for longer, he said. But later drilled crops, for example after roots, or crops on shallower soils were showing stress symptoms.

Those crops were also looking “miserable” in Norfolk, said Michael Thompson, another AICC agronomist. “It has been so hot, which has exacerbated problems. We’re now in the major phase of growth and crops are short of water and nutrients.”

His earlier drilled crops were looking well considering the weather, he added.

Growers are using the most effective products, usually containing desmedipham, more frequently, although at lower rates to try to control weeds before they harden off, he said.

Pulse growers were also struggling with important pre-emergence herbicides not working particularly well in the dry conditions. “It is a problem as there are limited post-emergence options.”

That, too, was the case for potatoes, but he was hopeful rain forecast for the end of the week would arrive in time to activate residual herbicides.