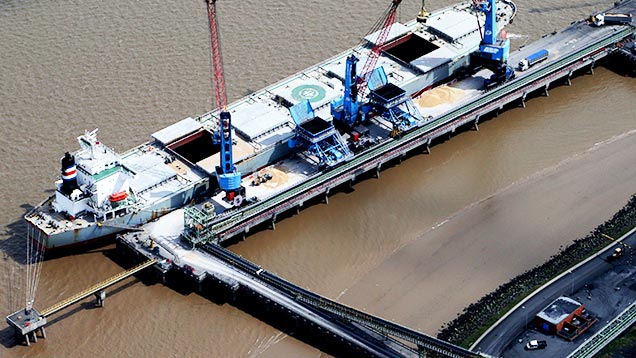 66,000t of wheat will leave the Humber soon in what is believed to be the biggest ever grain cargo from the UK.

Bound for Thailand, the consignment is being loaded for Gleadell Agriculture at Associated British Ports’ Port of Immingham.

The load is the largest for at least 30 years, with records earlier than that almost impossible to trace.

It will take up to six days to load the vessel with wheat sourced from almost 300 farms across Lincolnshire and the East Midlands.

The consignment is equivalent to 2,275 articulated lorryloads, or about 6,500ha of wheat.

Each of the two mobile quayside cranes can lift about 30t of grain in one grab. The wheat will be loaded from quayside stores and from trucks leading directly from farm.

The shipment marked a significant upturn in export activity from the UK, which has been uncompetitive with exports to Europe, the main export market, this season, said Jonathan Lane, trading director at Gleadell Agriculture.

“UK merchants have had to look further afield to sell grain and, thanks to the firmer dollar and cheaper freight rates, that grain has become more competitive, which has opened up distant markets such as Thailand.”

UK exports have picked up sharply as a result, and now feature the biggest non-EU monthly shipments since 2000.

However the UK could still carry out higher than usual stocks of wheat at the end of this season and prices were unlikely to rise in the short term, said Mr Lane.

“However, currency is another key factor in determining grain prices, and who knows what will happen to sterling’s value compared with other currencies once the outcome of the general election becomes clear,” says Mr Lane.