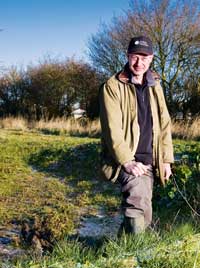 Cambridgeshire grower David Felce has introduced drainage measures that not only traps sediment, but also cuts flooding risk during the wet winter months. Philip Case went to see them in action.

The run-off can wash fertilisers, pesticides and other contaminants into watercourses and with tougher EU legislation, there is a threat that more agchemicals will be lost if detected in watercourses.

Introducing a range of physical measures on farm, such as silt traps, scrapes and barriers can help mitigate this risk.

David Felce, a LEAF demonstration farmer at Midloe Grange Farm, near St Neots, Cambridgeshire, believes every grower should be concerned about run-off – and it is not just a problem for farms with moderate to steep slopes.

To illustrate the point, he recalls the time in 2008 when he discovered a field where a slope of under two degrees was found to be collecting water after heavy rainfall.

The field already had a buffer strip, but he realised that this alone was not enough to prevent run-off flowing into nearby watercourses.

With the advice of Jamie Letts, a policy adviser for agriculture from the Environment Agency, Mr Felce creates a soil scrape using a digger to hold back water and sediment, especially following periods of heavy rainfall. 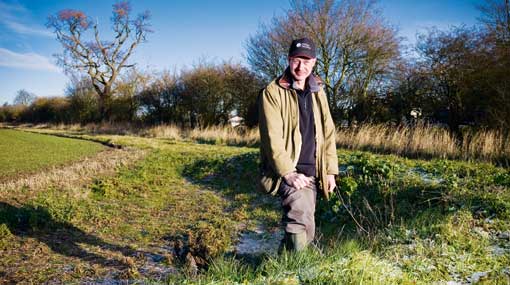 Although it is simple, the measure has proved hugely successful. “When it rained heavily in January last year, the bund was an amazing feature,” he says.

“The field was in winter wheat and the water was running down the tramlines and ending up in the corner. Rainwater filled the bund to the top and, over a day or so, it just soaked away.

“Without the bund the grass margin would not have been enough to stop the run-off accumulating in the low gateway and entering the ditch, which ultimately discharges through Little Paxton Wood, an SSSI (Site of Special Scientific Interest).”

This is one of several measures Mr Felce has adopted on his farm. Spring is good time to establish these features, he says, because the soil can be worked easily and grass can be grown within the bund, further enhancing its effect.

At Midloe, every field boundary is a ditch, although they are mainly drainage ditches rather than wet ditches, from an ELS point of view.

The soil is Hanslope series, Chalky Boulder Clay with a clay loam top soil. Most of the fields are under-drained, which Mr Felce describes as a “twin-edged sword”.

“The water drains away, but the other stuff goes with it,” he explains.

There are two main areas where the water drains – a ditch that runs out down through Little Paxton Wood and joins the river Great Ouse and a second tributary joins via the wood.

Grassland can become badly compacted, especially by livestock in the autumn and winter, and grassland fields can be just as prone to run-off as cultivated fields with the added risk of loss of faecal organisms.

At Midloe, a sediment trap was installed in a ditch open to livestock during the grazing season. The bottom of the ditch was scraped out with a digger and lined with paving stones to form a base where accumulated sediment can be removed.

The barrier at the ditch entrance is an “aquadyne”, a plastic composite made from recycled pesticide containers. The aquadyne mimics old blackthorn drains used by the Romans for draining fields. It is porous to water, but holds back sufficient flow to allow soil particles to settle out.

The small drop in the silt trap acts as a settlement tank where sediment and detritus accumulates. The trap is easily accessible for a loader and bucket to allow frequent cleaning if necessary, either mechanically or by hand.

The scrape floods to create a settlement pool and then flows on through a bund. It also acts as a semi-wetland for species such as snipe and other waders, which is great for farm biodiversity.

The silt trap is about 15cm deep and it is lined with paving stones or slabs to give it an even level. The idea is to trap sediment in single locations that are easily accessible to clean out with a shovel. It slows the river flow and allows soil particles and attached nutrients or pesticides to settle out.

At Midloe, a trap has been created at the bottom of a ditch, which acts like a mini waterfall. The water flows down the ditch, plunges onto tiles and over the silt trap into an aquadyne, which is used as a filter to stop sediment flowing from the ditch into the river.

First, identify a corner of the grass margin where run-off is accumulating. This corner is excavated and that spoil is used to build up a bank. The area within the bund should ideally be grassed to allow as much water as possible to flow in and create a settlement pool and diverse habitat, which could be retained as a micro-wetland feature.

During periods of heavy rainfall, water flows down the tramlines and into the bund, which stops it escaping the field. The scrape holds back muddy water and retains a number of diffuse pollutants at the field corner. Ideally, the water in the scrape should slowly drain over 24 hours to be ready for the next spell of rain.

• Total cost – Hire of digger and compaction of scrape walls £200.

Farm tracks are renowned carriers of water during rainfall. They can also act as temporary carriers of field run-off, damaging tracks and allowing potential pollutants to access the main river. Constructing a French drain, a gully filled to the top with aggregates, usually gravel, is a simple exercise that helps divert this flow of water for retention and slow percolation.

At Midloe, Mr Felce hand-dug a French drain on the other side of the arable field buffer. The drain intercepts the flow of water from the field boundary track and diverts it into the ditch, which flows into the river at Paxton Wood.

The in-ditch barrier aims to slow and hold the flow of water. This has two purposes: to allow soil particles to settle out and to hold back water in the drainage network to reduce peak flows into the main river.

At Midloe, an in-ditch barrier has been created in a freshly excavated ditch which has collected a considerable amount of sediment over the years. Construction was made using a mixture of farm materials, including fencing stakes and willow from coppicing.

Stumps of felled trees act as an anchor for the barrier. The barrier has gaps that allow normal water flow, but it can hold back the force and flow during heavy rainfall periods. Even during normal flow, the speed of flow is reduced to allow sedimentation.

A variation to the ditch barrier has been created at Midloe using felled willow growing beside the ditch network. A log sluice was created on the moat to allow sediment to settle, stopping it from drifting downstream. The intention is to increase the filtration by planting the section with common reeds.

*Work that restricts water flow may require a licence from the Environment Agency.

These measures at Midloe Grange Farm are part of a wider project being carried out by the Environment Agency with LEAF testing new on-farm practices that intercept run-off from fields.

SuDS intercept the pathway of run-off by using physical barriers, such as ponds, scrapes and vegetation. They can easily be introduced on farm and their construction costs are relatively low, up to £250, depending on the site, according to LEAF project co-ordinator Camilla Puzey.

Currently, none of the measures offer specific points towards environmental stewardship schemes, such as Entry Level Stewardship. But introducing the options on farm can contribute towards measures in the Campaign for the Farmed Environment and poject leaders hope they will be introduced in Higher Level Stewardship and Welsh Glastir schemes in the future.