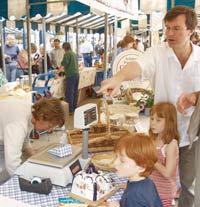 Latest research from food and grocery expert IGD found sales in local, British and high-welfare food has continued to grow.

The number of people buying locally-produced food had almost doubled in the past three years from 15-27%, the survey of 1051 shoppers found.

Meanwhile almost a quarter of shoppers said country of origin was important, compared with just 16% in 2006, while one-fifth (20%) of those questioned said they were concerned about food miles.

Knowing about the standards of animal welfare had also increased to one-fifth (20%) from 10% in 2006.

Almost half (46%) of respondents also mentioned animal living conditions when asked about concerns they have relating to food production, compared with 30% in 2006.

Organic food was the one area to be hit by the credit crunch, with the number of people buying it dropping from almost a quarter to 19% in 2008.

Joanne Denney-Finch, IGC chief executive, said consumers were looking at their food options in light of the economic conditions, but were not about to abandon their tastes and beliefs.

“While becoming increasingly price sensitive in these challenging times, shoppers are not leaving their ethical concerns at home when they go food shopping,” she said.

“The aspiration for high quality, more sustainable food remains. But people are scrutinising closely to get the best value for their money.

“Only organic seems to have suffered a small decline. We believe this is partly due to a swing towards other ethical options, and it is mainly among more casual organic shoppers.