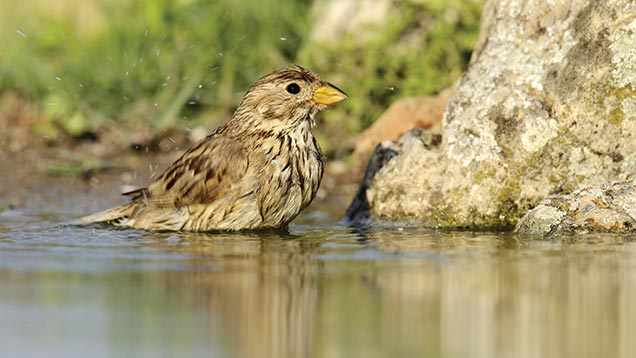 A monthly look at how growers can help key wildlife species.

Status: The corn bunting is found throughout lowland England and Scotland, although it is absent from Wales and Northern Ireland. It is very much a bird associated with farmland, in particular open landscapes that include lots of arable land. Wiltshire contains the highest corn bunting population in this country. Along with a number of other species associated with farmland, its numbers have been in decline, however, where farmers provide year-round habitat for them, they respond well.

They are the size of a rather overweight, dumpy sparrow with a streaky brown breast and a bib on the chest. They have a big, powerful bill that is used for eating large seeds and corn. One of its country names is the “barley bird” due to the fact that it likes to eat barley as soon as it starts to ripen in the fields.

One of the easiest ways to identify the species is in the spring and summer when the male will sit on a convenient song post and give off a sound a little like jangling keys – over and over again.

Habitat: Corn bunting do not like trees (because predators sit in them) and tend to be found in wide open parts with not much more than scrubby areas and low hedges. In winter they form flocks with other buntings and finches and forage on weedy stubbles, wild bird seed mixes and also around outdoor stock feeding areas. They are extremely sedentary – although they will move to good feeding spots in winter, they tend to stick fairly close to their natal site.

In fact, the corn bunting are so sedentary that individuals that are only 30km part can sing in a slightly different dialect – a bit like our own county accents. Having said that – there are always exceptions, such as the individual that was ringed on Chetney Marsh in Kent in 1963 and was found later that same year dead in Brebieres, Northern France, some 200 km away – a long way for a corn bunting to travel.

Tips to help corn bunting: During the winter months, corn bunting need a good supply of grain and seeds to feed on, so wild bird seed mixes and weedy stubbles are ideal. Game cover crops, especially if they have pheasant hoppers within them, will also be used by the birds and now that we have supplementary feeding as a stewardship option, scattering seed along tracks can give these birds a helping hand through the difficult period of January to early May.

Corn bunting nest very late – not laying eggs until May – so if they are to have more than one successful brood, ideally they need either areas of rough grass or blocks of unharvested cereals out in the middle of fields, left specifically for them and paid for by the stewardship scheme. If these same blocks are left unharvested during winter too, they can become one big bird table for these buntings.

A final thought: You should always be a somewhat suspicious of a drab, little brown job of a bird – why is it so unobtrusive? Well, the male can apparently have up to 18 different females in a season, that’s why!