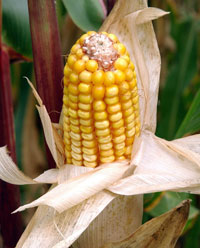 An agronomist has been accused of sabotaging Wales’ GM-free status (pdf) by secretly planting and harvesting genetically modified maize.

Jonathan Harrington, an agronomist from Tregoyd near Hay-on-Wye, has imported two varieties of GM maize from Spain, which he has planted on his farmland.

He has also given seed to two other farmers who have planted the crops and fed the maize to sheep and cattle in the area.

Mr Harrington said he resorted to secret planting after the Welsh Assembly refused to discuss its no-GM policy.

The varieties he chose were on the EU common variety list, which are legal to grow anywhere in Europe.

The Welsh Assembly admitted that despite its policy towards GM cops, it has no legal power to ban them in Wales.

But it said the introduction of GM crops could “undermine future ambitions” for Welsh agriculture.

“Our policy is to take a precautionary and restrictive GM crop policy stance which is in line with our commitment to sustainable agriculture.

“We believe it has broad public support and reflects the Welsh Assembly government’s legal duty to act responsibly within the UK and EU legislation.”

Richard Jacobs, OFG chief executive, said: “If this man really has done what he says, it’s an appalling and irresponsible act.

“Whatever the arguments for and against GM crops, there are good reasons why they are not currently approved for use outside of test environments, not least of which is the risk of cross-contamination to surrounding land.

“If organic farms are near these sites they could find there is GM in their produce and they will not be able to sell it as organic and thereby receive the premium they would be banking on. That could hit people really hard, putting entire livelihoods at risk. Who is going to compensate them for that?

“To unilaterally defy the will of the Welsh Assembly is extremely selfish. It really would be hard to see such behaviour as anything other than an act of vandalism.”