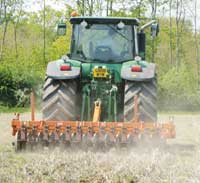 We all know that replacing the wearing parts on cultivations kit can be expensive. But one big farming company has worked out exactly what it does cost.

Wearing parts may be hidden from view in the field but they’re under intense scrutiny at Sentry Farms in Suffolk.

Manager Ken McTaggart is looking closely for ways to make savings. His wearing part cost of £14/ha puts him in the bottom league of Sentry-managed farms, with the top performers averaging £5.20/ha.

He admits to to being a heavy metal user but points out that there are some genuine reasons for the higher bill. “We plough around 30% of the land, we have a more varied rotation than many of the other farms, including root crops, and we are farming some abrasive soil types.

“Machinery type can also make a big difference, as can a dry summer. We’re learning all the time.”

Mr McTaggart is in charge of a 1500ha arable business, contract farming six units within a 30-mile radius of Ipswich from his base at Home Farm, East Bergholt. The land varies from very light sands through to heavy boulder clays, requiring two different rotations.

“We have some irrigation on the lighter land, so we grow potatoes, onions and sugar beet there, as well as cereals. On the heavy land, the rotation is based on two wheats and oilseed rape, with winter beans replacing the rape where pigeons are bad.”

Cultivations vary with soil type and crop. For cereal establishment, a Simba SL500 cultivator is used extensively – on the heavy land Mr McTaggart uses it followed by pressing, then pressing again just ahead of the drill. Lighter soils are either subsoiled, pressed and drilled or just cultivated with the SL and then drilled.

“If the soil structure is good, this is our preferred option,” he says.

“We have to use the plough quite a bit here, but tend not to for establishing cereal crops. The exception to that is before second wheats on heavier land.”

Otherwise, the plough comes out before root crops and for establishing the winter beans. “There are also occasions when we need to plough before a second cereal to help with volunteer control,” he adds.

He calculates that subsoiling costs £28/ha, while cultivating comes in at £21/ha. Ploughing is £52/ha on the light land and £56/ha on heavy soils.

The ploughing cost roughly breaks down to be two-thirds fuel and wearing part costs, with the remaining one-third being the machine and the man.

“We subsoil at least 10% of the land here, down to a depth of 12in. Soil structure is assessed in the winter, so that we can plan ahead and get the priority areas done.”

Independent agronomist Simon Draper, who carries out soil management training for Sentry, advises the managers to wait until an inch of rain has fallen before making an assessment.

“Get out in the field, look for areas of standing water and then dig with a spade.”

A depth of two spadefuls will tell you all you need to know, he says. “If the second spadeful has sideways cracking, then you know you have a plough pan. Even a narrow 1-2in pan can be a total impediment to yield.”

The use of a penetrometer in winter is good practice, he believes. “But sticks will do. They show you the point at which the roots give up. Then you know what depth to subsoil at.”

Setting the machine up correctly is important, as is forward speed. “The aim is for uniform shatter,” says Mr Draper. “The same sticks or penetrometer will allow you to check that the depth has been uniform.”

His tip to check that subsoiling is being done deep enough is to dig a hole in front of the subsoiler and put a piece of paper in the bottom of it. “Once you’ve driven over it, see if you can find the paper. It should have disappeared.”

For Ken McTaggart, subsoiling can be part of his seedbed preparation. “On the light soils, we have to be careful not to go too deep, otherwise the subsoil support is destroyed and the soils slump.”

How you buy wearing metal makes a difference to the bill

How well you buy your spares can make a huge difference to the total wearing metal bill, says Richard Peck of Sentry Product Services.

Other considerations include machinery type, the number of passes required to establish a crop and dry summers, he continues.

“A machine like the Simba SL500 has a high running cost,” he says. “It wears significant amounts, which all adds up with tips costing £15 each. And in a dry summer, more metal is worn.”

His solution has been to look at buying out of season and sourcing spares from different manufacturers. “Across all of our farms, which cover 22,000ha, it makes a significant saving.”

Recreational cultivations also add to wearing costs, he points out. “For Sentry, we have to get the right balance between cosmetics and efficiency. Don’t forget that the fields are our shop window.”

Sentry technical director Trevor Atkinson, who does the benchmarking across the business and produces management focus reports, says that farms where ploughing is used always have a higher wearing metal cost.

“Having all the data allows us to make comparisons. And it helps with decisions such as choice of equipment and operator training requirements.”