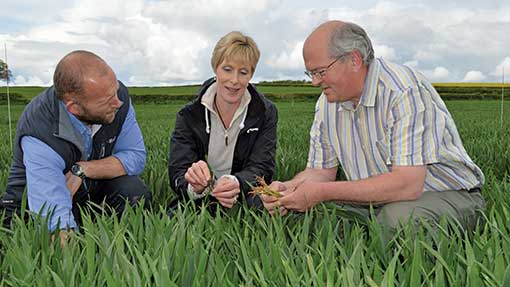 Septoria disease in winter wheat is at the worst levels in living memory, which should put growers on alert to pinpoint their fungicide sprays.

Wheat’s most yield-sapping disease was very prevalent in crops at two sites in Oxfordshire and Herefordshire we visited earlier this month accompanied by agronomists.

The disease has been encouraged by the absence of a cold, frosty winter and the recent wet weather, and experts warn that septoria can cut yields by 50% in severe cases.

Fiona Burnett, crop protection team leader at the Scottish Rural College (SRUC), warns that wheat is suffering a double whammy of the mild winter and the wet spring, and crops look worse than in the bad septoria year of 2012.

“I don’t remember septoria as far developed at this stage of the season,” she says.

Septoria leaf blotch is encouraged by heavy rainfall in April and May, and the recent rain has created conditions for its rapid spread up wheat plants.

Dr Burnett says the disease is normally present on the lower leaves of the wheat crop, but it is very unusual to see it on the upper leaves of plants at this stage of the season.

“I have not often seen septoria on leaf three so early in the year,” she adds.

The danger is that the disease will spread quickly from leaf three to leaf two and then the all-important leaf one, or flag leaf, and so disrupt the crop’s yield potential.

The spread can come from leaves touching, rain splash or can even occur in heavy dews, and Dr Burnett says if leaf three has disease lesions, leaf two is likely already infected.

Symptoms of the disease do not appear immediately on new leaves and the fungus can grow undetected for 14-28 days.

In the serious septoria year of 2012, the disease was held back by dry weather in March and early April, but then the subsequent heavy rain helped it spread rapidly.

Dr Burnett says at least growers have had plenty of warnings this season and should be aiming at getting their fungicide treatments spot on to control the disease.

The flag-leaf T2 timing in late May will be even more crucial in this high-disease-pressure year to keep the flag leaf and ear clean as their photosynthetic green area accounts for the majority of wheat’s final yield.

With disease pressure high, a SDHI/azole product will be key at the T2 timing, as this will give some “kickback“ curative action for leaf two as well as protecting the flag leaf.

Dr Burnett advises keeping the dose of the azole high to help protect the efficacy of the SDHI, after some isolates of net botch in barley were seen to be resistant to SDHI fungicides in the UK last season.

This first confirmation of SDHI resistance in the UK last month has prompted significant concern, especially if the resistance to SDHI develops in septoria.

With the curative action of the azoles steadily declining, it is important to do everything possible to prevent resistance to SDHI fungicides occurring in septoria, Dr Burnett says.

As there are only azoles and SDHIs to give control of septoria, plus the use of protectant products such as chlorothalonil, any sign that the wheat disease is becomes resistant to SDHIs would be more serious than in barley, as there are more products to control net blotch in barley. 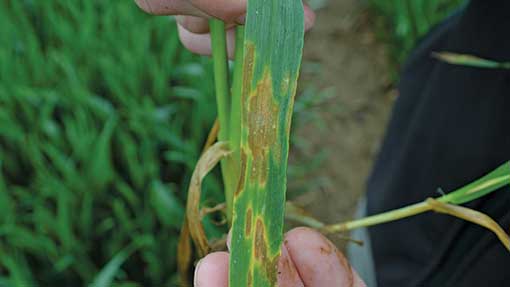 The lower leaves of a riverside wheat crop in southern Oxfordshire were plastered with septoria in what is regarded as a medium-risk disease site.

Crops untreated with fungicide showed leaf four overrun with septoria, and were in a more infected state than in the wet septoria year of 2012.

The site at Duxford Farm is on silty clay loam some 300 metres from the River Thames and 10 miles southwest of Oxford and has the potential to produce 10t/ha-plus wheat crops.

The area has a damp microclimate as the river land is surrounded by higher ground, which makes the farm more favourable to the wet-loving septoria.

“Even if it dries up now, there will be septoria ticking away in leaf two that could easily spread to the flag leaf,” says Dr Burnett.

She assesses that there was 50% leaf loss at the bottom of the plant canopy on the lower leaves due to the effect of septoria.

In the first few days of May, leaf two was largely fully emerged on the site and the T1 spray had been applied in the last week in April when leaf three was fully emerged.

Untreated plots of feed wheat on the Bayer CropScience trial site, such as Santiago and Diego, showed plenty of septoria, while those treated with T0 and T1 sprays had only the odd spot of the disease.

Both T0 and T1 treatments were azole/chlorothalonil mixtures with the first azole being tebuconazole and the second prothioconazole.

“The T1 treatment was well timed on the plots, with leaf three fully emerged,” says Adam Nears of Bayer CropScience.

He is concerned that after the good growth in early spring, the current cooler weather could increase the gap beyond the optimum three to three-and-a-half weeks between the T1 and the T2 flag leaf sprays.

Dr Burnett agrees that growers should monitor the interval between sprays and suggest timing is often more important than product choice.

She is not keen on extra spray timing, such as T1.5, as this could increase the risk of resistance to fungicides building up.

There is a need to protect azoles and SDHIs from resistance building up, and the best way to protect SDHIs is to use them with high doses of azoles.

As the T2 flag leaf timing nears, she suggests grower should look to keep dose rates high and apply at least 80% of the dose rates of the popular SDHI/azole products.

With the decline in curative action of the azoles and as SDHIs work better in a protective way, she suggests growers should take a more preventative approach.

“All products work better in a protectant mode,” she says. She says growers should counter resistance risk by mixing and alternating products and keeping application doses high.

“Alternating azoles is a really subtle tool and a good way to reduce the selection pressure,” she adds. 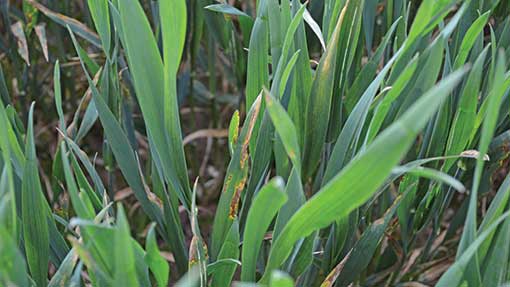 The wetter West is real septoria country and Herefordshire does not disappoint, with the bottom leaves of our wheat field site decimated by disease.

“It is one of the worst years here for septoria and we can’t afford to let the disease get established,” says independent crop consultant David Lines.

On an early site where the flag leaf is just poking out in the first days of May, it is a worry to see so much septoria on leaf three on the untreated trial plots, he adds.

In this region, Mr Lines says is it just too risky to not follow a four-spray fungicide programme to keep disease out of winter wheat crops.

“In the bottom of these crops the inoculum is there – all we need is a bit of rain and the disease will flare up,” he says.

The Bayer site is at Monkhall Farm, Callow, some three miles south of Hereford, on silty clay loam where septoria lesions covers 30% of leaf four and there are clear signs of disease on leaf three.

“It is a worry for septoria to be visible on leaf three at this stage, as it can transfer straight to the flag leaf,” says Dr Burnett.

Gareth Bubb of Bayer CropScience says septoria is worse in his region of Herefordshire than in early May of 2012.

“It’s inevitable that septoria will move up the plant – our aim is to keep it off the top leaves for as long as possible. If we have leaf three infected with septoria, the disease situation is only going to go one way,“ he says.

He argues that an early T0 spray in March is the foundation of a good spray programme and will buy a grower time to get the later T1 timing spot on.

“The importance of the T0 is that growers do not have to panic and compromise at T1,” he says.

Mr Lines believes with disease pressure high and azoles losing their curative effect, it is very important to try to protect the SDHIs.

“If we lost the SDHIs we are going to have the same situation – or even worse – that we have with chemical control of blackgrass,” he says.

Mr Lines says T2 sprays should start to be applied near 10 May in Herefordshire and a SDHI/azole product is his standard approach, with Aviator or Adexar his favoured products for his clients.

“When the flag leaf is fully emerged, we have to protect it”, he says.

On high-yield-potential crops he used an SDHI at the earlier T1 spray, arguing that the small extra cost is justified by the higher harvest yield.

He puts the cost of a SDHI mix at T1 at about £34/ha – only £5/ha more than a more traditional T2 treatment – and says in high-yield situations this approach is justified.