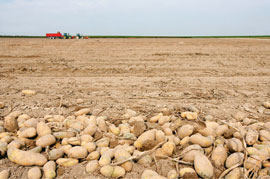 It’s a huge commitment. Pepsico’s recently announced ambition for farming – to halve the carbon and water impacts of agriculture in five years – is a challenging one. The company has calculated that 36% of the carbon footprint of a packet of Walkers crisps comes from agriculture, with almost half of that figure coming from potato growing.

As a result, it has decided to work in partnership with growers to reduce the environmental impact of potato production and show how sustainable businesses can cut costs, as well as emissions. And one of the first steps in that process is the production of the Cool Farm Tool, a farmer-friendly greenhouse gas calculator.

Jon Hillier of the University of Aberdeen, who led the development of the calculator, explains that farmers lacked practical tools to help them make improvements.

“Until now, it’s been very difficult for them to identify the most effective emission reduction practices and quantify their effects,” he says. “There are a number of uncertainties in the field, with machinery use being one of those.”

He has made the tool relevant to potato production by including specific potato machinery and having sections for storage, loading, unloading, washing, irrigation and CIPC use. “It is management focused,” he comments. “That means it can be used across all potato growing regions.”

The Cool Farm Tool is free to growers and is a great way for growers to understand more about their inputs and outputs, continues Gary Collins of Potato Council.

“All businesses need to benchmark,” he says. “What’s more, this tool allows them to look at the impacts of any changes to their production methods.”

Mr Collins adds that sustainability covers every aspect of potato production, but highlights soils and water as being two particular areas of interest.

“Keeping soil structure right and using water in the best way are both essential for sustainable production. Minimum standards are expected and are likely to become more rigorous over time.”

His colleague Chris Steele adds that compaction is the main concern with soils, much of which can be related to the timing of operations.

“This year is looking better, because the weather has been kind. Growers have been able to plant without running into any difficulties.”

But a wet August could see problems arising at harvest, he notes. “There’s some new Potato Council-funded research on shallow and deep compaction, which may help. Of course, it’s not just pre-planting and post-harvest that matter – operations carried out to the growing crop can also make a contribution.”

The run-off of soils into watercourses is a particular problem in the south west and west, mainly as a result of soil type, adds Mr Steele. “There’s no doubt growers could do better when it comes to cultivations and the timing of operations.”

The efficiency of water use is also on the agenda, especially where irrigation is required. “Rainguns work well if they’re used properly. But if the pressures and angles are wrong, they can be very wasteful.”

The trend to boom irrigation is encouraging, he believes, as the system is more efficient. “But again, if the pressures are wrong, it has an impact on droplet size, which can then give problems with soils.”

The simple replacement of an old mechanical rotary weeder has allowed Angus-based grower and contractor Dave Smith to increase his operating window and get better weed control, both of which will have sustainability benefits. 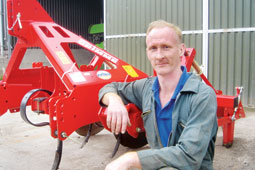 Growing around 100ha of organic potatoes for the pre-pack market, Mr Smith aims to protect yields by minimising weed populations and reducing any damaged or misshapen potatoes in the sample.

His purchase of a two-row Hiller from Grimme replaced an old weeder which had been modified to include a ridge reformer and gas weeder.

“Gas burners work well on weeds on the top of the ridge, but aren’t so good on the side or bottom of the ridge. That can mean a loss of 4-5t/acre in production. The escalating cost of the gas fuel was a further consideration.”

His new machine allows him to weed right up to the end of emergence. The option of both tine and disc operations means it can be used in most weather and soil conditions.