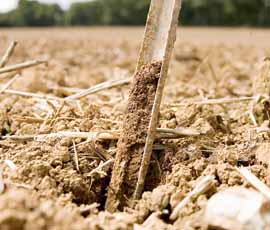 Soil mineral nitrogen testing is most likely to be worthwhile where the soil nitrogen supply is uncertain or over 160kg/ha, a recently completed HGCA project has established.

“Normal” arable situations/sites are those on medium, clay and silt soils with no history of manure application or grass and not following high N vegetables, explained Stuart Knight, director of crops and agronomy at NIAB TAG. “Soil nitrogen supply levels would be Index 3 or less (120kg/ha of N or less) with a soil organic matter content of les than 5% and is not in a high rainfall area.”

In those situations there was less than £1/ha extra profit from using soil N testing over just using standard figures obtained from The Fertiliser Manual‘s field assessment method of calculating soil N supply to calculate how much nitrogen to apply, he said. “There is no question it is not going to pay.”

But on deep, retentive clay or silt soils in medium or low rainfall areas, or where the rotation included high N vegetable crops or received manures, where soil N supply could be over 160kg/ha of N or uncertain, then soil mineral N testing produced over £8/ha extra profit from applying how much N it predicted compared with the amount suggested by field assessment method, he said.

The project also established that soil sampling in the spring to a depth of 90cm, and adjusting for N mineralisation and leaching gave the best results, but on clay and silt soils sampling to a depth of 60cm in the autumn could also be used.

Sampling in the standard “W” pattern was adequate, and 10-15 cores were generally sufficient for a field, but testing should be done as soon as possible after sampling.

Average soil mineral N levels increased by 2.5kg/ha a day, with increases larger when samples were kept at room temperature, Mr Knight said. “It is crucial to keep samples cool during storage and transport, but freezing doesn’t help reduce any increases.”

• If sampling, sample to 90cm in spring and adjust for leaching and mineralisation for best results

For more on the HGCA Agronomist Conference see our dedicated page.