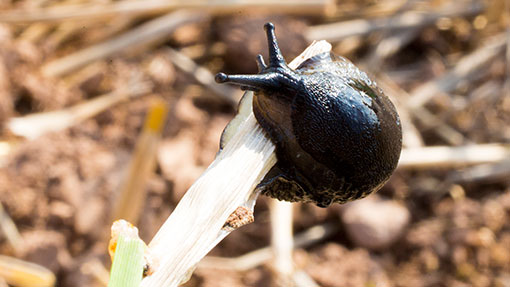 On the edge of the Somerset levels, Ben Tarr has managed to keep on top of slugs by taking a proactive approach and treating his first slug pellet application as importantly as a pre-emergence spray.

Following some high-pressure seasons and having adopted direct drilling, Mr Tarr has bumped slug control up on his list of priorities over the years.

“You cannot afford to lose control of them because they can wipe out a crop so quickly. For us the first application of slug pellets is more important than a pre-emergence spray,” he says.

Situated near the market town of Bridgwater, in the catchment zone for Wessex Water, Mr Tarr took the decision to use solely ferric phosphate products in 2008, following growing pressure on metaldehyde after this pesticide was found in watercourses.

Working closely with Wessex Water, Mr Tarr was able to address any metaldehyde exceedances in drinking water as well as maintain control on slug numbers.

“We’ve been very successful with it so far. This year it has done a great job, but the numbers are so high I may have to put another application on,” he adds.

“With metaldehyde you can go at lower rates but I don’t think you can afford to with ferric phosphate, so we always apply it at a rate of 7kg/ha,” Mr Tarr says.

Slug populations have swelled following good breeding conditions and a wet August on Mr Tarr’s Rexworthy Farm and he has kept a close eye numbers by baiting stubbles and drilled fields, as well as monitoring all his fields daily. 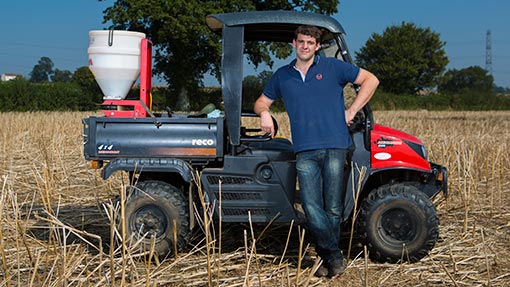 He uses ferric phosphate on his oilseed rape crops as they are very vulnerable as young seedlings to slugs, and his aim is to get the plants to the four-true-leaf-stage as quickly as possible.

With each slug having the potential to kill up to 50 seeds in the first week after sowing, Mr Tarr admits every step in controlling them is vital. He uses 6m rolls with hydraulic powered paddles to spread any trash post harvest, killing slugs and exposing any eggs to the sun.

“We have never lost a crop because we think with the system we use we are alert to the problem and therefore are proactive in preventing it from happening straight away,” he says.

He highlights that despite his move to direct drilling possibly increasing the slug pressure, he has reaped the rewards of the system, with savings of up to £60/ha on establishment costs as well as improving his soils and helping the environment by reducing soil erosion.

“It does require more attention but cost wise, slug control is relatively small, especially when you look at the savings and benefits we get from this system,” he adds.

Ferric phosphate is sold under the brand names Sluxx and Derrex from agrochemical company Certis, who also produce metaldehyde products.

Robert Lidstone of Certis, says the pellets will take a different mind-set from growers, with slugs taking a bit longer to die and going underground, making it difficult to find any dead ones.

“They stop feeding almost immediately preventing any further damage to the crop,” he explains.

Growers can use a maximum rate of 7kg/ha of Sluxx, which contains 3% ferric phosphate. There is also a maximum total dose of 28kg/ha per crop.

Over the coming weeks growers will need to closely monitor crops with high numbers of slug numbers being seen, according to independent slug expert David Glenn.

He advises growers to ensure they are spraying off any volunteers prior to cereal drilling and stresses rolling after drilling will be crucial to consolidate the seed-bed.

“It is going to depend on the weather over the coming weeks but it will vital to get a good seed-bed to protect the seed from slugs, especially wheat seed which is very vulnerable to slug damage,” he says.

The future of slug control

Arable growers may follow their horticultural counterparts in their future efforts to control slugs using natural predators to tackle them.

Microscopic worm-like nematodes are used to control a wide range of pests in horticultural crops, but there is one type that could prove particularly useful to arable farmers.

Sold under the product name of Nemaslug, this one species of nematodes offers biological control on a wide range of slug species.

Specialist company Becker Underwood, which is now part of BASF, has developed the product, which is already being used in high value crops such as potatoes.

Rob Storer of BASF says it could provide a vital tool in slug control in the future as other methods come under restrictions.

“The nematode products work very well; the issue is rolling it out into broad-acre crops which may be a challenge but we are working on it,” he says.

Although the cost would be higher than current slug control, Mr Storer says the product has the capacity to be sprayed on to crops, and he points out that work is already looking at applications with band sprayers to enable more precise applications.

“BASF spend a lot of investment and we wouldn’t have done it without seeing potential. We are looking at supplying holistic integrated solutions but they will take time to develop,” he adds.