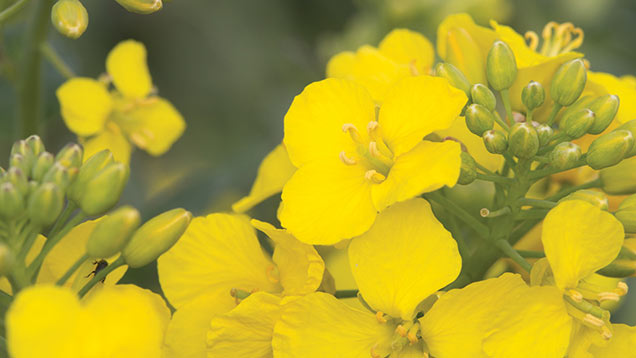 While the launch of the current oilseed rape lists was dominated by a speciality oil variety, a mix of hybrids and conventional types make up the five varieties to look out for next season.

“The top dozen or so names on the East/West and North lists are more than adequate. But there are a few that are worth a closer look.

Find out more about the new generation of wheat, oilseed rape and barley varieties and see them for yourself at this year’s Cereals event on 10 and 11 June at Boothby Graffoe, near Lincoln. Book tickets for Cereals 2015 and keep up to date with all the latest news on FWi

Its position in joint second place on the East/West list and top spot in the North shows newly recommended hybrid SY Harnas is a well-adapted UK variety, says Mr Kightley.

UK-wide appeal and superior disease resistance puts it ahead of Popular, he believes, despite Popular’s higher oil content.

“They both have a gross output of 107% and good resistance to lodging, but Harnas has a 7 for light leaf spot and a 6 for stem canker. That’s good news for growers.

“The competition between hybrids and the latest open-pollinated lines is still very much on,” he says.
Mr Kightley selects it over the other new conventional variety, Picto, for its better disease resistance. “It is good to see that some of the disease resistance scores in the new varieties have gone up.

“It too has given a good performance in both regions,” he says. “Incentive isn’t too tall for a hybrid and has really good standing ability.”

However, it’s not great for stem canker, with a rating of 4, he warns.

An insurance variety for wet years is how Mr Kightley describes the conventional variety Charger.

“It’s nice and short, with really good stem stiffness,” he says. “It is this standing ability and ease of management that make it a priority choice variety.”

Very early flowering and medium maturity are other attributes, he adds. “But it has 4s for both light leaf spot and stem canker.”

A hybrid variety for the premium Holl (high-oleic, low-linolenic market) variety V316OL burst on to the scene last summer, topping the RL rankings and performing very well in most trials.

“It always looked promising as a candidate,” he says. “Now it sits at the head of the East/West region list with a gross output of 109% and second equal on the North list with 111% of controls.”

Premiums will be paid for the new variety, due to the food industry demand for its different oil profile, he adds. “It is a developing market that needs more supply.”