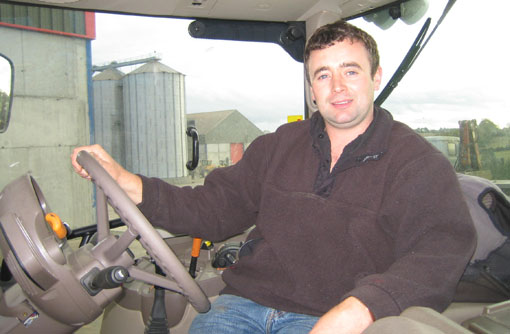 The dry weather arrived just in time and the 810ha of spring barley was drilled in ideal conditions at the end of March.

The Sprint drill performed consistently well and the crop was drilled in seven days. I took the late shift and did all my sowing in the dark this year, thankfully it has all emerged and there were no blank landing strips for the crows.

This crop has emerged evenly and is growing strongly in spite of the cool, damp weather. The addition of 60 units of nitrogen in the seed-bed gives the crop growth the necessary kick-start, without relying fully on the top dressing to drive growth. The balance of N will then be applied in one split. The spreader will be calibrated and tray tested each day to ensure an even spread pattern is being consistently achieved over the 27m spread width. The calcium ammonion nitrate (27% N) is all from the same source, ensuring consistency and eliminating any variation in flow rates and the spread pattern. Straight nitrogen is being used, as the sulphur requirement of the crop was applied in the seed-bed by using sulphate of potash.

The weeds will be sprayed with Calibre (thifensulfuron + tribenuron) and Galaxy (clopyralid + florasulam + fluroxypyr). This will give a broad spectrum weed control, particularly the problem weeds like corn marigold, chickweed and cleavers. Axial (pinoxaden) will also be included to control wild oats, and Coyote (prothioconazole + fluoxastrobin + trifloxystrobin) will give early disease protection against net blotch and rynchosporium until the traditional T1 timing.

The robust T0 application of Capalo (epoxiconazole + fenpropimorph + metrafenone) on the winter wheat has been justified, as the cool weather has slowed down the emergence of the third-to-last leaf. The slower growth has meant that the T1 has returned to its normal timing for this area at the end of April.