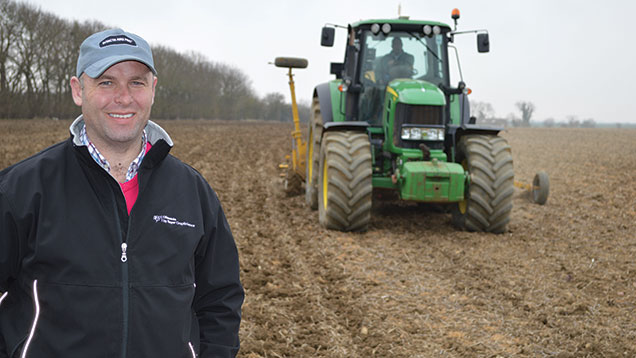 Russell McKenzie is determined to beat blackgrass before it defeats him and his chosen weapon is rotation.

Armed with his experience from a Nuffield travel scholarship, he is looking at a range of new spring-sown crops such as barley, wheat and beans to keep the troublesome grassweed at bay.

A tight winter wheat-oilseed rape rotation on his heavy clay Cambridgeshire land had seen blackgrass become a problem on some fields and he didn’t want to lose control.

The rising cost of growing oilseed rape and falling price of rapeseed and wheat, as well as the blackgrass battle, has forced him into a change as profit margins come under pressure.

“We are looking for blackgrass control from rotation, stale seed-beds and cover crops rather than from chemicals,” he tells Farmers Weekly.

Stale seed-beds to encourage blackgrass to germinate, which can then be sprayed off with a herbicide, have helped, but the use of cover crops that can aid soil structure look an even bigger success.

Russell McKenzie is one of four HGCA monitor farmers in the east of England who were appointed with the aim of bringing together groups of like-minded farmers who wish to develop or expand their enterprises in an environment that encourages them to share critical performance information.

The use of a seven-way cover crop mix including vetches, linseed and black oats sown straight after winter wheat is harvested have improved the soil ahead of a succeeding spring-sown crop.

Mr McKenzie is just back from his study tour looking at direct drilling in extreme weather conditions from dusty, dry Australian fields to the wet, semi-tropical lands of Brazil, and the message was clear.

“It was all about rotation, rotation and rotation, and very much organic-matter driven,” he says.

This is reflected in his new approach on the 766ha of arable land he farms from Howson’s Lodge, Old Weston, 10 miles north-west of Huntingdon in Cambridgeshire.

He was determined to look long term and take some of the pressure off his pre-emergence herbicide sprays in the autumn.

His three-year rotation of oilseed rape-winter wheat-winter wheat served him well when rapeseed was trading at £340/t and feed wheat £150/t, but times and prices have changed.

This old system was simple and worked well, but margins had come under pressure with rapeseed and wheat now at £250/t and £110/t, and the cost of controlling blackgrass was ever rising.

“This was a wake-up call. If nothing changed and we didn’t break the cycle of autumn cropping, then it was going to be difficult to control blackgrass,” he says.

The move to spring cropping was to give time to control blackgrass in the autumn and early spring before drilling barley, wheat or beans. The option of delayed drilling in the autumn is limited on his heavy land.

“We need to get back in control of blackgrass and give our herbicides a helping hand,” Mr McKenzie adds.

He had not seen a fall in yield from his five-year average of just under 10t/ha for wheat and 4.25t/ha for rapeseed, but costs, mainly on herbicides, were mounting.

His worst blackgrass field was drilled with spring barley in late March this year, replacing a second wheat as this is the most competitive of the spring-sown options to help crowd out the grassweed.

Mr McKenzie is on a learning curve with spring cropping, and has tried cultivations and two sprays of glyphosate herbicide to control blackgrass through the autumn and early spring.

He has gone for 37ha of spring barley, all down to the malting variety Propino, although he admits he is unlikely to get a malting sample on his heavy land so will aim for a high yield of feed-quality barley.

He is hoping for a conservative yield of 6.5t/ha using up to 150kg/ha of nitrogen, which compares unfavourably with a typical 8.5t/ha second wheat yield, but it will be much cheaper to grow in terms of fertiliser and sprays.

On a second block, he is experimenting with spring wheat variety Mulika, which is not as competitive as spring barley and later to harvest, but is set to earn a higher price as a milling sample.

Ahead of the spring wheat, he drilled a cover crop straight after the previous winter wheat was harvested in late August, and a neighbour’s sheep have grazed it off over the winter.

He was pleasantly surprised at the drier conditions of the land after the overwintered cover crop compared with the stale seed-bed technique, where some of his land had shown signs of slumping.

The integration of livestock into arable systems was a key feature of his travels, which took in Argentina, the US and New Zealand as well as Brazil and Australia.

“The sheep grazing system has worked well, with the sheep tugging at the cover crop also improving the soil structure,” he says.

The cover crop was sprayed off with glyphosate before being direct drilled with the spring wheat.

If his spring barley and spring wheat prove only a partial success at blackgrass control, he is prepared to go for a double spring break with beans, which thrive on his heavy soils.

Spring beans have been grown on the farm for four years as a replacement for some oilseed rape and have seen a five-year average yield of 5.4t/ha, and in the difficult, wet harvest of 2012, the crop gave him his highest gross margin on the farm.

Spring beans have been key in extending the oilseed rape rotation from one-in-three to one-in-four or even one-in-five, and he has seen better vigour from his oilseed rape in the longer rotation.

The rapeseed crop is getting expensive to grow and is proving not to be a good cleaning crop in the rotation to get rid of weeds.

Mr McKenzie says he looks for an oilseed rape yield of 3.75t/ha just to break even, and although yields have crept up and he has fields where crops have topped 5t/ha in some years, the average yield across the farm has not reached 5t/ha.

Finally, he is growing hybrid winter barley to test out its powers of competitiveness, and if it can yield 9.5-10.0t/ha it will look an interesting crop for the future, he says.