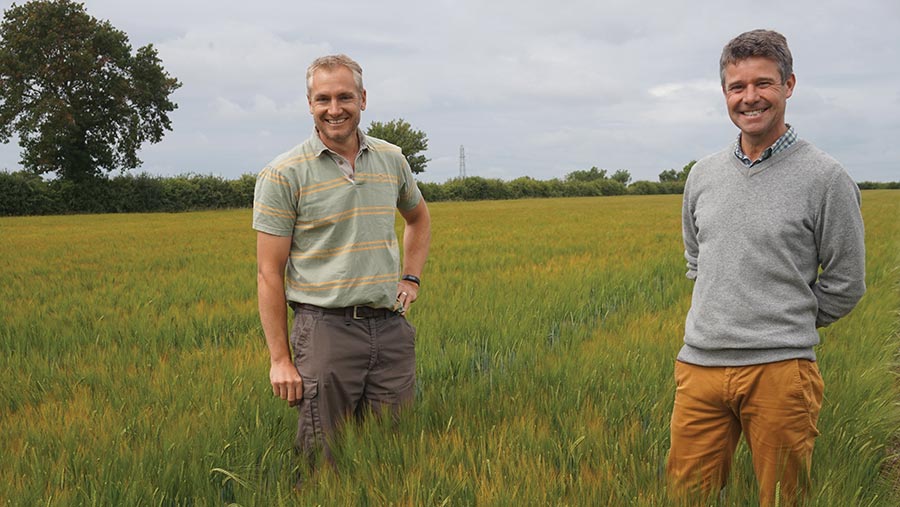 The first in a regional network of Helix demonstration farms, Suffolk host farmer Tom Jewers is working alongside agronomy company Hutchinsons to test the value and benefits of new technologies in a practical setting.

With five projects already under way at GD Jewers & Son in Rattlesden, the overall aim of the initiative is to develop advice to help deliver financial and environmental sustainability, so that farm businesses are prepared for the post-Brexit future.

For Mr Jewers, having the trials done on his farm is an opportunity to explore the latest developments without risk to his business, while Hutchinsons has a platform to show how it will deliver relevant products and services to the farming industry

As Bob Bulmer, trials and technical manager at Hutchinsons, explains, the projects all work on an “improve or remove” basis, so that raising farm performance and profitability remains the focus as new methods are introduced and assessed.

“They also all link strongly to integrated crop management, which we know will be a key requirement for farming systems in the future – whether it comes from the consumer, via the supply chain or by regulation,” he says.

To demonstrate this, he highlights the Predict and Justify work, which brings together crop modelling, climate tools and historical data to help with accurate pest and disease forecasting, as well as spray timing.

“Proactive decision-making can really help with issues such as barley yellow dwarf virus and potato blight, as both are influenced by seasonal factors as well as on-farm logistics,” he says.

“A better understanding of where risks exist, based on accurate and timely data, helps to justify and plan any required treatments. It also allows farm- and field-specific threshold levels to be developed – an improvement on current practice.”

Other trials already in the ground at Wood Hall Farm include work in spring barley, where three different seed rates and two phosphate products are being investigated.

“Getting ear numbers is really important in spring barley, so if plants don’t establish well and produce tillers, yield is compromised,” explains Dr Bulmer. “Higher seed rates might help with this, but have to be balanced with other agronomic considerations.”

The role of phosphate in getting a good root system established is well understood, so a comparison is under way between triple super phosphate and a biological product, Rise P, which adds a particular strain of bacteria to the soil.

“The claim is that the bacteria colonise the roots and help to solubilise phosphorous, making it available to the plant,” he says.

Tissue tests conducted during the growing season have shown differences in leaf P levels, he confirms, so yield maps will reveal if there are any lasting benefits.

In winter wheat, yield prediction work is being done by monitoring components such as establishment, plant and tiller numbers, while also conducting soil, tissue and grain analysis in crops receiving different nitrogen rates.

Another trial in wheat is investigating the use of prohexadione as a plant growth regulator and a slow-release nitrogen product.

“Recent dry springs have been difficult for the timing of growth regulator applications,” notes Mr Bulmer. “These types of products give the option for a little-and-often approach, which may remove the late season lodging risk that tends to follow a dry start to the growing season.”

Given the greater emphasis being put on the environment, Helix East host farmer Tom Jewers has been making gradual changes to the way he farms for the past five years.

Working with his Hutchinsons agronomist Mike Greener, he has been reducing cultivations, targeting resources according to crop potential, and looking for ways to either reduce or make better use of inputs on the 240ha farm, which produces cereals, oilseeds and pulses.

“Like most farmers, I want to know how I can reduce my reliance on inputs without reducing margin or increasing my exposure to risk,” he says.

For this reason, he is keen to look at variety blends as a means of managing disease and would like to investigate whether foliar nutrition can be used to replace certain inputs or improve nitrogen use efficiency.

As an early supporter of the Small Robot Company, Mr Jewers is also eager to understand how AI can be used to best effect on his farm and whether it can bring efficiency improvements at a price he can afford.

Countryside stewardship options which can either form part of a reworked arable rotation or help with poor-performing areas of the farm are also on his agenda, with 14 blocks already located around the farm on areas that were previously giving a low return.

“As we move to a public money for public goods system, these options are taking on a new importance as an income source. It will be good to know more about how they can work on this farm before they become standard practice,” he says.

Further ahead, he is contemplating whether he will be able to abandon cultivations completely, establish a permanent mulch or soil cover to minimise the use of herbicides, and reduce the amount of nitrogen he needs to apply to high-yielding crops.

“These practices might be too ambitious with current technologies,” he acknowledges. “Hosting the Helix East site will give me opportunities to look at new innovations and assess their potential on my own farm.”

Helix is a farm-based research project developed by Hutchinsons which links technology, knowledge and advice for sustainable farming.

The central hub is the Helix Technology Development Farm at Whiston in Northamptonshire, which is hosted by Andrew and William Pitts and has been operating since 2019. Here, initial work on new tools is done before they can be developed and implemented further.

Stuart Hill, head of technology and innovation at Hutchinsons, explains that there is a huge number of new technologies available – covering robotics, autonomy, data analytics, sensors and novel monitoring systems – all of which may be relevant to modern farming businesses facing a rapid pace of change.

“The question that we need to answer with all of these is whether or not they have a benefit at the farm level,” he says. “That means looking at whether they are affordable, practical and capable of improving current practice.

“This is where our regional farm sites come in, as they allow farm-scale work on these developments and then provide the backdrop to demonstrate our findings.”

The regional farm network is set to expand beyond Suffolk, he reveals, with sites in the north and central England due to be announced later this year.