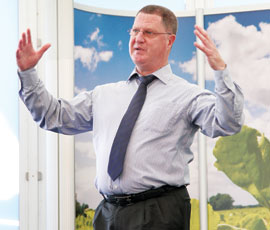 Sugar beet growers have been offered a contract price of £27.53/t for the 2012 crop, as part of a number of changes announced by British Sugar’s managing director Gino De Jaegher at Cereals 2011.

The price is around £4/t above the 2010/11 campaign and is based on the formula introduced last year, taking into account rising costs, the upturn in wheat prices and exchange rate fluctuations. Contract offers will be posted to growers shortly and must be returned by the end of July.

As part of the 2012 offer, British Sugar said contract tonnage entitlements would be increased by 2.5% for every grower in a bid to secure adequate supplies after the troubled 2010/11 campaign.

It is also looking for 500,000 tonnes of extra tonnage for industrial use, such as its bioethanol plant at Wissington in Norfolk. A separate price, linked to the contract price, of £26.50/t has been offered for this industrial tonnage and growers will be able to choose how much, if any, extra beet they want to grow.

British Sugar also said that from the 2011/12 campaign, manual crowning of beet in the tarehouse will end and a fixed crown tare adjustment of 6.77% will be applied to all deliveries. Any material delivered over the 6.77% will therefore be paid at the full beet price in 2011/12, including haulage and delivery bonus.

“The previous campaign has definitely had its challenges for growers and processors, but we’ve learnt from it and made major progress in a number of areas,” Mr De Jaegher said. “Over the long-term, we feel the new price will cover costs and give a better return than other broad-acre crops and by moving to whole beet delivery, we want to incentivise farmers not to leave beet in the field.”

If demand for the industrial contract is oversubscribed, he said priority would be given to growers within 30 miles of factories and to those who bought extra tonnage through the outgoers scheme. He, and NFU sugar chairman William Martin reassured growers the industrial contract would not drag out the campaign and compromise other growers.

The 2012 beet campaign is set to start earlier to help cope with the extra tonnage, with all factories due to open from mid-September. “Long campaigns are here to stay, but hopefully by starting earlier, they should finish earlier,” Mr De Jaegher added.