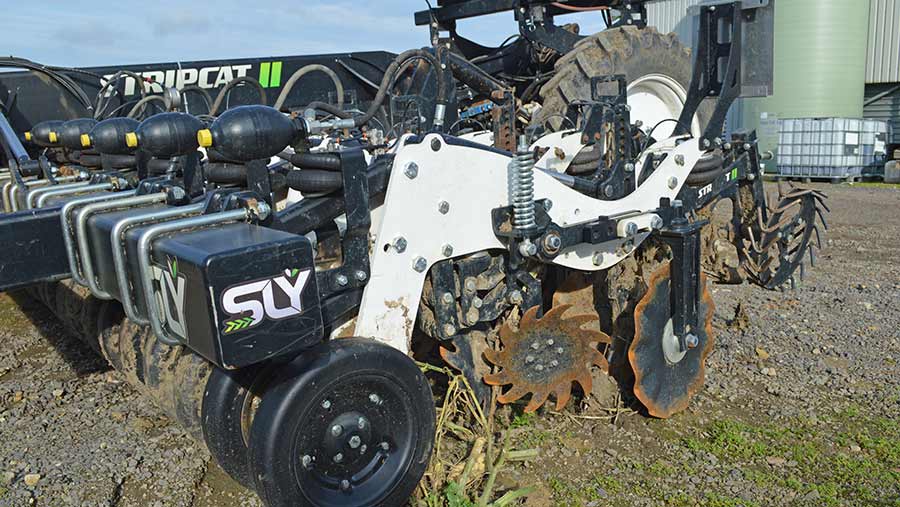 George Sly is slashing the cost of growing sugar beet by using a strip-till cultivator he designed himself, which is also improving his heavy Lincolnshire silty soils.

His machine can cultivate a strip of land soon after harvesting a preceding cereals crop, sow a cover crop at the same time, and then drill beet in the cultivated strip the following spring.

With no ploughing or heavy cultivation, costs are reduced dramatically, while later in the season the sugar beet is harvested by machines working on unploughed land, leaving fewer damaging wheelings.

See also: Why strip-till is key part of one farmer’s cultivations approach

He has just harvested his second crop of beet on the farm, and the strip-till technique is cutting diesel costs by 50 litres/ha. Placing fertiliser only in the cultivated strip offers another 30% saving without compromising yields.

“I am cutting machinery, fuel and labour costs, and improving the soil, even with intensive crops like sugar beet and maize,” Mr Sly says. 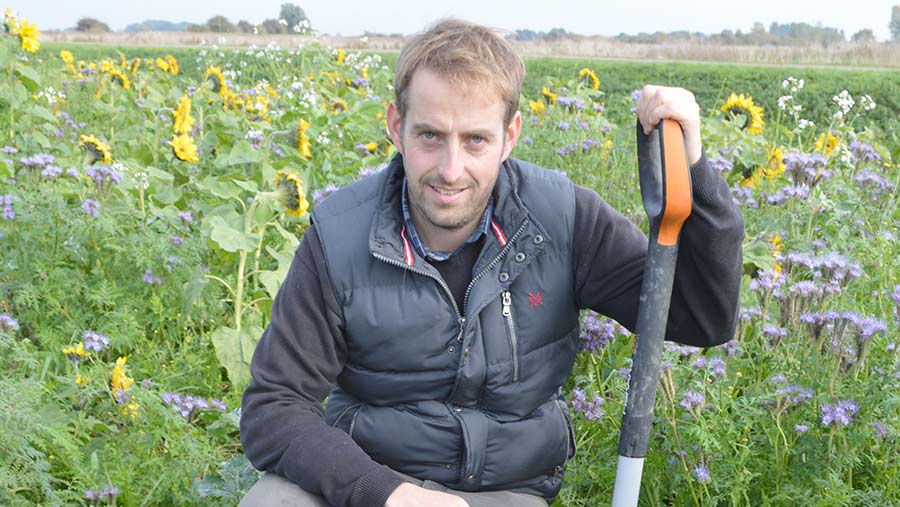 He built his own Stripcat cultivator to create a pathway and narrow seed-bed through the previous crop’s residue, and – unlike other similar techniques – moves the residue between the tilled rows to protect the soil.,

This has allowed him to reduce herbicide costs. He only uses one weedkiller spray on the beet, as he is not moving much soil which would allow weed seeds to germinate. Cover crops are also often used between the rows to suppress weeds.

Mr Sly’s enthusiasm for cover crops has prompted him to try out an exotic mix of sunflowers, phacelia and fodder radish this autumn, as he looks to increase the organic matter of his fertile soils.

“My most important crops are cover crops, rather than cash crops, as they are the soil improvers. The cover crops fix carbon and help prepare the seed-bed,” he adds. 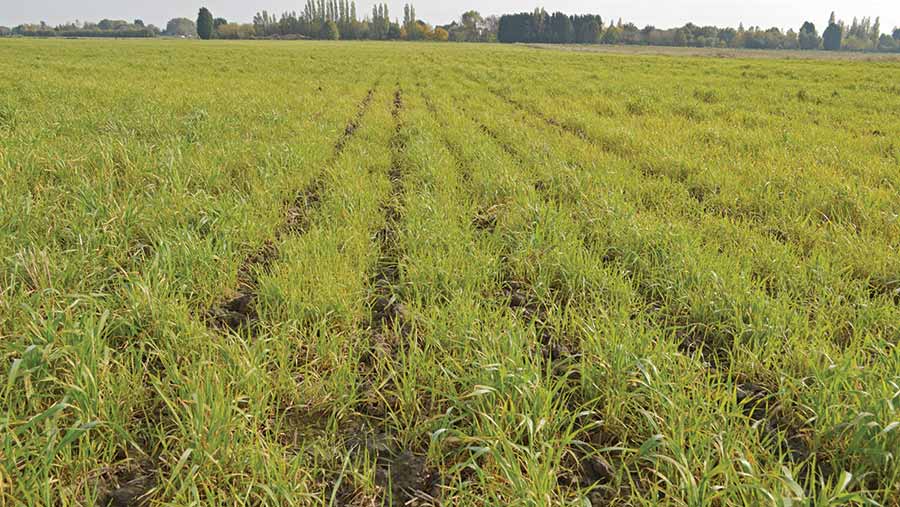 Strip-tilling ahead of maize

The move to strip-till means he can prepare land for sugar beet, maize and oilseed rape with just one machine and then sow these crops with a drill of his own design at Langary Gate Farm, mid-way between Spalding and Wisbech, on the very southern edge of Lincolnshire..

Mr Sly first got the idea for his strip-till from the US, where it was largely used to place fertiliser just below the seed. He began importing machinery in 2009, before starting to produce his own machine at his family’s company, Sly Agri.

The technique depends on soil type. Mr Sly recommends that heavy land with more than 20% clay content should be autumn strip-tilled, while strip-tilling can be left until the spring for lighter soils.

The most basic four-row machine, working at 45cm row spacings, costs about £13,000, with the range going up to 16 rows. A seeding unit can be added for oilseed rape drilling.

Mr Sly is now planning his third crop of sugar beet on the 280ha family farm. Cereal fields destined for sugar beet are strip-cultivated in August, a few days after the cereal crop is harvested and the straw chopped.

With a cover crop sown at the same time, the field is completely green by October.

Strip-till is a conservation system that uses minimum tillage. It combines the soil-drying and warming benefits of conventional tillage with the soil-protecting advantages of no-till by disturbing only the portion of the soil that is to contain the seed.

He aims to spray off the cover crop with glyphosate in late January/early February. If glyphosate is ever restricted in the future, Mr Sly has plans to try crimping the cover crop to give an inter-row mulch or use clover, and then mow it to restrict its growth and release nitrogen.

One problem is that the system does not produce a table-top-flat sugar beet seed-bed, as with traditional ploughing and heavy cultivations, so he has built his own drill to carefully monitor the depth of the seed.

His 10ha of sugar beet is grown with just one herbicide, one fungicide and no insecticides. Other variable costs include seed and seed-bed fertiliser.

“We are aiming to maintain the yield at conventional levels for much lower growing costs,” he says.

One big advantage with the system is that land strip-tilled holds on to moisture better than that which has been ploughed, so is well adapted for dry springs, when traditionally worked seed-beds can dry out very quickly.

Mr Sly believes it is a lot easier to lift the beet without causing a plethora of wheeling, although in a dry autumn, sugar beet could be more difficult to lift.

His 80ha maize crop is grown the same way, with strip-till in the autumn in a “cover crop” of largely spring barley volunteers. Drilling takes place in the spring with seed-bed fertiliser and only one herbicide used.

This was especially good, as one-third of his maize was under water for a week in June, when flooding hit Lincolnshire.